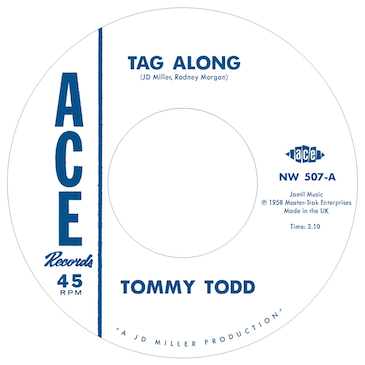 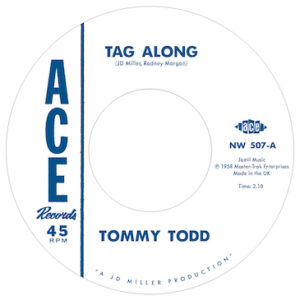 Rockabilly – some of the most hedonistic, libidinous and primal music ever created by mortal man. It came from the deep south of America, a highly potent and combustible 1950s mix of R&B, country, hillbilly, folk, blues and any other three-chord music that happened to be lying around. In the case of these three fantastic 7-inch singles from Ace, released at the request of collectors and previously featured on Ace’s critically acclaimed Bobbin’ By The Bayou CD series (compiled and noted by Ian Saddler), Louisiana swamp pop and Cajun bop are also in the mix.

Issued from the hallowed vaults of J.D Miller, these astonishing singles feature some of the greatest flaming hellion practitioners of the riotous dark art of rockabilly. On the first 45 Tommy Todd (real name Clifford Trahan), offers a raw, rockin’ version of ‘Tag Along’, with a blasting guitar break and unhinged hick-up vocals at the close. Of all the tracks released here, ‘Tag Along’ was the sole recording issued, as a single on J.D. Miler’s Zynn label, but only a handful are known to exist. The B-side is equally gone; the mysterious Wiley Jeffers with the grinding ‘She’s Coming Back Again’.
The second single is pure, classic rockabilly – Johnny Jano’s spirited ‘Rock-A-Me Lulu’. Jano (real name John Janot) was one of the first ‘unknown’ rockabilly singers rediscovered by European rockabilly devotees in the 60s and 70s, though this never brought him success. The flipside, which was included on the second 2013 Boppin’ By The Bayou CD, is the previously unreleased, primal rocker ‘Carry On’ by Rusty Kershaw. Rusty was part of a double act with his brother Doug, who usually sang the vocals. This is self-evident on the roughhouse ‘Carry On’. In 1964 Doug Kershaw became a famous country and western singer, but Doug, who died in 2001, sadly faded from public view. The propulsive, hand clapping ‘Carry On’ is arguably the best number in this batch of white-hot releases.

The third 45, drawn from the 2013 Volume 5 Boppin’ By The Bayou CD, is as magnificent as the other singles. Claylet Rodney ‘Rocket’ Morgan’s ‘Gonna Walk Back Home’ is a cool strolling’ number with its sights fixed firmly upon dancefloor action. Rocket Morgan possessed an incredible rockabilly voice, but he would regrettably leave the rockin’ profession and become a preacher, like his father before him. The flip is equally as inspiring. The aptly named Johnny Bass, a hillbilly singer from Oklahoma who wound up recording this demo for Miller, delivers a highly danceable rockabilly slap-bass tour de force, ‘Rockin’ And Reelin’’.

If the late, great Lux Interior still drew breath, you can be sure that he would purchase these singles without a moment’s hesitation. You should too. These singles are so strong that they could instigate yet another rockabilly revival.

A belated, but very welcome, third follow up in Ace’s superb series of CDs honouring the late, great producer, arranger, songwriter, film soundtrack composer and musician, Jack Nitzsche (1937- 2000) Compiled and noted by Mick Patrick with Tony Rounce, Night Walker is every bit as exciting as the previous Ace Nitzsche volumes, Hearing Is Believing (2005) and Hard Workin’ Man (2006), featuring several selections that they were previously unable to licence.

Beginning with Nitzsche’s final session as a producer on C.C. Adcock’s searing and spooked out version of The Pirates’ ‘Castin’ My Spell’ and ending with the first record to bare the song writer’s name until the title, Preston Epps’ 1960 swingin’ version of Nitzsche’s instrumental ‘Bongo Bongo Bongo’, Night Walker covers all avenues of his career. The sheer diversity of the material gives some impression of Nitzsche’s artistic achievements.

Highlights include a section of Nitzsche’s electrifying 1970 score for Donald Cammell’s dark, cinematic masterpiece, Performance; the dynamic blues ‘Poor White Hound Dog, featuring remarkable vocal stylings of Merry Clayton. Nitzsche’s extensive arrangement work with producer Phil Spector is represent with Darlene Love’s beautiful rendition of the Gerry Goffin/Carole King number ‘Along Way To Be Happy’ and the same songwriters ‘Is This What I Get For Loving You?’ for The Ronettes.

Together with a Nitzsche arrangement of a 1968 Lee Hazlewood production of the girl group Honey Ltd performing Richard Berry’s anthemic ‘Louie, Louie’, his astonishing orchestral arrangement and production work on The Buffalo Springfield’s 1967 single ‘Expecting To Fly’ and the twanging 1965 Nitzsche instrumental title track, Night Walker is the ideal introduction to the man’s illustrious career.

A long overdue third volume of out-takes, never before released on CD, by the great yet generally unsung R&B and blues guitarist/singer, Pee Wee Crayton. Compiled and noted by Dick Shurman, and dedicated to the memory of the Texan born Crayton and celebrated Ace researcher/archivist Ray Topping (whose work formed the basis of previous Ace Pee Wee Crayton album compilations), Texas Blues In Los Angeles is obviously a labour of love that will hopefully introduce the guitarist’s legacy to a much wider audience.

Covering the years from 1948 until 1951, during which Pee Wee Crayton was recording for Modern Records, these tracks are the quintessence of sophisticated yet emotionally raw urban blues. The selections on Texas Blues In Los Angeles perfectly reflect Crayton’s trademark style of contrasting his mellifluous vocal with his urgent, abrasive guitar interjections.

Among the highlights here are a previous unreleased, horn powered version of Crayton’s great 1948 instrumental hit, ‘Blues After Hours’ (memorably deployed on the soundtrack of Carl Franklin’s 1995 movie adaptation of Walter Mosley’s 1940s LA set crime novel, Devil in a Blue Dress), in which the guitarist’s guitar breaks the air of desolation with even more savagery. The B-side, a version of T-Bone Walker’s bittersweet ballad ‘I’m Still In Love With You’, reflects the melancholic side of the guitarist’s music, as does Crayton’s own blues ‘When Darkness Falls’, while the frantic instrumental ‘Texas Hop’, the jubilant ‘Huckle Boogie’ and the jumpin’ ‘Poppa Stoppa’ (all previously unreleased versions) amply display the polar opposite. 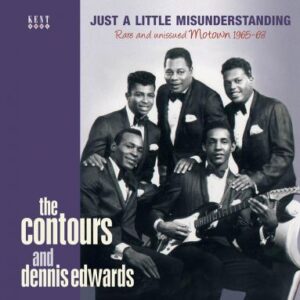 The Contours and Dennis Edwards – Just A Little Misunderstanding: Rare and unissued Motown 1965-68.

Despite scoring a massive Motown hit with Berry Gordy’s up tempo number ‘Do You Love Me?’ (a song frequently covered live and recorded by Johnny Thunders and The Heartbreakers in the late 70s), The Contours never again enjoyed the same level of success as other groups on the label. This second Ace compilation of The Contours, the previous being 2011s Dance With The Contours, compiled and noted by Keith Hughes with Tony Rounce, exposes the wealth of fine of material the vocal group recorded from the mid 1960s until 1968.

As outlined by Hughes in his detailed overview of the group’s complex history in the accompanying booklet, the superb 10 tracks that open this CD are believed to have been originally intended for a Contours album, entitled It’s So Hard Being A Loser. The track ‘It’s So Hard Being A Loser’, a second version of their humorous money fixated 1965 Gordy single ‘First I Look At The Purse’, the strident ‘Determination’ and their joyous 1966 comeback hit ‘Just A Little Misunderstanding’ are classic Motown of the first order.

The remaining six Contours tracks, and the ten solo (many previously unissued) performances recorded by The Contours’ lead singer Dennis Edwards, after leaving the group (including a soulful cover of Bobby Herb’s ‘Sunny’) and joining The Temptations in 1968, are equally exhilarating.

Timeless, jubilant music, Just A Little Misunderstanding is an essential purchase for all Motown fans.

Singer/guitarist Little Milton (James Milton Campbell, 1934 – 2005) followed a circuitous root to fame and soul. At the start of his career he performed together with Ike Turner and Sony Boy Williamson, recording blues influenced by B.B. King for Sun, Trumpet and Meteor, before recording for Chess Records in 1961. Little Milton finally had a massive 1965 hit with his ninth Chess single, the soulful blues ‘We’re Gonna Make It’. The following year Chess released the classic R&B album Little Milton Sings Big Blues.

Now in 2014, Ace have assembled a collection of 18 of Milton’s soulful recordings made during a near 20 year period as a recording artist at the independent Malaco Records; Little Milton Sings Big Soul. Dating from the early 1980s through to the end of the 1990s these cuts, compiled and noted by Tony Rounce with Bob Fisher, shadow the soul direction that Little Milton’s vocation took after leaving Chess and the collapse of his next label, Stax, in the mid 70s.

Performing rousing versions of numbers written by southern soul masters, such as George Jackson (‘Strugglin’ Lady’), Frederick Knight (‘This Time They Told The Truth’), Tony Joe White (‘A Rainy Night In Georgia’) and Isaac Hayes & David Porter (‘Can’t Trust Your Neighbour’), Little Milton displays that he was just as adept at soul as the blues. Remarkably, he manages to seize Etta James’ signature tune, ‘I’d Rather Go Blind’, and O.V. Wright’s classic ‘A Nickel And A Nail’, making them his own. Milton even re-recorded his smash ‘We’re Gonna Make It’, 20 years after it first hit the charts, delivering a fresh and current reading.

Whether you’re a soul or blues devotee, Little Milton Sings Big Soul is guaranteed to satisfy.