Various Artists – Shazam! and other instrumentals written by Lee Hazlewood 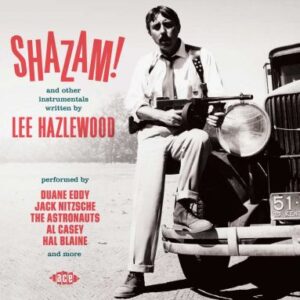 The late, great singer songwriter Lee Hazlewood’s duets with his most famous singing partner, Nancy Sinatra, made a huge splash during the 1960s. Yet it was with groundbreaking instrumental rock ‘n’ roll that Hazlewood first made a substantial impact in the 1950s.

Compiled by Mick Patrick, with extensive booklet notes by Dave Burke and Alan Taylor of Pipeline magazine, the excellent Shazam! CD charts Lee Hazlewood’s instrumental work, and assimilation’s of it, from the late 1950’s and throughout the 1960’s. Shazam! compliments Ace’s previous Hazlewood releases, Califia: The Songs Of Lee Hazlewood, These Boots Are Made For Walkin’; The Complete MGM Recordings (compiled by Rob Finnis and Jim Grant) and the incredibly rare late 1970’s album (only a hundred copies where pressed on vinyl) Movin’ On.

Born on 9th July 1929 in Oklahoma, Lee and family travelled all across the South West of America, as his father Gabriel was working on the oil fields before the start of World War II. Hazlewood’s studies at Southern Methodist University were interrupted when he was drafted into the US Army, in which he saw active service during the Korean War. After the war, Hazlewood and his wife Naomi set up home in Pasadena California, where he studied vocal technique at the Don Martin School of Broadcasting.

In 1954, future superstar guitarist Duane Eddy was attending high school in Coolidge, Arizona, a small desert town near Phoenix. 25 year-old Lee Hazlewood had just started working at the local radio station KCKY. 16 year-old Eddy used to visit the studio and became quick friends with Lee. Hazlewood was looking to increasing his earning potential as an aspiring songwriter, while Duane Eddy was playing guitar and singing with a friend named Jimmy Delbridge. In June 1955 Hazlewood, Eddy and Delbridge worked together on their first single, ‘Soda Fountain Girl’/’I Want Some Lovin’ Baby’, using Buddy Long & the Western Boys as back-up band. This country number was Lee Hazelwood’s initial credit as a producer, his original recorded song as a songwriter and Duane Eddy’s earliest recording as an artist.

Having recorded local acts, guitarist Al Casey (with whom Hazlewood would work for most of his career) and Sanford Clarke, during 1956, Hazlewood turned his attentions to Eddy. In November 1957, in Phoenix, Hazlewood recorded the instrumental ‘Movin’ N’ Groovin’’ with Duane Eddy And The Rebels. The track was shaped by Eddy playing around with the tremolo bar on his guitar, producing a twanging sound that would soon launch Hazlewood’s and Eddy’s careers. “I loved Eddy Duchin – the piano player who played the melody way down low on the piano, “Hazlewood would recall in 2002.” And I wanted to know why they didn’t do that on guitar more because they didn’t. So I asked Duane to do that, and he did that, and we made it, you know, that kind of guitar playing. And he was the best at playing that.” The trademark Duane Eddy / Hazlewood twang sound was completed for their next single, ‘‘Rebel- ‘Rouser’, with recording conducted within a cast-iron grain tank located in the car park of Ramsey Recordings.

Hazlewood’s most successful instrumental act is well represented here, with three key Duane Eddy tracks; the snazzy ‘Shazam!’ complete with rebel yells and Jim Horn’s sax, ‘Stalkin’’, the superbly menacing Link Wray inspired flipside to ‘Rebel- ‘Rouser’, and a deeply cool twanging 1967 version of Frank Sinatra’s rendition of Hazlewood’s bittersweet ‘This Town’. Hazlewood’s other stalwart Al Casey rocks up a storm on the 1959 number ‘The Stinger’ and the 1963 pun rocker ‘Surfs You Right’.

Other vital Hazlewood productions include the stirring ‘Challenger II’ and ‘The Phantom Driver’ by drummer Hal Blaine & The Young Cougars (complete with roaring dragster car sound effects), Tony Castle & The Raiders homage to Duane Eddy, ‘Salty’, and the rollicking ‘Desi’s Drums’ by Dino, Desi & Billy, a beat combo comprising the teen progeny of show business royalty – Dino Martin, son of Dean, Desi, the offspring of Dezi Arnaz and Lucille Ball and their lucky Beverly Hills school pal, Billy Hinsche. Hazlewood mostly kept the boy’s role in the studio to the vocals, while Wreaking Crew session musicians played the instruments, but on this occasion Desi Arnaz is actually emphatically thumping the skins.

Even when Hazlewood isn’t occupying the producer’s chair, the sheer quality of his instrumental numbers shine through. Of particular note on Shazam! is the instrumental famed group The Ventures’ rendition of ‘Rebel-‘Rouser’, The Afro-Blues Quintet’s 1968 cool lounge / jazz version of Hazlewood and Nancy Sinatra’s opiate dreamscape ‘Some Velvet Morning’, The Astronauts driving cover of ‘The Hearse’, legendary producer Jack Nitzsche’s south of the border excursion ‘Zapata’ and surf guitar legend Dick Dale & His De-Tones explosive, 1965 live reading of ‘Angry Generation’ at the Hollywood club Ciro’s.

Lee Hazlewood continues to exert a strong influence upon all manner of pop culture. Shazam! provides amble proof that The Twang is still The Thang.

Pick up a copy of the Shazam! CD from Ace Records website. 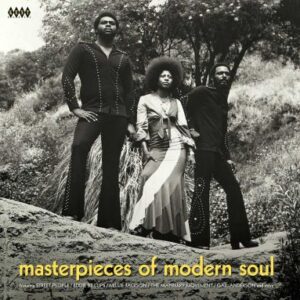 Compiled and noted by Ady Croasdell, this is a very handy, 12 track vinyl compilation of tracks taken from Kent / Ace’s celebrated CD series of the same name. Highly convenient for DJs (most of these tracks were never even issued in the original vinyl era), this collection feature’s tunes of various speeds so it qualifies for prime time home listening too.

Other highlights include Gail Anderson’s 1981 blues flavoured funk ‘Just A Little Ugly’, the magnificent BGP / Ace rediscovery Darondo with an edited version of his free grooving classic ‘Do You Really Love Me’ and the legendary Millie Jackson’s intoxicating and raunchy blend of gospel and southern soul, ‘If That Don’t Turn You On’. The albums glamorous cover stars Natural Resources deliver a euphoric dance tune, ‘If There Were No You’, that remarkably languished within the Dore label vaults until 2014.

At last, these tracks can be listened to as nature intended – on record.

Pick up a copy of the Masterpieces Of Modern Soul vinyl from Ace Records website. 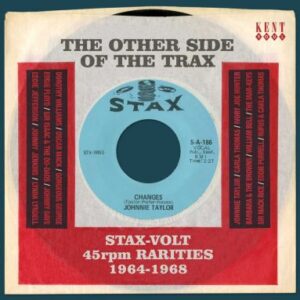 Compiled and noted by Tony Rounce, The Other Side Of The Trax presents 24 fantastic Stax and Volt label B-sides that have never been officially issued on CD before. Not only is it remarkable that these numbers by name artists, such as Eddie Floyd, Carla Thomas, The Mar-Keys and Rufus Thomas, have not been released on compact disc until now, but that they were originally considered B-sides.

Bookended by astonishing tracks by Stax star Johnnie Taylor (Stax songwriters Isaac Hayes and David Porter’s co-write with Taylor, the 1966 Northern Soul classic ‘Changes’ – the only stereo mix on the CD – and the steady groove of ‘Strange Things (Happenin’ In My Heart)’), The Other Side Of The Trax constantly delivers the best of the label’s first golden era of soul.

From Lynda Lyndell’s 1968 dancefloor filler ‘Here I Am’ (the last act to be signed to Stax during the Atlantic distribution years), R&B veteran Ivory Joe Hunter’s bongo powered, 1964 dancer ‘This Kind Of Woman’, Rufus Thomas’ mean and vengeful stomper ‘Sho’ Gonna Mess Him Up’, Eddie Floyd’s joyous ‘Hey Now’ and Sir Isaac And The Do-Dads lively instrumental ‘The Big Dipper’ (the Volt single that started Isaac Hayes’ breathtaking career at Stax), the impeccable quality of these wonderful B-sides never waivers.

Pick up a copy of The Other Side Of The Trax CD from Ace Records website.

Various Artists – Out Of Left Field – Where Soul Meets Country 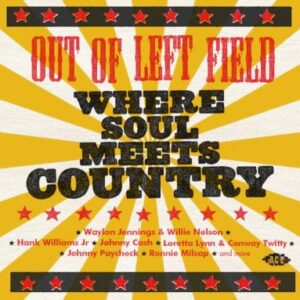 Despite what the Nashville establishment might have wanted people to believe, soul has always coursed through the veins of country music and vice versa. For the last few years Ace has produced three great Where Soul Meets Country discs containing various R&B soul artists performing covers of numbers originally recorded by country acts. On Out Of Left Field, compiled and noted by Tony Rounce, the focus is upon country performers tackling songs by soul acts. That so many of the numbers work so well in the hands of country acts should really come as no surprise. Many of the R&B artists who wrote the compositions grew up listening to country radio stations, while some country artists featured here played on soul sessions.

Among the many highlights here are the infamous Johnny ‘Take This Job And Shove It’ Paycheck’s impassioned 1971 rendition of Jerry ‘Swamp Dogg’ Williams and Gary US Bonds’ hit for Freddie North, ‘She’s All I Got’, country legends Waylon Jennings and Willie Nelson’s astonishing reading of Otis Redding’s ‘(Sittin’ On) The Dock Of The Bay’, former jailbird Freddy Fender’s sensitive 1976 version of Barbara Lynn’s 1962 hit ‘You’ll Lose A Good Thing’ and fearsome country Outlaw David Allan Coe’s surprisingly tender version of Jerry Butler’s 1961 smash, ‘He Will Break Your Heart’.
Perhaps best of all is Johnny Cash’s grand 1975 version of Joe Tex’s narrative song of hope finally fulfilled, ‘Look At Them Beans (Papa’s Dream)’.

This Where Soul Meets Country series just keeps getting better and better.

Pick up a copy of Soul Meets Country on CD from Ace Records website. 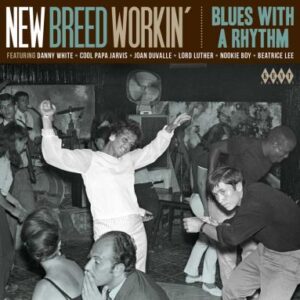 Compiled and noted by Ady Croasdell, New Breed Workin’: Blues With A Rhythm is another vital Kent / Ace compilation of rare ‘New Breed’ R&B and danceable soulful blues numbers that fills the dance floors of numerous ‘retro’ clubs across the UK. Unbelievably, half the songs on this excellent 24 track CD have never been issued before, having laid dormant in various record company vaults for decades, with most tracks drawn from the early 60s with a handful from the mid-50s. What unites this package is an irrepressible cool groove.

The AFO New Orleans label produces such treasures as Robbie Lee’s swinging ‘Let Me Know’, Oliver Morgan’s startling 1962 recording debut under the memorable pseudonym Nookie Boy ‘I’ve Got A Feeling For You Baby’ and the previously unreleased ‘Lucky Girl’ by Joan DuValle. The Los Angeles Dore label presents the rocking ‘Bossman’, RPM offers the legendary Richard Berry’s 1955 rolling ‘Big John’, while on the other side of the country the New York Arock/Sylvia stable tenders the storming ‘Cruel World’ by the mysterious Roosevelt Powers and the foot stomping ‘Steamboat’ by the completely unknown “Arthur Grant & The Red Shoes”.

Pick up a copy of New Breed Workin’: Blues With A Rhythm on CD from Ace Records website.

Ace Records can be found online at acerecords.co.uk, as well as on Facebook and twitter, as @AceRecordsLtd.