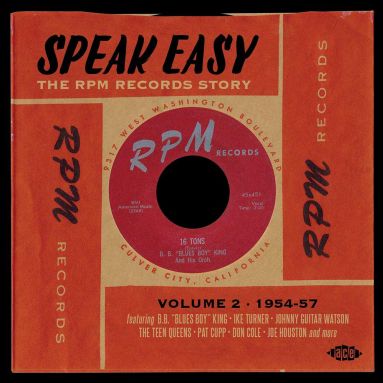 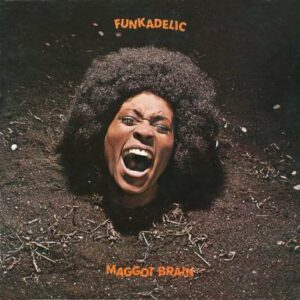 A suitably lavish, high quality Ace Records reissue, in a hard gatefold sleeve, replicating in the finest detail the original US Westbound Records LP, on appropriate fudge coloured vinyl, for one of the seminal recordings of the 1970s – Funkadelic’s Maggot Brain. Like their fellow Detroit band The Stooges’ 1970 masterwork Fun House, Funkadelic’s 1971 groundbreaking channelling of whacked out rock, celestial soul, fractured doo wop, twisted pop, hard funk and general bad craziness, was overlooked for many years. Today, Maggot Brain is justly regarded as a masterpiece and a lasting testament to the madcap intelligence of their inspired, enduring leader and producer, Mr. George Clinton, and the Promethean talents of their gifted late, great guitarist, Eddie Hazel.

Funkadelic’s previous albums, the bold, eponymous 1969 debut and the remarkable 1970 follow-up Free Your Mind… and Your Ass Will Follow, were equally dazzling, but Maggot Brain was something else entirely, as well as being the last album created by the original line-up. Clinton and company took from encouragement from white Detroit rock bands MC5 and The Stooges together with James Brown, Duke Ellington, Sly and The Family Stone, Jimi Hendrix, all manner of doo-wop groups and the general spirit of political insurrection of the period, creating an intoxicating melding of funk with rock. Many since have drawn inspiration from Maggot Brain, from The Happy Mondays to Redman (just check out the sleeve homage of the hip hop artist’s 1994 album, Dare Iz A Darkside), but none has come close to encapsulating its fever dream intensity, sonic diversity and unstoppable groove.

Many cite the opening 10-minute instrumental title track as the album’s key moment. Clinton originated Eddie Hazel’s dazzling solo guitar improvisation, which rivals any of Hendrix’s guitar statements. Most know the story of how the crazed bandleader initially told the tripping Hazel to play as if his mother had just died. Midway through his solo, Clinton informed the guitarist that she was still alive. However, there is far more to Maggot Brain than this admittedly impressive track.

‘Can You Get To That’ is perfect pop with series intent and heavy echoes of Clinton’s doo-wop music past with The Parliaments. ‘Hit It And Quit It’ is funky as hell pop with a killer organ solo by Bernie Worrell and shades of gospel that inexorably rolls towards a fiery, no-holds-barred guitar solo from Hazel. A couple of finger clicks are very audible in the mix, strategically placed there by Clinton to jolt the listener into a new state of consciousness. Snap, you’ve changed, that’s magic. The strident ‘You And Your Folks, Me And My Folks’ appears to call for unity among the races, while the full on rock attack of ‘Super Stupid’, sung by Eddie Hazel, rivals The Stooges and Mc5 at the top of their game, with Hazel shining out once again in a series of explosive guitar salvos.

‘Back In Our Minds’ is high weirdness soul that appeals for some form of togetherness, either personal or universal, while the epic ten minute ‘Wars of Armageddon’ is arguably the highpoint of the album. One unstoppable funky groove, with cowbell and all manner of sound effects echoed to the max, the track appositely reflects the insanity of contemporary society leaping headlong towards destruction. Reflections of the madness of the Vietnam War and the Cold War, a rejection of America’s high consumerist culture, and the student and ghetto revolt are all-evident within its insistent grooves.

It’s not every day that you can buy a new, pristine vinyl copy of a solid gold classic. Maggot Brain is simultaneously totally of its time yet somehow timeless, up there with any album you care to mention. 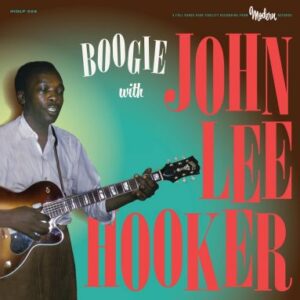 Ace is really spoiling record collectors this month. Someone at the company had the brilliant idea of issuing a vinyl only compilation of the late, great John Lee Hooker’s groundbreaking ‘boogie’ recordings leased or cut for Joe Bihari’s Modern Records. Recorded over a period from 1948 until 1954, these primal, dynamic, propulsive cuts, aimed firmly at the dance floor, formed the foundation of Hooker’s glorious career.

Mostly recorded with just Hooker’s grooving electric guitar, his trusty stomping board and occasionally Eddie Kirkland’s guitar for company, these stripped down, dance compositions had a similar impact upon the R&B music of the era as punk did upon rock in the 70s.

Side Two kicks off with the fervent ‘Jump Me (One More Time)’. Featuring a loud, urgent Hooker guitar solo, a future shock raw power eruption that threatens to combust the speakers. It is hard to believe that ‘Jump Me (One More Time)’ was first issued in 1954. ’21 Boogie’ declares Hooker’s independence, ‘Huckle Up Baby’ cuts a rug and ‘Momma Poppa Boogie’ establishes his heritage in unstoppable fashion. The minimal ‘Boogie Chillen’ still sounds as revolutionary and danceable as it did in 1948; the 1955 cut ‘Shake Holler And Run’ (one of the few tracks with a band backing up Hooker) are a danceable riot, while ‘Too Much Boogie’ is a menacing, hypnotic groove, warning of the dangers of excessive boogie-woogie action. ‘Too Much Boogie’ really could have been recorded by Suicide.

All topped off with fantastic period style sleeve art, Boogie with John Lee Hooker is a record to treasure, guaranteed to instigate wild, uninhibited dancing wherever it’s played. Hooker’s boogie is still the heartbeat of the hip. 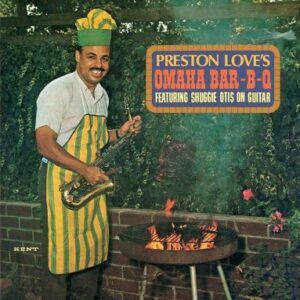 Preston Love was no Johnny come lately. Hailing from Omaha, Nebraska, he had established himself playing with Count Basie and Fats Waller before forming his own combo backing Billie Holiday and working with original R&B wildman Wynonie Harris and Johnny Otis. Having backed up Ray Charles in the 1960s, with the jazz/big band era was fading by 69, Love team up again with his old friend Otis. The results are spectacular.

Today in the UK, an original US LP copy of Preston Love’s Omaha Bar-B-Q Featuring Shuggie Otis On Guitar would cost over £60 quid. You know what to do. Hopefully, Ace will soon reissue Love’s ridiculously rare single, on the Hudson label, from this period, ‘Cissy Popcorn’. 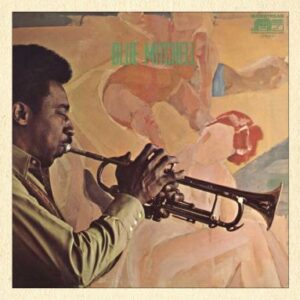 A highly welcome reissue of trumpeter Blue Mitchell’s eponymous 1971 debut album for the Mainstream label. A mighty fine addition to Ace’s Boplicity series, hopefully it will raise the somewhat forgotten Mitchell’s profile, which has unfairly waned somewhat since his early death in 1979.

Born in Miami during 1930, Mitchell career as a trumpeter was not exclusively within the jazz world, spending much time with blues and R&B groups Paul ‘Hucklebuck’ Williams and Earl Bostic, before becoming a featured soloist with Ray Charles and Lena Horne. From 1958 until 1964, Blue Mitchell was a key member of pianist Horace Silver’s Quintet, featured on a number of Blue Note albums, before inheriting Silver’s band and recording his own albums (eight in total, including Down With It!, which features a barnstorming cover of Tommy Tucker’s ‘Hi Heel Sneakers’) for the label for the rest of the 60s. Though perhaps not as daring as other artists of the period, Blue Mitchell’s Blue Note albums, some of which feature future Miles Davis drummer Al Foster and pianist Chick Corea, are all highly entertaining and soulful.

The Mainstream album opener, Blue Mitchell’s composition ‘Soul Village’, is a classic. Mixing hypnotic blues and soul into an extended, potent groove ‘Soul Village’ is a more danceable version of the music Miles Davis was producing during the late 1960s. Walter Bishop Jr’s grooving electric piano sets the scene, propelled by Doug Sides’ drums and Larry Gales’ bass, leaving Mitchell and his tenor saxophonist Jimmy Forrest room to proffer inspired and free solos. The track clocks in at 6 minutes but it could continue for another 10.

‘Blues For Thelma’, named after Mitchell’s wife, is hard bop par excellence, recalling Silver’s group and Art Blakey and the Jazz Messengers. ‘Queen Bey’ carries a buoyant Caribbean vibe, while Mitchell’s version of Benny Golson’s ‘Are You Real’ and his own number, ‘Mi Hermano, are driven with a fresh Latin bossa nova beat and Bishop Jr’s keyboards.

Mitchell recorded another six albums for Mainstream. With any luck, the best titles will be reissued on Ace’s Boplicity. 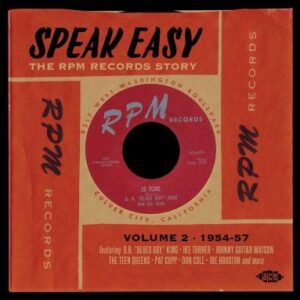 Another double Ace CD of unparalleled magnificence, featuring many previously unissued performances, compiled and noted by Tony Rounce. Last year, Rounce created a remarkable compilation charting the brief but glorious existence of the Bihari brothers West Coast Modern Records’ subsidiary. Flair. Earlier this year, Rounce turned the spotlight upon another equally illustrious Bihari Modern Records offshoot label, RPM, with No More Doggin’ The RPM Records Story Vol 1 1950-1953. Now Rounce winds up the saga with Speak Easy – The RPM Records Story Vol 2 1954-1957, featuring 54 tracks, 33 of which have never been issued on an Ace CD. The other 21 tracks have been mastered from new transfers from the original master tapes. The net result is outstanding quality listening.

B.B. King is the only artist featured on the previous No More Doggin’ that would still be associated with RPM after 1953. RPM’s biggest star, where he arguably recorded his finest work, is well represented here. King’s ‘Don’t You Want A Man Like Me’ draws upon Latin rhythms, while ‘You Upset Me Baby’ carries a swagger unlike any other performer and makes Memphis Slim’s ‘Every Day I Have The Blues’ and Merle Travis’ country tale of woe of the working man,’16 Tons’, his own. Convulsing with ideas, all B.B. King’s tracks, from the back alley blues of Gatemouth Moore’s ‘Did You Ever Love A Woman’ to the frantic rock ‘n’ roll jive ‘Bim Bam’ capture all the changes that happened in 1950s blues – the intense vocals, severe guitar lines, horn-laden band sounds with wailing saxophone and trumpet sorties, the improvisatory ideas borrowed from jazz.

Other RPM acts offer quality doo wop (‘A Casual Look’ by Little Clydie & The Teens, featuring Richard Berry, and The Jacks, who also recorded ‘Stranded In The Jungle’ as The Cadets, sing the impassioned ‘Why Don’t You Write Me?’), raucous R&B drinking songs (‘I Ain’t Drunk’ by Lonnie “The Cat” and ‘Pass The Gin’ by The Meadowlarks), bizarre, unhinged novelty records (The Fox’s ‘The Dream Pts 1& 2’) and even a smattering of post Elvis white rock ‘n’ roll (Pat Cupp & The Flying Saucers’ ‘Do Me No Wrong’ and the Jerry Lee Lewis fixated Don Cole singing Lee Hazlewood’s ‘Snake Eyed Mama’).

And that’s just scratching the surface of the treasures that lie within Speak Easy – The RPM Records Story Vol 2 1954-1957. It’s compilation CDs of this quality that made Ace the label that it is today.