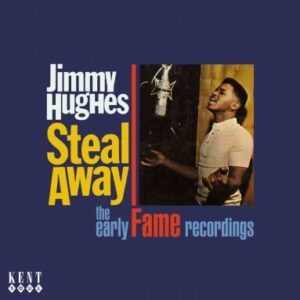 A very welcome addition to Ace’s ever expending catalogue of vinyl album releases, this reissue marks the 50th anniversary of the release of the very first Fame Records long player – the debut LP by Jimmy Hughes, the Muscle Shoals Alabama label’s first star.

Recorded at the label’s studios on Avalon Avenue, Steal Away is a rare collector’s item, due to the fact that its chart success was hampered by the financial collapse of Fame’s distributors, Vee-Jay. Most copies that still exist are much loved, making this vinyl re-release of Steal Away, on funky blue vinyl, a real cause for celebration.

The title track, a beautiful slice of southern soul, in part inspired by gospel number ‘Steal Away To Jesus’, delivered Hughes the biggest commercial success of his career, bringing the Fame sound to America’s attention with a Top 20 chart placing. The rest of the album, produced by Fame founder Rick Hall, and featuring keyboardist and future Neil Young producer David Briggs, includes Hughes’ excellent follow-up singles ‘Try Me’ (written by James Brown, who also had a hit with the song)/’Lovely Ladies’ (a propulsive upbeat groove written by Fame’s premier songwriter Dan Penn and Rick Hall), an early version of the classic bass propelled single ‘Neighbor, Neighbor’ and the ballad ‘I’m Getting Better’/’I Want Justice’ (another Penn dancefloor filler).

The rest of the tracks, which were not issued as singles, such as Hughes poignant reading of the blues standard ‘Stormy Monday Blues’ and the jubilant ‘Everybody Let’s Dance’, are of the same high standard. In short, this edition of Steal Away is a record to treasure. 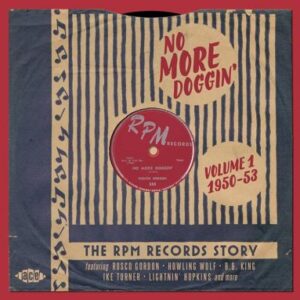 The RPM label gave an enormous impetus to the careers of such legendary R&B/blues figures as the volcanic Howling Wolf, Rosco Gordon, B.B. King and a host of other stellar talents. The RPM saga cannot be contained within a double disc set, so this volume ends at the near half way point of the labels existence, This is helpful to the compiler, as B.B. King is the only artist featured on No More Doggin’ that would still be associated with RPM after 1953.

B.B. King’s place as one of the founding fathers of modern blues, and therefore rock guitar playing, is set in stone. B.B. King would also be the cornerstone of the Bihari brothers RPM, where he arguably recorded his finest work.

Riley B. King was born on September 16, 1925, on a cotton plantation in Itta Bene, Mississippi.  B.B.’s first big break came in 1948 when he performed on Sonny Boy Williamson’s radio program on KWEM broadcast from West Memphis.  Riley B. King needed a catchy radio name.  What started out as Beale Street Blues Boy was shortened to Blues Boy King, and eventually B.B. King.

Soon after his 1951 breakthrough number one RPM hit, ‘Three O’Clock Blues’ (featured on this CD with Ike Turner on piano), B.B. began touring nationally, and he has never stopped, performing an average of 275 concerts a year. ‘B.B. Boogie’,  ‘The Other Night Blues’, ‘Woke Up This Morning’, ‘Fine Lookin’ Woman’, ‘Please Love Me’, the jumpin’ ‘Shake It Up And Go’ and the explosive ‘She’s Dynamite’ are all perennial B.B. King classics. Convulsing with ideas, these tracks capture all the changes that happened in 1950s blues- the intense vocals, severe guitar lines, horn-laden band sounds with wailing saxophone and trumpet sorties, the improvisatory ideas borrowed from jazz.

Combined with electrifying recordings by the mighty Howlin’ Wolf (the unstoppable ‘Riding In The Moonlight’ and the powerful ‘I Want Your Picture’, Rosco Gordon (the fevered ‘New Orleans Wimmen’, the intoxicating ‘We’re All Loaded’ and the raucous ‘Booted’: both Wolf and Gordon were brought to RPM by Sam Phillips), the haunting blues of Lightnin’ Hopkins (‘Last Affair’, ‘Another Fool In Town’) and RPM talent scout Ike Turner’s discoveries, such as bluesmen Sunny Blair (‘Glad To Be Back Home’) and Houston Boines (‘Superintendent Blues’), makes No More Doggin’ The RPM Records Story Vol 1 1950-1953 a very special collection indeed. Roll on Volume 2. 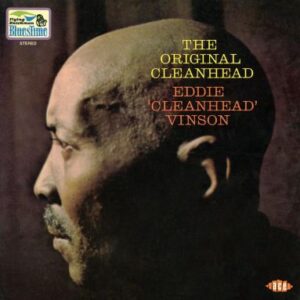 When Bob Thiele, the visionary former head of the jazz label Impulse, formed his own Flying Dutchman label in 1969, he also started the BluesTime imprint to build upon the 60s blues explosion. Along with ‘Big’ Joe Turner and T-Bone Walker (featured on another Ace/ BluesTime CD reissue this month, the excellent Super Black Blues), singer/alto saxophonist Eddie ‘Cleanhead’ Vinson was one of the first artists Thiele signed.

Born in Houston, Texas in 1917, Vinson was a key figure in black American post war music, bridging the eras of swing, bebop into the R&B era. Vinson had toured with Big Bill Broonzy in the late 30s, learning more about the blues, but he was always receptive to new sounds in black music, embracing both the improvisation of figures such as Charlie Parker and Eddie ‘Lockjaw’ Davis and roughhouse jump blues. Yet by the mid-1960s Eddie ‘Cleanhead’ Vinson was semi retired and viewed as a figure of the past, despite recording with jazz giant Julian ‘Cannonball’ Adderley in the early 60s, until Thiele interceded.

Unlike other BluesTime acts, Eddie ‘Cleanhead’ Vinson’s music would not withstand any modernisation: it just required sympathetic execution, which he received from the crack session band that producer Thiele assembled in Los Angeles for The Original Cleanhead sessions.  ‘Cleanhead Blues’, the opening number of the album, issued in 1970, is a spirited revival of a song that he first recorded for the Mercury label in 1946, while the politically incorrect blues groove ‘Alimony Blues’ and the amusing ‘Old Maid Blues’ are of a similar vintage but equally vital, while guitarist Joe Pass’ slinky instrumental ‘Pass Out’ gives a great platform for Vinson’s remarkable saxophone solo. 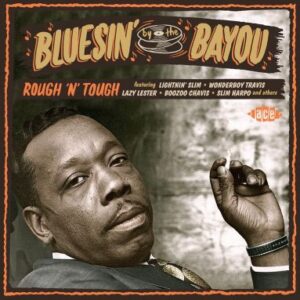 The follow-up to last year’s superb classic compilation Bluesin’ By The Bayou, Rough ‘N’ Tough is an equally magnificent collection focusing upon blues musicians from South Louisiana and South East Texas, discovered and recorded between the late 50s/early 60s by J.D Miller and Eddie Shuler in their Crowley and Lake Charles studios. Once again masterfully compiled and noted by Louisiana popular music expert Ian Saddler, Bluesin’ By The Bayou Rough ‘N’ Tough (the eighth CD in the Bayou/ J.D Miller series, overall) captures the raw form of South Louisiana blues, with a dash of Zydeco thrown in for good measure, performed by some of its greatest practitioners at the top of their game.

Unbelievably, 17 of the 28 tracks included here are previously unissued or alternate cuts. Blues legends Lightnin’ Slim & Lazy Lester (a pivotal part of J.D Miller’s recording unit) open the CD with the astonishing ‘Trip To Chicago’, a true story of an eventful coach ride to the Windy City to play a concert, which is previously unissued.  Harmonic player/guitarist/vocalist Lazy Lester also delivers the dynamic ‘Whoa Now’ and the hypnotic ‘Sugar Coated Love’, while guitarist/vocalist Lightnin’ Slim demonstrates why is he is often rated as one of the top five bluesmen of the 1950s with the shaking ‘Tired Of Waiting Baby’ and an alternative take of the agitated ‘Tired Little Fellow’.

Swamp blues king harmonica player/vocalist Slim Harpo, beloved by The Rolling Stones, makes his unmistakable presence felt with the resigned  ‘Bought A Ticket’ and a jumpin’ unreleased version of ‘My Little Queen Bee’, as well as having his cool portrait adoring the sleeve of the CD. Other gems include Jimmy Anderson’s spectral ‘I Wanna Boogie’, Boozoo Chavis’ spooked Zydeco influenced ‘Got A Brand New Mojo Hand’ and Joe Mayfield’s haunting ‘You’re The One I Love’.

If you are looking for top draw, primeval blues, look no further than Bluesin’ By The Bayou Rough ‘N’ Tough. 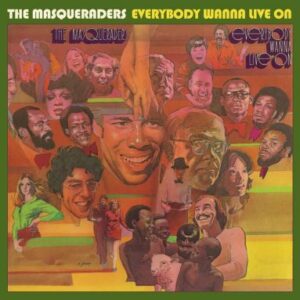 The Masqueraders – Everybody Wanna Live On

The first CD issue of the soul vocal harmony group The Masqueraders’ 1975 album, produced and arranged by the herculean talent that was Isaac Hayes, featuring his band The Movement (with Hayes on keyboards) and The Memphis Symphony Orchestra, is cause for celebration. Originally issued on Hayes’ Hot Buttered Soul label, the album has been unavailable for many years and deserves recognition.

As Tony Rounce reveals in the notes for this CD, The Masqueraders, who hailed from Dallas but recorded in Memphis, had enjoyed some success since their first single in 1963, a cover of Gene Chancer’s ‘Man’s Temptation’, but their involvement with the superstar Hayes elevated the vocal group to another level.  The album, mostly composed by The Masqueraders, is very much in the luxuriantly arranged and richly orchestrated style of Hayes’ own recordings for the recently collapsed Stax label that had made his name internationally.

The album opens in style with the jubilant, eight-minute funky groove that is the title track. Perhaps if this composition had been issued as a 12 inch single, Everybody Wanna Live On would have reached a wider audience.  ‘Everybody Wanna Live On’, the impassioned ‘Listen’ and the joyous ‘Sweet Sweetening’ are really the most up-tempo tracks on the album, while the rest of the tracks foreground the incredible harmonious of The Masqueraders and their mastery of the ballad.  The loosely funky ‘Please Don’t Try (To Take Me Away To The Sky)’ would not have been out of place on Funkadelic’s Maggot Brain, while the group’s and Hayes’ rendition of The Shirelles/Bacharach/David number ‘Baby It’s You’ utter transforms the song into a slow, downtown soulsville configuration.