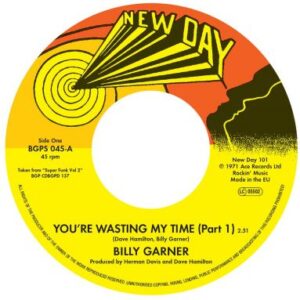 It’s been a few years since Ace issued an assortment of BGP singles, so these fantastic 45 reissues are particularly welcome. Whether for home listening or playing out, these tracks are essential.

Little Eva’s (Eva Boyd) success began when she was babysitting for songwriters Gerry Goffin and Carole King. The couple recorded Eva performing their song ‘The Loco-Motion’ in 1962, released it on the Dimension label and scored a massive hit across the globe. Regrettably, a follow-up hit could not be found. In 1965 producers Bob Feldman, Jerry Goldstein and Richard Gottehrer, who had written and produced The Angels’ ‘My Boyfriend’s Back’, thought they had the solution – an answer record to James Brown’s hit ‘Papa’s Got A Brand New Bag’, ‘Dynamite’. Unbelievably not released at the time (though covered by Jimmy Jones, The Sheep and The McCoys), ‘Dynamite’ really lives up to the title and is still guaranteed to get feet moving on any dancefloor. The B-side, Little Eva’s ‘Get Ready- Uptight’ medley, is equally dynamic.

The late, great Gil Scott-Heron’s ‘When You Are Who You Are’ is simply stunning and taken from his classic 1971 Pieces Of A Man LP, issued for the first time as a single. The B-side is a cool alternative version of the driving title track from Heron’s last album for the Flying Dutchman album, Free Will. The 1972 reworking of the old hits ‘Love Potion Number 9’ and ‘Cool Jerk’ by The Coasters is a revelation. Decades after they were first released, these numbers were overdubbed in NYC under the direction of Marty Sheller with the celebrated Larry Harlow Orchestra, one of the premier Latin music outfits of the day. The result is pure boogaloo heaven.

The only question that remains is can you handle this much funk? Of course you can. Ace should be heartily commended for keeping this music alive on vinyl. 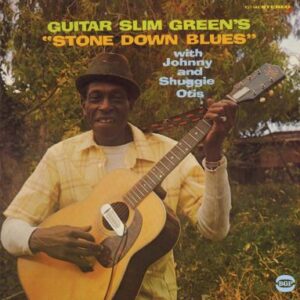 A rare and magnificent 1970 album by the little known bluesman Slim Green, now available again on CD, thanks to Ace. Recorded with the late, great, West Coast singer / songwriter / arranger / producer / author / talent scout Johnny Otis, featuring his then 16-year-old son Shuggie on bass and electric guitar, Stone Down Blues is a superb 70s blues album from start to finish.

Slim Green had been cutting records in LA since 1948 and had recorded two singles (including the amazing ‘Old Folks Boogie’) for Johnny Otis’ Dig label, as one of The Cats From Fresno, in the late 50s. For what would prove to be Slim Green’s last album, Johnny Otis played drums throughout a selection of compositions written by the trio. The first track ‘Shake ‘em Up’ is a stone cold funky blues classic. Utterly hypnotic and guaranteed to make the dead dance, Shuggie’s adventurous eclectic lead guitar licks push the track ever forward yet allow space for Green’s laidback vocals to urge the intended female audience to ‘Shake ‘em Up’.

The remainder of the album consists of more somewhat conventional but fine blues (‘Make Love All Night’, ‘Bumble Bee Blues’) with some reworking of Guitar Slim’s earlier work, including ‘Old Folks Boogie’, now titled ‘Old Folks Blues’. Yet there is room for a moving and heartfelt anti-Vietnam War song, ‘This War Ain’t Right’. Written by Johnny Otis, ‘This War Ain’t Right’ highlights Slim Green’s incredibly poignant voice, adding to the general conviction of this haunting number.

Featuring two previous unreleased tracks (‘My Marie’ and ‘Rock The Nation’), Stone Down Blues is a fitting epitaph for Guitar Slim Green, who died in LA during 1975. Hopefully his work will become more widely appreciated with this release. 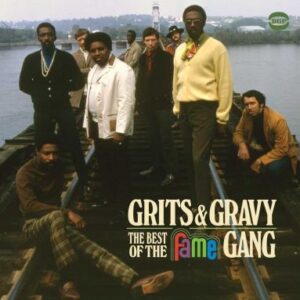 Prudently compiled, researched and noted by Alec Palao, this is a terrific compilation of the funky instrumental numbers (most previously unreleased) produced by one of the greatest studio house bands of the 60s/early 70s – The Fame Gang. Though perhaps not as well known as Motown’s Funk Brothers, Phil Spector’s Wreaking Crew or Stax’s team, The Fame Gang, operating from Fane Studios, 603 East Avalon Avenue, Muscle Shoals, Alabama, were definitely among the elite musicians of the era. Producer/engineer Rick Hall drew three different sets of top players to form the Fame Gang, a band, in its third incarnation, that was crucially three-quarters black during a period of great racial ‘unrest’ in the South.

The title track, ‘Grits And Gravy’, an extended version of the original release, is wonderful; a restless slice of propulsive funk and jazzy cool attitude. The formula for ‘Grits and Gravy’ – Meters style groove, similar horn arrangements to the JBs, Booker-T & The M.G.’s ambience – is worked through the 25 tracks on this compilation.

On certain compositions, such as ‘Twangin’ My Thang’ and ‘Cannonball’, The Fame Gang come very close to the Funkadelic rock/funk melting pot that George Clinton was concocting around the same period. The Fame Gang’s selection of contemporary covers – Sly Stone’s ‘Stand’, Tim Rose’s ‘Hey Joe’, The Isley Brothers’ ‘It’s Your Thing’ and Herbie Hancock’s ‘Cantaloupe Island’ – also rock the house in a funky, danceable manner. 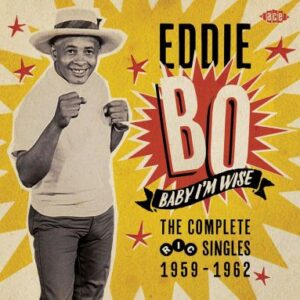 Local New Orleans legend Eddie Bo only really received international recognition during the late 90s, when his funky late 60s and 70s singles (such as ‘Hook And Sling –Part 1 and 2’ on Scram Records and ‘Check Your Bucket’) were picked up on by deep funk aficionados. Yet the 22 master cuts on this disc, compiled and noted by Tony Rounce, recorded by the singer/song writer/pianist for Joe Ruffino’s New Orleans Ric label between 1959 and 1962, are undoubtedly among Eddie Bo’s best work during six decades of recording.

Baby I’m Wise exhibits Eddie Bo’s talents as an R&B music master, firmly rooted in the great musical traditions of the Crescent City. It remains a mystery why these nine A and B-side singles (together with four numbers that weren’t issued in the 60s) didn’t cross over to a national and international audience. The buoyant ‘Tell It Like It Is’, the hard times anthem ‘Every Dog Has His Day’, the blues flavoured slow dance stroll of ‘You Got Your Mojo Working Now’ and the effortless charm of ‘Warm Daddy’ are just some of the tracks that illustrate that Bo was the match of any R&B performer of the era.

The indefatigable Eddie Bo was performing and playing music right up until his death in 2009. Check out some of his greatest work right here. 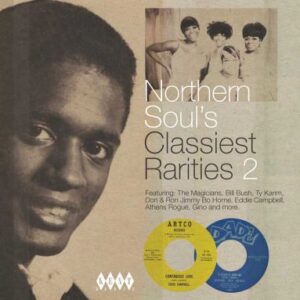 Compiled and noted by Ady Croasdell, Ace/Kent’s 5th offering of Northern Soul’s Classiest Rarities contains to maintain the high standard of the series. This heady mixture of previously unissued tracks, rare gems and highly sort after collector’s items contains the enduring spirit of the music that fuelled the UK Northern Soul scene in the 70s.

On of the best tracks here is Marva Holiday’s lovelorn ‘Hang Around’. Remarkably, Croasdell includes in the notes an interview with Holiday, who outlines how this wonderful 1968 single was recorded, in the process revealing much about her background and career. Now a face and a back-story are imposed upon a voice and an unforgettable song.

Other highlights are numerous and varied. 15 year-old Mary Saxton channels Tina Turner on ‘Losing Control’, which features repeated car crash sound effects, the bewitching up-tempo funk of The Webb People’s ‘I Sending Vibrations’ is longer than previously released on Ace’s 2011 CD Dave Hamilton’s Detroit Soul, while Music City label act The Ballads’ 1975 number, ‘Butterfly aka I Wish I Knew’, sounds like the dream theme to a lost Blaxploitation picture. Mel Davis’ 1969 sole single, ‘Just Another Smile’, is a pile driving funk boogaloo workout, The Steelers’ 1967 release is vocal harmony soul of the first water and the recently rediscovered Darondo Pulliam’s dynamic 1972 number ‘How I Got Over’ takes his Al Green style vocal to the limit. Once again, Croasdell’s highly informative sleeve notes only heighten the pleasure to be derived from these jubilant prime cuts of black American soul.

This compilation even includes an amazing late period track by the R&B legend Big Joe Turner. Taken from Turner’s 1969 Bluestime LP The Real Boss of the Blues and issued as a single, the romantic soul of ‘Two Loves Have I’ sounds as if it was recorded in Chicago rather than LA. Though Big Joe Turner was certainly not a natural soul singer, but ‘Two Loves Have I’ apparently received many plays on the Northern Soul scene.