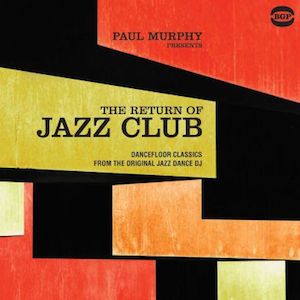 Nice! A fantastic compilation of red-hot dance floor classic jazz tracks, compiled by legendary 80s DJ Paul Murphy from the vaults of the Prestige and Riverside labels. Best of all, this is issued as a glorious double vinyl album as well as on CD.
From the late 70s throughout the 1980s Paul Murphy virtually singlehandedly instigated a renewed interest in jazz with his highly popular DJ sets of hard bop jazz, Latin, Bossa nova and fusion at the Electric Ballroom in Camden and later at the WAG club in Soho and with his Jazz Club compilation albums. Murphy left the scene that he had shaped at the end of the 80s, but has now revisited the music he intuitively understands so well with this collection.

If you can’t dance to this, or at the very least tap your foot, you should really check your pulse. Paul Murphy knows and shows that this music is still as relevant on a dancefloor as when it was recorded. Great. 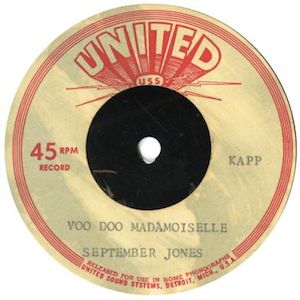 A fantastic 45-RPM single release of a ridiculously rare Northern Soul classic by the legendary Detroit singer September Jones, for which all aficionados of classic 60s soul should be eternally grateful. Infectiously danceable with suitably spooked lyrics, ‘Voo Doo Madamoiselle’ is the quintessence of the euphoric Northern Soul sound.

This gem was rediscovered, or rather discovered since it never had a proper release anyway, due to the wonderful series of YouTube videos, Northern Soul Girl Dancing. These clips featured a young, attractive rare soul fan, Lev, dancing to a succession of obscure soul songs in unusual locations. These videos were filmed by Lev’s mother, Eve, a 1980s 100 Club Northern Soul all-nighter fan who obviously passed on her fine taste in music to her daughter. The videos were soon an Internet sensation. Surprised by the success of their films Eve contacted Ace Records about licensing, to gain long overdue recognition for the artists who made the music. Of the tracks that Ace had licensing control over Lev choose Jones’ ‘Voo Doo Madamoiselle’. An Ace deal was made with original Funk Brother Jack Ashford and his Pied Pieper label partner to release this single, with a fine Freddy Butler number as a B-side to boot (featured on the Kapp album, Freddy Butler With A Dab Of Soul).

This single is worth every penny of the £10 pounds it will cost you and proves that the Internet can be a force for the betterment of mankind. ‘Voo Doo Madamoiselle’ is so magnificent it produces these feelings of conceivably imprudent sanguinity. 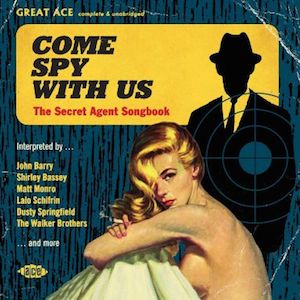 Various Artists – Come Spy With Us.

Compiled and noted by Tony Rounce, Come Spy With Us is the perfect compendium of songs and themes that graced the numerous spy movies and television shows that were screened during The Cold War in the 1960s.

Fittingly, Come Spy With Us kicks off with a composition by the composer who set the template for spy movie music throughout the 1960s, John Barry. Rather than use Barry’s famous arrangement of ‘The James Bond Theme’ (a killer, rare 1963 version by Johnny & The Hurricanes is included instead), Rounce has wisely chosen ‘A Man Alone’, the composer’s eerie and equally iconic theme for the 1965 Michael Caine/Harry Palmer picture, The Ipcress File.

Come Spy With Us covers all bases, from a guitar twanging 1968 version of Henry Mancini’s theme for Arabesque by The Ventures, to an equally guitar dominated rendition of ‘Theme From The Man From U.N.C.L.E’ by The Challengers, by way of Nancy Sinatra’s two fisted reading of Lee Hazlewood’s theme song for the spy spoof movie ‘The Last Of The Secret Agents’ and Dusty Springfield’s simply beautiful version of Burt Bacharach and Hal David’s ‘The Look Of Love’ for the unfortunate 1967 Bond parody picture, Casino Royale.

Yes, all this and a perfect pulp spy paperback book CD cover and an impressive collection of movie posters, album sleeves and vintage novel jackets in the booklet. Carry On Spying. 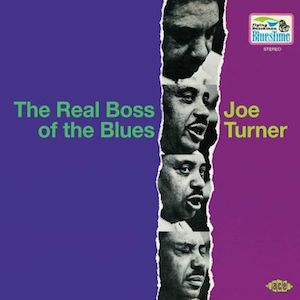 Joe Turner – The Real Boss Of The Blues.

‘Big’ Joe Turner, a giant bear of a man from Kansas City with an unmistakable authoritative, cavernous voice had dominated the rhythm & blues scene since the late 30s. At the age of 40 in 1951, Turner signed with Atlantic Records, becoming a most improbable but highly potent star, as R&B slowly mutated unto what would be termed rock ‘n’ roll. Turner’s R&B hits, such as ‘Shake, Rattle And Roll’, ‘Corrina, Corrina’ and ‘Honey Hush’ sold by the truckload and where covered by numerous white rock ‘n’ rollers. Yet until the late 60’s blues revival, the mighty Turner, though still performing, had faded from view.

When Bob Thiele, the visionary former head of the jazz label Impulse, formed his own Flying Dutchman label in 1969, he also started the Bluestime imprint to build upon the blues explosion. Big Joe Turner was one of the first artists Thiele signed. The resulting album, The Real Boss Of The Blues, is similar in tone to Chess Records attempts to bring Muddy Waters (Electric Mud) and Howlin’ Wolf (The Howlin’ Wolf Album) to a late 60s audience raised on rock. As with the Waters and Wolf albums, the result should fail abysmally but miraculously Turner’s indomitable style survives somewhat funky and jazzy big band arrangements of his hits referred to above and contemporary numbers, such as Len Chandler’s ten minute blues, ‘Plastic Man’.

Augmented with two fascinating live and typically driven performances by Turner of ‘Honey Hush’ and ‘Yakety Yak’ at Carnegie Hall in 1970, this album shows that Turner certainly was The Real Boss of The Blues until his death in 1985. Buy this and any other record with ‘Big’ Joe Turner’s name on it, and while you’re at it read Nick Tosches’ masterful Unsung Heroes Of Rock ‘n’ Roll: The Birth Of Rock In The Wild Years Before Elvis for further info. 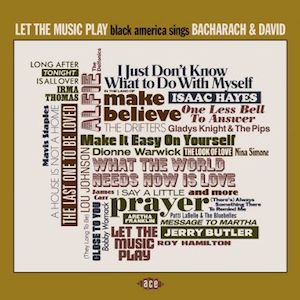 Having already focused upon “Black America” singing the work of Bob Dylan, Lennon & McCartney and Otis Redding, this Ace series now reflects upon how some of the matchless soul performers of the 1960s and 1970s interpreted the work of one of the greatest song writing partnerships in the history of popular music, Burt Bacharach & Hal David. Diligently compiled and noted by Tony Rounce, Let The Muisc Play features 24 of Bacharach & David’s best-known compositions with some of their best renditions of their material yet recorded.

Uniformly excellent from the opening Dionne Warwick number (obviously the supreme interpreter of Bacharach & David’s work), the original demo version of the sublime ‘Make It Easy On Yourself’, to Mavis Staples closing heartrending 1969 version of ‘A House Is Not A Home’ (written for the 1964 film of the same name, a biography of an infamous 1950s madam), Let The Music Play delivers hit after hit.

Together with Isaac Hayes’ soulful 1970 version of ‘I Don’t Know What To Do With Myself’, Bobby Womack’s yearning 1971 reading of ‘(They Long To Be) Close To You’, Nina Simone’s joyful ‘The Look Of Love’, Gloria Gaynor’s 1975 disco version of ‘Walk On By’ and Aretha Franklin’s timeless 1968 performance of ‘I Say A Little Prayer’ (written from the perspective of a girl missing her man, who is fighting in the Vietnam War), Let The Music Play is an amble testament to the genius of Bacharach & David.