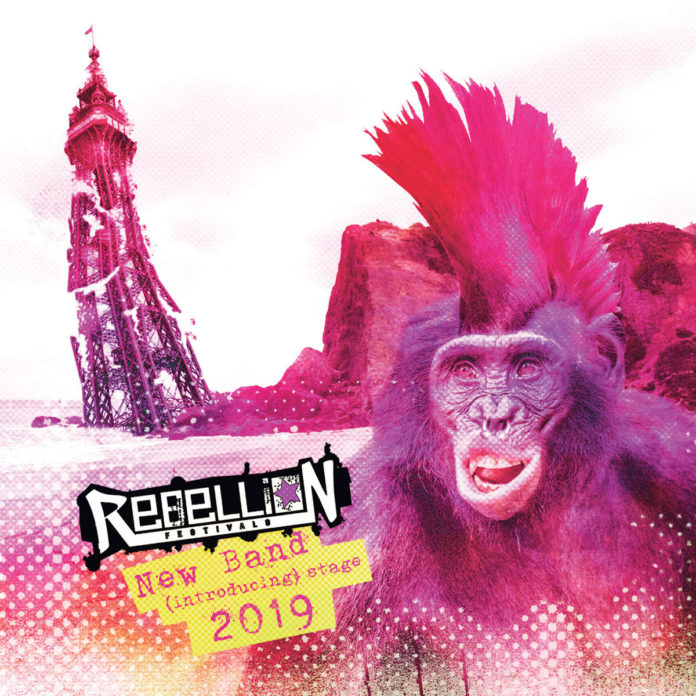 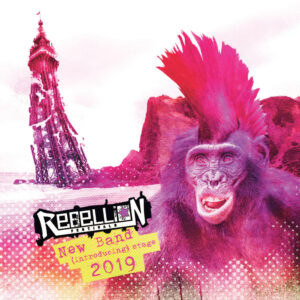 Over a number of years the Rebellion Festival Introducing Stage has developed to now become an integral part of the 4-day event. Once run as an add-on, the dedicated stage has become a driving source for the progression of the festival, many of the bands being invited back for slots on the bigger stages in later years.

Thankfully Blackpool indie label Just Say No To Government Music noticed the development, and in 2017 put out a CD showcasing 29 of the bands appearing on the RIS.

The labels commitment to the stage has deepened; for 2019 they have issued a 2CD album, housed in a lurid coloured gatefold sleeve, each disc capturing 25 studio recordings of the artists appearing between the 1st – 4th August 2019.

Some of the bands are more established than others, bands such as The Outlines have been regulars on the UK circuit for a few years. They open the album with the Clash influenced ‘Heres To You’ a pacey, confident rabble rouser, complete with soaring vocal harmonies that shows huge progression from their ‘Streets Of England’ debut album released back in 2015.

Swiss based Fluffy Machine may well own an appalling name, however their ska tinged adrenaline rush is very welcome, similarly with Brazil’s Abrakadabra who bring some brass, and call and response vocals to the mix; the international mix continues with tracks from Shock who travelled from the Basque region to appear.

Even further from Blackpool is Guadeloupea a French overseas region, an island group in the southern Caribbean Sea , home to The Bolokos, not surprisingly, to date the only punk band to come from the region. They contribute ‘I Don’t Care’ which has a stunning opening riff, gravelled vocals Shane McGowan would be envious of, and some neat keyboards bring colour into an energetic no doubt liquor fuelled riot.

The Spitters hail from France, and with ‘I Can Call The Bomb’ deliver a confident Dolls tinged early punk rush.

Incisions deliver some intense hardcore street punk with ‘War In Your Head’ before we journey back to Brazil for ‘Geracao Yogurte’ a garage rock tinged belter courtesy of Garrafa Vazia. The band having previously released a self titled mini album back in 2016, though I suggest its pretty much unavailable outside their homeland. 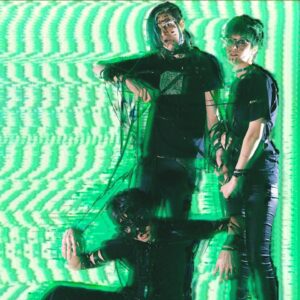 Martyrials are a welcome shock to the senses. ‘Are You Having Fun?’ draws on every conceivable style, from post punk, new wave, elements of psych and drags you through the entire kalidescope of sound before the track closes with 30seconds of industrial squall that made me think I was at a different festival – this is a band well worth further investigation.

Nosebleed have been around for a good few years, during which time they have proved themselves to be one of the most exciting live bands out there, plus in those sharp suits they look pretty natty! ‘Time And Time Again’ is lifted from their 2018 ‘Scratching Circles On The Dancefloor’ album that TNS Records released on white vinyl to match the boys dapper appearance. Its full on garage rage that arcs back to the nascent flames of rock ‘n’ roll whilst at the same time hurtling forward, its as tight as Wah Wahs stage timings and an excellent introduction to the band.

The four piece all female Sour Bitch hail from the Czech Republic and play a heavily influenced US style pop punk; The Backstreet Abortions by comparison are local having only travelled from London, the band was formed with the original 1990 members of Sick On The Bus with Jesse Smith on vocals. They describe their material as “songs about abortion, drugs and domestic violence”, they contribute ‘Texas Heat’ from their 2017 self titled EP, 120 seconds of energetic punk rage.

Lead Shot Hazard included here with ‘Current State Of Play’ had the honour of hitting the first note of the entire 2019 festival, opening up proceedings at a rather refined 11.45hrs, its energetic, driven by some neat drum and bass work, but is not really pushing any genre boundaries. There was a huge buzz surrounding the gloriously named Cockwomble, here with ‘Want Stuff Buy Stuff’ which appears on this Brighton bands just released debut album; its furious, yet crammed with neat riffs and insanely catchy… expect to see them on a bigger stage at Rebellion 2020.

Hellfury are another band who travelled over from Texas to deliver their female voiced hardcore, ‘Nomad’ is lifted from the bands debut 5-track; if US harcore is your thing then its well worth hunting down.

In utter contrast to everything else at the festival are I, Doris who describe themselves as playing ‘Mummycore riotpop kitchenpunx’ here with ‘The Girl From Clapham’ a brilliant lo-fi mangling of Squeeze’ ‘Up The Junction’ from a female point of view; sadly I missed their live set, on the evidence here, this is another band worthy of further attention. 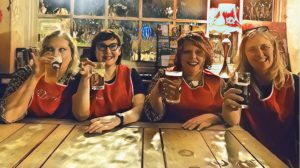 Norways Sugar Louise bring some good ol’ rock ‘n’ roll to the event, ‘I Don’t Wanna Be Me’ has a sleazy Hanoi Rocks vibe to it which reminded me of Johny Skullknuckles Kopek Millionaires.

Dead Mob are a young band from Birmingham, the disingenuous, yet cherubic Facebook picture suggests the band might be a school project; that said they hammer out a heady mix of sludge metal tinged punk that should see them gaining plenty of attention, as will Rotton Foxes who despite the tagline ‘Hot Shorts Containing Hot Guys’ don’t sound like Village People, instead this Brighton 4-piece utterly trash your head with 54 secs of ‘Work’ à la Pizza Tramp if you need a lose reference.

Its a huge release to objectively work through; without doubt there will be something there for everyone; the styles range from hardcore, ska, new wave to deathcore metal and the plain, yet very welcome odd. What is also clearly evident are the efforts of the festival organisers to bring bands from every corner of the globe, to encourage diversity, be it gender, orientation, race etc and that is to be applauded. For those that criticise Rebellion as a retro event, the RIS and this album demonstrates the positive thinking of the organisers and their desire to provide a showcase for new artists.

The 2020 Rebellion Festival takes place between Thursday 6th – Sunday 9th August. Advance tickets are on sale now. Louder Than War is a Official ticket outlet, we have a limited number of ‘Early Bird’ tickets available; Head to the LTW Shop.

NB: Review updated to reflect the correct country of origin of The Bolokos.