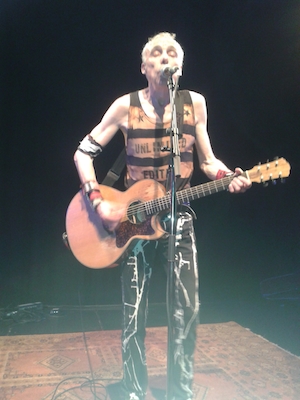 The day is young and The Melkweg is peppered with punks carefully scheduling where they need to be and when. Hundreds of familiar faces and a profound amount of accents have invaded. Rebellion has come to Amsterdam.

The best thing about Rebellion is not only that the bands you love and have seen million times before are performing, but they are alongside new names that you are likely to become faithful followers of. While the tight timings and copious amount of clashes are exhausting to organise your way around, any attendee is never short of something to watch.

Catching the tail end of the interesting Dutch hardcore ensemble, O.D Kids, on arrival – I’m sorry to say that we didn’t arrive 10 minutes earlier. Considering that it was so early in the day, they had pulled in a hearty crowd with many of the locals singing along.

But the reason we, amongst many others, were heading down for early doors was for one reason. Gimp Fist is a prime example of a more recent band that has now built a strong following.

We’ve got the first beers in and Gimp Fist start off the set with the crowd pleaser, First in Line, the band are influenced predominantly by 80’s British Oi! bands, and have gone on to support the likes of The Business, and Argy Bargy. They fill their set with gargantuan choruses and mid-paced stomping, heard particularly in Pick Up The Pieces and the amusing Just Another Country. The drumming throughout the set was effortlessly brilliant and the band as a whole gave a tight performance.

It’s swiftly reached mid afternoon. The troops are not only filling the stages but also flocking to merch stands, which are no comparison to the volume at Blackpool, but there’s still plenty to see. Many of them manned by the band members, fans seize the opportunity to speak to the names they admire.

After a short meander through the merch, some light hearted, afternoon easy listening Oi! is in order. I don’t understand any of the cricket references, which rules out a large percentage of their between song banter, but Geoffrey Oicott are certainly a good laugh. Greeted by the Yorrrkshiire chants, many northerners congregated. A handful of spectators are bobbing frantically, while the majority of the crowd are tapping their feet politely. The tracks LBW and Gary Thompson, two of their most recognisable songs, get more of a reaction out of the crowd if still slightly sedate. They are perhaps not the most lyrically stimulating songs, but definitely tracks that everyone can have a sing along to, and have fun listening to.

999 are about to start on The Max stage next door. The squawking voice of Nick Cash announced that they were one of the first punk bands to form the scene. It does feel like they’ve been around forever, and looking back, they have! It’s difficult to imagine the day without them. Their stage presence is electric. The energy that these blokes bring to the show is raucous. Everyone is singing along to Feeling Alright With the Crew, and every knee in the house is jerking. After the 999 set finished, many fans were looking forward for the Nick Cash acoustic set later in the afternoon.

The rush has started, and I myself am struggling to decide who to sacrifice.

We follow the wave of people, flooding upstairs to the Almost Acoustic stage for Louise Distras’ performance. The dark, drama studio style stage was almost full. Brilliantly atmospheric, with the stage simply lit, complete with Lebowski rug centre stage. I’m not sure if it tied the room together, but it became a topic of conversation on a few occasions. Opening with People of the Abyss, the first note Louise struck had the audience hanging on her every word. Previously described by LTW as the love child Patti Smith and Billy Bragg never had, Louise has become quite an iconic figure around the punk scene. Priding herself on her inspirational lyrics, she aims to demolish division within society, promote working class unity, and encourage women’s empowerment. Playing the tracks from her debut album, Dreams From the Factory Floor, which judging by the amount of people singing along has been a huge hit – the passion in her prevailing vocals cannot be avoided, flickering seamlessly between raspy fury and soft and angelic. 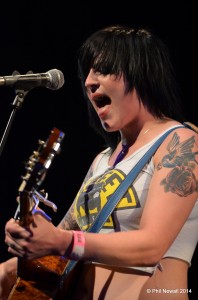 TV Smith later graced the Almost Acoustic stage. Filled with poetic magnificence, his storytelling is captivating. His performance was timeless, full of stunningly crafted tracks such as Expensive Being Poor, Immortal Rich, and solo renditions of the Adverts’ tracks Great British Mistake and Gary Gilmore’s Eyes. There wasn’t a low point in the whole set, just great song after great song; some upbeat, and some more subdued. The man is a human jukebox. Smith was definitely the highlight of the day for me. Especially during what was quite an emotional performance of Generation Y.

Back downstairs on in The Old Room stage, just in time for the 2nd half of Berlin-based band, Church of Confidence, who are probably still the most underrated Rebellion regulars. Full of trainlike, Rockabilly goodness, we were all enticed by the memorable riffs and endless hooks. The band rounded off their set distinctively with a Motorhead cover of  Going to Brazil’.

Desperate for 5 minutes of fresh air and something to eat, we took a quick breather around the corner from the venue, in what appeared to be punk celebrity square. It was great to see the culture of the Amsterdam seasoned with Rebellioners, discussing bands, songs and the weekend’s goings on, outside a hectic Irish bar. Amongst the rabble were the likes of Colin McFaull from Cock Sparrer, to Pete G.O.R.G.E.O.U.S from Goldblade.

Next on the agenda was The Damned. Pursuing a different avenue, chock full of 80s piano, and Dave Vanian’s theatrical vocals. It has been commented on that The Damned have been hit and miss over the past few years. This weekend seemed to be an exception, appearing thoroughly on form. After the performance of a pitch perfect Eloise we decided to regretfully miss the best of what was to come, and sample the stage next door.

The shirt is off, and John Robb is bouncing around like a frog on a trampoline. Goldblade are renowned for their crowd involvement. The microphone probably spends just as much time in crowd members faces, as it does in John Robb’s. And as for the stage invasions, one of my previous experiences of a Goldblade gig involved a bunch of girls, including myself, being escorted off stage at Birmingham in 2012. It was nice to see that Amsterdam allowed the frolics at this year’s gig. The choruses to every song are wonderfully easy to remember. It is almost guaranteed that you will be singing along by the second chorus. The crowd erupted at one of the bands most instant songs, Psycho, the audience flailing hysterically, and reciting the lyrics at the top of their voices.

The final set is upon us, and the enormous crowd has assembled at the Max stage. Cock Sparrer was an excellent end to a great day, and I’d challenge anyone to top it. Their set bursting with crowd favourites, providing the ultimate singalong for every drunken soul left standing. Obvious favourite being England Belongs To Me, people in their dozens linking arms, and coming together before the lights came on.

All words by Kelly Johns. This is Kelly’s first piece for Louder Than War .