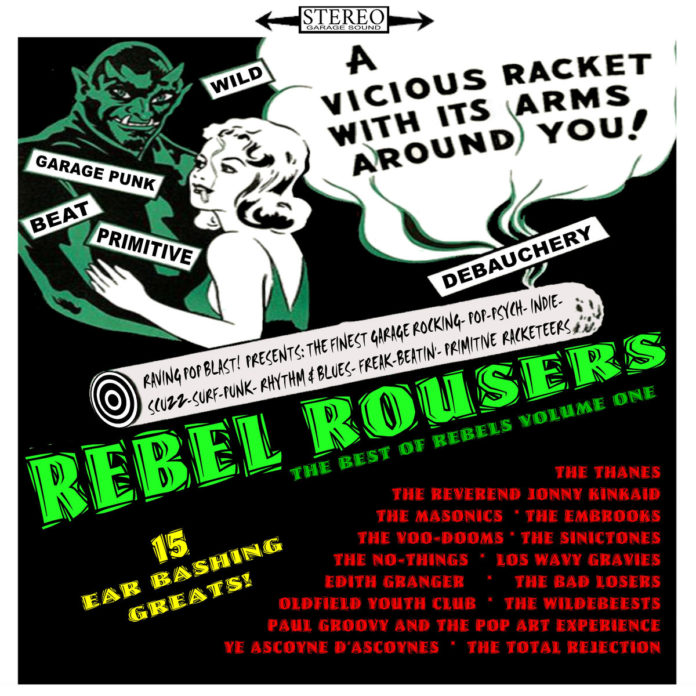 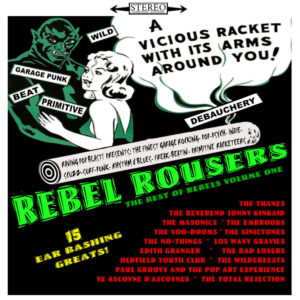 They say  – A collection of bands & songs, in a Garage-Punk-Pop-Psych-Indie-Scuzz-Surf-Rhythm & Blues-Freakbeat Primitive style. All different! But all with a healthy DIY attitude and doing their bit to help keep the real Rock And Roll Spirit alive! And all for charity (Profits from the sale of this album, will go to CLIC Sargent-Young Lives Vs Cancer)   We say – probably the best old-fashioned Garage Rock’n’Roll compilation released this year. Essential for fans of Nuggets type comps, Billy Childish style stuff and so on.

Waay-back, before the ‘mixtape’ and the ‘playlist’ …. when life was in black & white and only music in-colour… first there was the ‘budget’ K-Tel hits compilation – the gateway to music for pre-teens…but then there was the actual, original artists ones… then these.. and these…

I have always loved a decent various-artists compilation album.  I bought my first one aged 13 in 1977- the red-covered New Wave album on Phonogram which showcased the Damned, Dead Boys, Runaways, Ramones, New York Dolls and Boomtown Rats among others. It shaped my tastes for the rest of my life. A primer in (mainly) American proto-punk.

From Lenny Kayes Nuggets to the NME’s C86, certain various artists compilations have arguably been more important than a lot of actual bands.  They define a scene, a sound or an attitude.  And they gave you a variety: choices –  which band(s) to seek-out and follow…

This collection is a modestly crucial collection of (mainly) UK underground sounds specifically of Groovy Garage-Punk ‘Trash’ ilk -if you get my drift.

I reviewed a previous Raving Pop Blast comp  – The Longest Summer On Record –here -and this new one is even better as its wider in it’s scope and has pulled together some real heroes of the Medway Punk / Garage Trash scene , together with the Bristol-area mainstays and newer bands. Not all of the material is brand new, but it captures an essence of a type of band and an attitude more than a sound or style.  The guitar is king, the synthesizer never made it off the drawing board and the Sixties Never Ended -perhaps being the key.

Compiler in chief  Arthur from the Total Rejection places his band mid way through the sequence – hoping to achieve peak groovy.  The only reason he doesn’t achieve this as practically every track is a winner.  The whole album seems so natural in its order of play. No two tracks sound exactly the same but there is an underlying cohesion.  No synths, no hint of modernity, just the sound of 50’s, 60’s, 70’s rock’n’pop played in a garage.

It really is, in my ever-so-humble opinion, one of the most enjoyable compilation albums I’ve ever heard. It’s just non-stop fun, tunes, wild guitars, cliche and aesthetics.  It’s how music should sound: the Imagined Sixties (which most of us only knew as a child) with a teenage attitude retained from punk abandon and autumn-of-our-lives rage.

I literally listened to this album non-stop for 2 days eight-hours-a-day (yeah WFH lockdown) and never tired of it.  A track-by-track rundown won’t do it justice, but here goes.

The No-Things – And Then She Was Gone opens: Real Nuggets-y stuff with harmonica, guitars and call and response vocals. Superb dirty rock’n’roll from Edinburgh.

The Embrooks – It’s Time You Realised: which follows is pure Punk-Rock speed Beatles from the American combo.

Paul Groovy & The Pop Art Experience – You’re The Best Thing.  Portsmouth legends reunited and at their best on this classy piece of power-pop primitivism. The Queen Hornet (from the legendary Green Hornets) is on stand-up drums and backing vocals and Groovy sings in an American accent – but it matters not and bodes well for their next release He’s A Liar out in June on Spinout Nuggets

The Thanes – Heed The Warning  has a guitar sound to die for – wonderful old tyme psych.

The Voo-Dooms – Another Teenage Dance Craze is from this and they have an LP on Trash Wax and this is my personal absolute favourite track – a dance craze song for the undead. Medway hero Bruce Brand plays bass instead of his usual drums with the band and just about gets away with it.

Ye Ascoyne D’Ascoynes – Everything Is What You Make It  Featuring members of the Dentists, Armitage Shanks and Subway Sect – this is a classic, yet unpronounceabley-named band who are just joyful garage masters.

The Total Rejection – You Can’t Get Your Money Back  Just sheer one-take perfection. Despite the obvious influences, TTR have a distinctive sound with Arthurs whispered vocal menace, wild guitar and a killer drummer.

Edith Granger – Kenny  A real 1975 New York whine to this piece of moody bass-lead garage proto-punk.  They seem to be an American/Canadian duo inspired by TV Personalities and I’m gonna have to check out their bandcamp back catalogue

The Wildebeests – Motorhead  An absolutely phenomenal cover halfway between the Hawkwind and Motorhead original versions of the song…..from the Garage Kings of the cover version – their Mongoloid is essential listening too.

The Bad Losers – Who’s Right, Who’s Wrong?  Absolute classic piece of Merseybeat songwriting.  Up there with the Kaisers.  More bandcamp stuff to check out!

Oldfield Youth Club – The Last Straw   Slow, moody but magnificent piece of fatalism from veteran band made up of former members of The Last Party and Bitter Springs. More black humour and spikey tunes on their Bandcamp.  But this is their finest song to date.

The Sinictones – Because She Said.  Starts off not unlike my favourite Garage bad-boys Bullybones – Sex Beat Punk which sounds like a car-chase round winding mountain roads. A band to look out for when the live circuit resurrects itself. Best lyric on the album is a line rhyming ‘take of all your clothes’ with ‘blow your mind out through your nose’.

When life gets you down and things look impossible… there is nothing better than an album which you knew was gonna be ‘good’, turns out to be the best thing you’ve heard for a year – and makes you smile, wanna dance and feel alive, albeit in a groovy fantasy world of bowl cuts, stripey t-shirts and beatle-boots.

Rebel Rousers is escapism as survival in Garage-Punk-Pop-Psych-Indie-Scuzz-Surf-Rhythm & Blues-Freakbeat form.