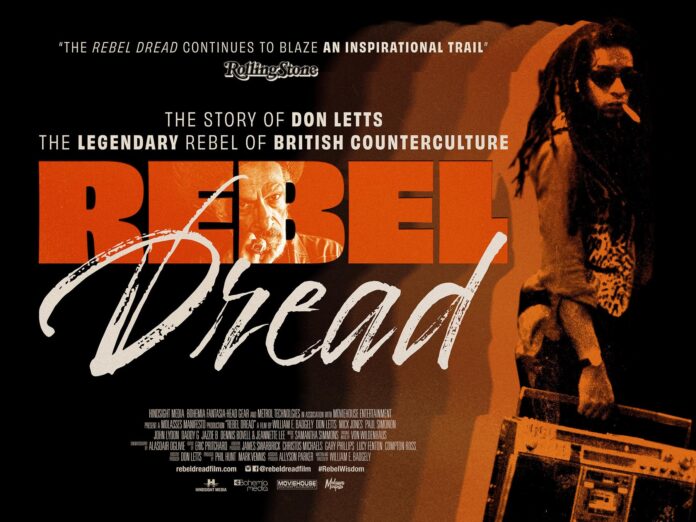 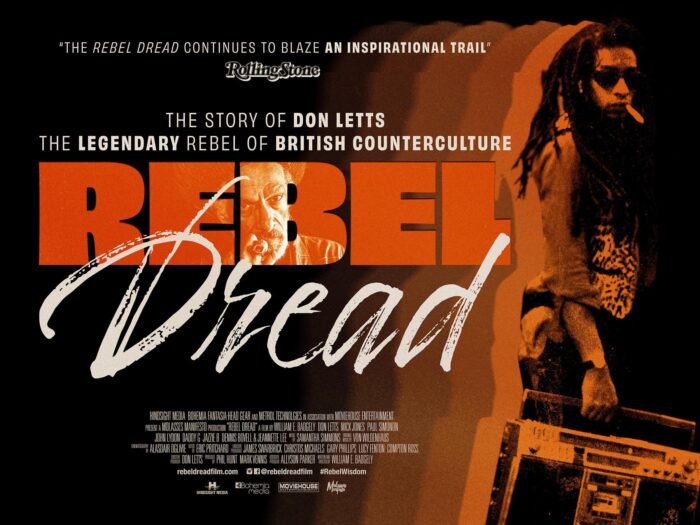 ‘Rebel Dread’ is a new feature length documentary bio-pic, chronicling the life of Don Letts, a prime mover and shaker in British musical and cultural circles, dating back to the original Punk era. As a DJ, video/film-maker, musician and radio presenter, Don’s career has straddled deeply influential moments in modern British music history and the film pays fascinating testament to the footprints he has left on the nation’s cultural landscape.

Commencing with an outline of his early years, the individual ‘Rebel’ streak that would ignite Don’s creative drive, is encapsulated in a tale of how he set fire to his desk as a 11 year old schoolboy. Don himself suggests that this was the moment in which he started to own his own sense of personal identity, a focus which would bear distinctive harvests in the decades to follow. His role as a young, black dreadlocked DJ at London’s legendary Punk Club ”The Roxy”, has already permeated cultural folklore, but Don provides revealing insights into the journey which led him there after periods of employment in notable Kings Rd clothes shops of the time.

This era coincided with his initial foray’s into film-making, following the gift of a Super-8 camera from Carolyn Baker. His vintage footage shot at the time captures many main characters of the Punk era, both onstage and backstage at The Roxy. Don spent 3 months documenting the Punk movement in this fashion, which culminated in creation of his first noted work ”The Punk Rock Movie”, which premiered at London’s ‘Institute of Contemporary Arts’ in Autumn, 1977. Don’s contribution to the cultural fusion between Punk and Reggae and a generation of British youth is dutifully recorded. ‘Cool runnings’ personified.

From thereon, ‘Rebel Dread’ follows Don’s journey through the 80s, 90s and on into the 21st century. His participation in Mick Jones’s highly influential second major band Big Audio Dynamite, is covered in depth along with the crucial role he played in helping to overcome the white-dominated video product of MTV. In referential equation with the subject of systematic racism in Britain, Don comments ironically on the ground-breaking video he made with teen Reggae sensations ‘Musical Youth’ and the symbolism achieved via the young performers of a number one pop chart record, being filmed opposite the Houses of Parliament. Sometimes subtle messages are indeed extremely powerful.

Artistically, the film’s Director William E. Badgely deploys one of Don’s own stylistic trademarks, framing its interviewees against a completely black background, something he pursued with dramatic impact in his Grammy-winning Clash documentary ”Westway to the World” (2000). Notable contributors such as Mick Jones, John Lydon, Don’s girlfriend during the Punk era Jeantte Lee (later of Public Image Ltd), Jazzy B, his brother Derek, Daddy G (from Massive Attack), Norman Jay and others provide fraternal anecdotes and testimonies to his life via this format, which once again bears fruit in terms of establishing intimacy and focus.

In narration terms, Don himself talks into camera throughout, with his delivery being framed in a conversational style, peppered with offbeat humour and irony. In one particular moment of attractive self-deprecation, he reflects on his ‘Screaming Target’ musical project with the observation: ”Perhaps I should have employed a lead singer”.

The ultimate treasure trove of the movie, is provided by Don’s own magnificent archive of vintage footage and photographs, which ensure his narration is richly enhanced by now genuinely historical visual elements.

‘Rebel Dread’ is undoubtedly a very important film. It is not only an informative and entertaining portrait of a man whose life brushed shoulders with many seminal cultural icons and moments, but stands as a vital embodiment of a singular, highly creative journey inside the Black British experience.

Don’s observations on his experiences making films in Africa, are perhaps the most poignant, powerfully honest moments of the film, which is an absolute ‘must-see’ for anybody touched by the momentous cultural energies documented here.

‘REBEL DREAD’ was directed by WILLIAM E. BADGELY and edited by ERIC PRITCHARD. It was produced by MARK VENNIS and PHIL HUNT.

‘REBEL DREAD’ can be seen via the following public screenings.