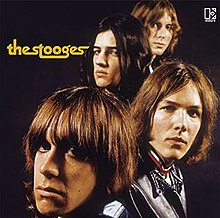 Yesterday (5th August) saw The Stooges seminal self-titled debut album turn 50. Simon Tucker looks back at an album that still has more to say all these years later.

From the wah-wah slink that bleeds into a tribal cyclical Blues of opener 1969 The Stooges get you. The introduction of the singer with an “well al’right” and the opening gambit of  “Well it’s 1969 OK all across the USA / It’s another year for me and you / Another year with nothing to do” tells us this is different, new, exotic…dangerous. This wasn’t The Velvet Underground or The Doors. Those bands were thrilling to the extreme of course (especially the former) and they both carry an influence that seeps through The Stooges and the rest of the world, however, there was and remains a highly artistic bent to their music that often spilled over into pretentiousness (the latter). Looking at these three bands through the lens of historical study you are often filled with the images of Morrison either all lithe and dangerous (the early years) or bearded and bloated (the later years). The Velvet Underground are often shown in their Factory days looking cool as fuck but aloof and unapproachable. Then there is The Stooges. The Stooges were different in the fact they had a frontman that looked equally dangerous, sexy…intoxicating. The rest of the band are either standing still and staring at the audience like they actually despise them whilst the drummer smashes out rhythms that lock the band into a tradition of the Blues music their singer so loved whilst adding something different, something new and something that would set fire to the minds of young people all over the world. This wasn’t waffling poetry or talks of being a “shaman”. This was slash and burn, direct, minimal and spin your guts over your head music that got right under your skin.

The Stooges remains a powerful statement because of its core values. Lyrics about sex, boredom, destruction. Music that is somehow familiar yet utterly new. Music you believe you can play yourself. Many tried of course with bands who would go on to create what become known as Punk music often covering one or more of its songs yet they never ever could match that certain magik the Stooges had. Watching footage of the The Sex Pistols covering ‘No Fun’ is often just that. There is a darkness to this album that matches anything The Rolling Stones were invoking and is seeped in a pure nihilism. A begging to be beaten down and treated like an unwanted pet by a lover with ‘I Wanna Be Your Dog’ or the descent into madness and death that is ‘We Will Fall’ (which is the closest the band got to actually sounding like anyone else. In this case being the aforementioned Velvets whose John Cale produced the album). This was not music to “put flowers in your hair” to. This was one more nail in the coffin of 1960s America.

Is this album relevant now? Of course it is. It is actually quite frightening how relevant it remains. The Stooges were America’s forgotten sons. Their unwashed and unwanted. Left to dwell in an area of America decimated by the collapse of industry. Poor, hungry and angry Iggy and the Dum Dum Boys could today (justifiably) be Trump  supporters feeling disconnected and lost and in need of lashing out at the “establishment”. This is why the album holds ups so strongly. There will never be a point where we are not being mistreated by politicians, corporations or celebrity “influencers”. There will always be angry and bored young adults wanting to kick out and destroy what they perceive as the status quo. That is the very nature of human existence. These youngsters will need a soundtrack and whilst they will have their modern artists to inspire them there will always be those that like to investigate further back. To find the source. You reading this have done this and so have I. Whether you got to The Stooges via Nirvana, Joy Division, David Bowie or even a certain show on 6Music you have gone back there and pressed play on this sonic eruption of testosterone, intelligence and raw sex appeal. The Stooges is music to fight, destroy or shag to. It tells as much a truth about America as The Godfather or Burroughs’ Junky and is more akin to Miles Davis In A Silent Way which was also turns 50 this year and which is also an essential point in understanding of where American art was headed. It is a document with enough gaps between the lines to fill in your own ideas and emotions. A sexual aggression that stands high against its contemporaries.

The fact that The Stooges would go on to not only match the quality of their debut but surpass it with their second and third albums is a testament to the bands vision and ambitions but it is here where it all begins. It is here where both in the States and over here many young peoples imaginations were fired up and given license to get out there and do it yourself. This is where a band told you you could sing about the mundane minutiae of your own life and turn it into high art. You could be the bookish teen with a thirst for knowledge and an ambition to get to art school or you could be the teen slowly turning down the wrong road and headed for conflict. It simply didn’t matter for the message of The Stooges was and remains universal. Celebrate its birthday by either cranking it up loud and dancing like no one is watching or get it on your headphones, dive inside yourself and find your own well of inspiration. Whichever way you chose just know that in 50 years time there will be a young person doing exactly that same thing and that my friends is how you know you are in the presence of greatness.