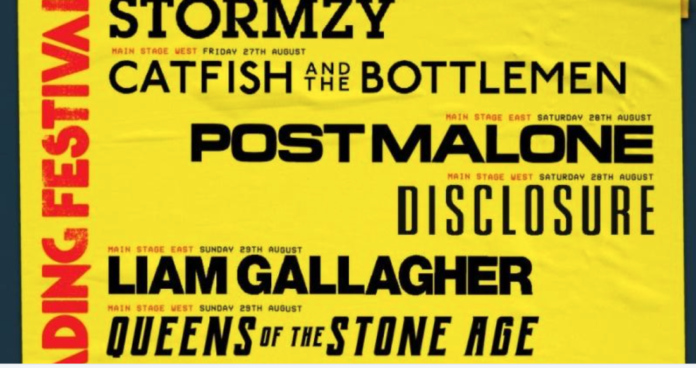 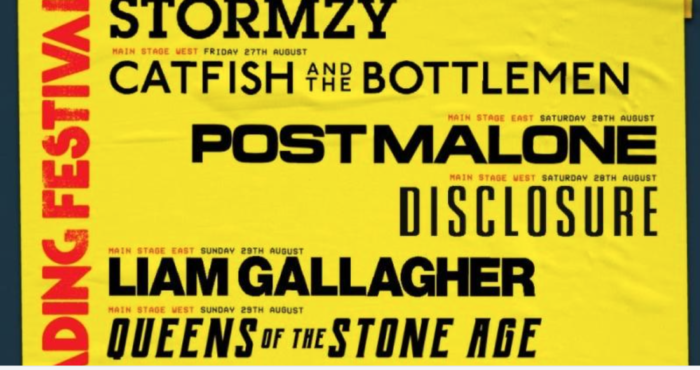 Of course it’s not as easy as it looks booking these festivals…maybe there were no female headliners around that weekend, maybe some festivals are stuck with a type of music that is mainly played by blokes and they can’t change or maybe they just didn’t try to hard. Lucy Wynne is not happy about Reading/Leeds all male headliners for 2021 and can’t believe it’s still like this…

After Reading and Leeds Festival announced their headliners and some of the acts, there has been uproar on social media about the lack of representation of female artists. This does beg the question.. Is there a lack of female talent, and that no female acts are worthy of being headliners? Absolutely not. To name a few females that would make incredible headliners, who are active in their music making, staying relevant, and selling records are: Taylor Swift, Dua Lipa, Halsey, Billie Eilish, Florence + the Machine, Paramore, Cardi B, Miley Cyrus, Lady Gaga, Ariana Grande, Nicki Minaj, and Lana Del Ray, could all easily headline R&L – and bring in large, great crowds.

I mean the line up isn’t exactly great – full stop. There are so many bands/artists that are more worthy of those headline slots in comparison to those who have been given them. Hear me out…

Post Malone is ok… but let’s face it – his last album Hollywood’s Bleeding (2019) was a bit of a flop. Especially in comparison to his first two albums that gave him the success and fame he has now. Catfish and the Bottlemen… great band – in 2015. Catfish are a great slot on a festival because they’re a classic indie band with a few mainstream hits, but they are in no way deserving of a headline slot at Reading and Leeds – especially not in 2021. Same thing as Mr.Malone, great first two albums which got them their success, however Catfish peaked in 2015/2016… and this is for a festival in 2021…I feel like even Stormzy and Liam Gallagher as headlines don’t see fit. The line up is just so out-dated, clearly just like RandL’s political stance.

Some great new music has been brought out in the last 12 months from female artists, such as Taylor Swift’s new Folklore album, Hasley’s Manic, Dua Lipa’s disco album Future Nostalgia, Lady Gaga’s unapologetic pop album Chromatica and Lana Del Ray’s Norman Fucking Rockwell to name a few. These albums have all been, and still are, absolutely huge.

It’s as though festivals add female artists to the line up just to cover their own back rather than because they actually think they’d be a good act. They tend to see no competition with female artists fighting for the headline slots over male artists, and it’s not to do with a lack of talent or the headliners being ridiculously more successful and on trend than other acts. It is just blatant sexism still being displayed at one of the biggest festivals in the UK in 2020.

For anyone that’s got any arguments against this, I suggest you look at this list that’s been collated of all the headliners across the past ten years at Reading and Leeds. Like @CiaraW_Media says, “It’s time to acknowledge the sexism in the industry and the lack of representation for non-male artists.” The more we let this happen, the more it will continue to happen. There’s some fierce female competition out there for headline slots in 2020 and yet they’re being ignored and completely disregarded again for someone that made it big three to four years ago and has been practically living under a rock ever since. 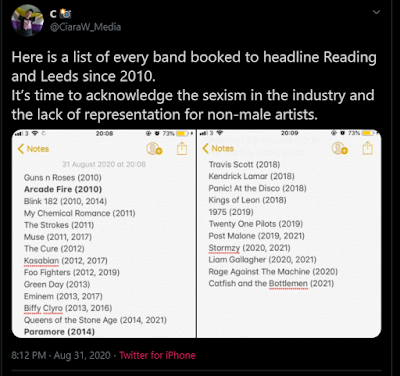 Regardless of gender – the acts should be selected on what the audience wants, and who is trending right now. This line up would’ve suited 2016, but come on … so much more music has been released since, and so many more hot new artists have emerged. To have no females headlining in 2020, the year everyone’s been fighting for equality really does speak volumes for the festival organisers… Read the room… The only positive thing about the line up so far is Doja Cat. Where’s Cardi B? Meg Thee Stallion? Nicki Minaj? Jorja Smith? Come on!

People (mainly men) will say, “If you don’t like the line-up, then don’t go!” Again, this is just ignoring the problem which will continue if everyone remains quiet about the lack of non-male representation within the headline slots at festivals, and in the music industry as a whole. You might like all of the headliners but it doesn’t deter from the fact the festival clearly isn’t supporting any of the female artists within the industry – even after all these years, and all of these complaints. There’s so much female talent out there at the moment, yet still we can’t have ONE female headliner? It really is pathetic, and incredibly embarrassing on their behalf. The female talent is out there and readily available, but it’s just not being chosen. That is the bottom line.