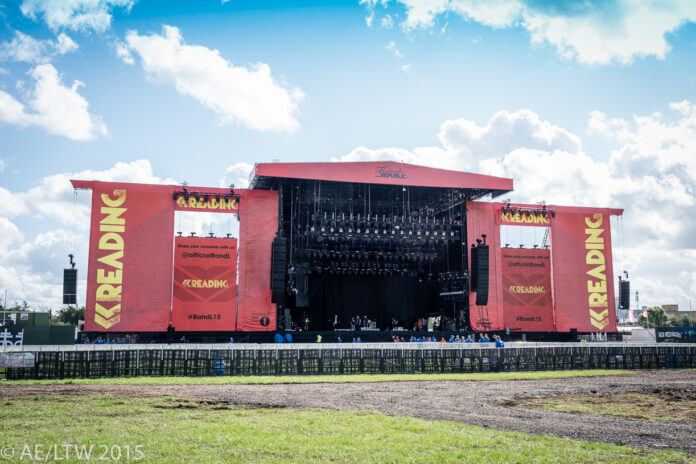 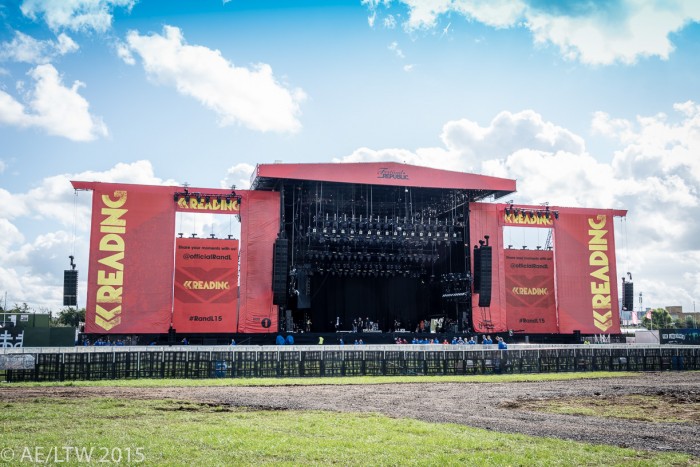 Festivals!  We all have our favourites and sometimes the fact that we do blinds us to all that goes on elsewhere.  At any festival you had best pack an open mind and a sense of humour, Louder Than War’s Alan Ewart took both along to this years Reading Festival.  Read on if you would like to know what he found.

I went along to the 2014 version of Reading Festival and if I am honest I didn’t have a great time.  On reflection that was my fault.  I wasn’t in a good place mentally, I was physically exhausted and as a result I realised that I had not given the festival a real opportunity to win a place in my heart.

I loved the look of the 2015 line-up and my son, his girlfriend and a couple of his friends were all keen to go so I decided to give Reading another look.  I am really glad I did because it was amazing. I must confess that I thought the age profile of the crowd this year was a bit higher, perhaps as a result of the Main Stage headliners, Mumford and Sons, Metallica and Libertines appealing to a more mature audience.  I found the atmosphere incredible throughout the weekend.  It is probably fair to say that the majority of this year’s audience was under 25-years-old but I found the crowd friendly, energetic, enthusiastic and for the most part polite.

Of course there was the odd idiot who drank too much and there was some evidence of drug taking and the use of Nitrous Oxide but no more than at any other festival and considerably less than at Glastonbury for example.

Over the past few years Reading (and sister festival Leeds) have developed a reputation as a sort of ‘coming out party’ for kids who have just received their “A” Level or GCSE results and who want a last bash before heading back to school or university.  There is undoubtably an element of this as large groups of young people get together for a weekend of partying.  You know what though?  I know how to party too and I have been doing it since long before the majority of the audience were even born.  Approach Reading with the mindset of having a great time and you most certainly will. 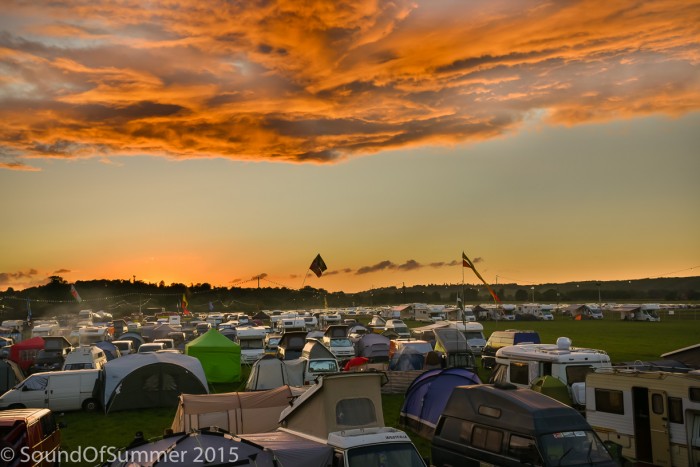 The campsites are undoubtably the worst part of any major festival.  The site at Reading sits on the banks of the river Thames.  Blessed, as we were, with a couple of weeks of wet weather on the run up to Reading Festival the campsites were wet, and they were muddy.  Reading Festival however has steel walkways across the major routes throughout the site.  They brought in pumps and bowsers to drain the water and they laid down straw.  It was muddy in the campsites, but the organisers did all they could to lessen the impact of the weather conditions.  They even sent out messages saying it was muddy and telling people to bring wellies.  It is not the fault of the organisers that idiots still turn up in high heels, flip-flops or white canvas plimsoles.  Sadly there is no cure for stupidity!

I was of course in the Camper Van field.  It was excellent, flat as a board and spacious.  It was also, for the most part anyway, kept reasonably clean and tidy.  A few more toilets wouldn’t have gone amiss but it was secure and reasonably quiet at night.  The only downside was a 30-minute walk to the arena though this was a shorter walk than at Glastonbury.

As at any major festival these days the range of food on offer is mind boggling.  Just about everything you could think of was available.  Prices are standardised as part of the catering contract with retailers and it must be said that food was at the more expensive end of the spectrum.  Drink prices in my view were outrageous at £4.90 a pint and you cannot take any alcohol into the arena.  This doesn’t sit comfortably with me.  Many smaller festivals charge £3 – £3.50 a pint and do very well at the bars.  I suspect that Reading’s pricing and ban on carrying alcohol in is more to do with discouraging excess among the younger crowd than profiteering but it does penalise the majority.  As a result I bought just one drink in the arena all weekend despite a wallet full of £20 notes.

I go to festivals primarily for the music and the music at Reading this year was exceptional.  On Friday the line-up on the main stage was devoted mostly to pop punk bands with the likes of Neck Deep, Panic! At The Disco, and All Time Low all turning in fantastic sets.

That said Friday’s highlights for me were the Struts and Limp Bizkit on the NME/Radio 1 stage.  The Struts were new to me but I loved their “over the top” flamboyance.  Frontman Luke Spiller has a touch of Freddie Mercury about him, charismatic, a little camp and totally OTT, he is a great focus for a really enjoyable indie rock band.  I will look forward to seeing their career develop in the years to come. 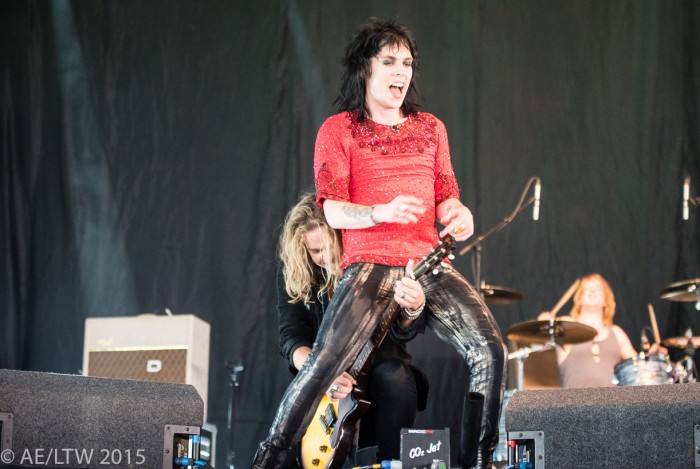 I was also hugely impressed by Sunset Sons on the festival republic stage.  These guys are hotly tipped after a set on the BBC introducing stage at Reading last year.  They are set to become a major force on the Indie scene as time goes on, and a European tour in support of Imagine Dragons is sure to win them a legion of new fans.

My favourite spot at Reading is the Pit/Lock-up stage and on Friday were were treated to a veritable who’s who of some of the most influential hardcore punk bands in history.  Modern Life Is War, The Bronx and New Found Glory each turned in an incredible performance, each very special in their own way.  I don’t mind telling you I was emotionally drained by the end of this trio of performances.  The intensity, the vitality and the sheer joy of performance was nothing short of incredible. I felt humbled by it all.

Saturday saw me take in performances by a range of bands but my focus for the day was at the NME/Radio 1 stage. Slaves, Wolf Alice, Everything Everything and Catfish and the Bottlemen all turned in fantastic sets in front of huge and very enthusiastic crowds at this stage.  I was also lucky to be able to check out amazing performances from Royal Blood, Marmozets and Pierce the Veil on the main stage but it was Bring Me The Horizon who turned in the performance of the day.  They really did give a masterclass in British metal Music.  This is a band that is sure to be main stage headliners at Reading and Download in the coming years.

Saturday headliners Metallica turned in a cracker of a show full of their usual pomposity and visually stunning but for intensity Bring Me The Horizon carried the day. 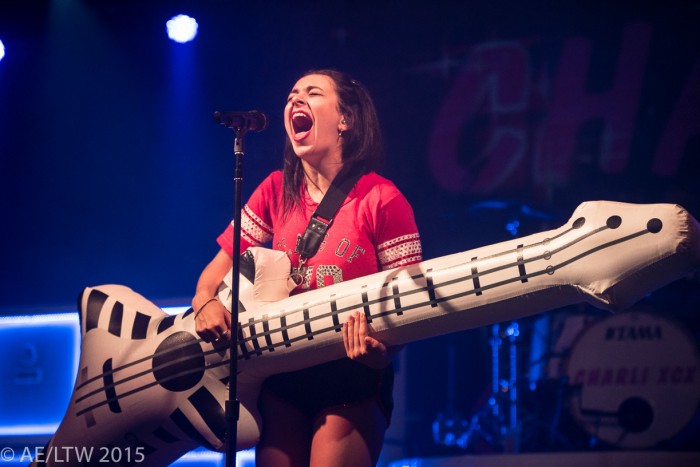 Another highlight for me on Saturday is a new little guilty secret for me but I will share it with you.  Late afternoon Saturday the rain poured down and I found myself with a half hour to kill before Catfish and the Bottlemen started.  I read a story by another writer at Louder Than war who had gone along to a Charli XCX show and loved it.  The dance tent was closest to the NME stage so I thought I would kill a few minutes by photographing her.  To my total surprise I loved her.  Charli is a great entertainer, I am not a fan of the sort of girly pop-rap that she is labelled with but I loved her energy and her self-deprecating sense of humour.  Charli even performed a song whilst wielding an inflatable guitar that must have been twice her size.

Sunday saw me spending the whole day dashing between the Lock-up and Festival republic stages. The line-up across these two stages was nothing short of amazing. Queen Kwong, Moose Blood, Turbo Wolf, Frank Carter, Bury Tomorrow, We Are The Ocean, Little Comets and Manchester Orchestra were all fantastic but it was one long standing artist and one fairly new to me that stole the entire weekend.

The performance by Caleb Shomo’s Beartooth was mind-blowing.  Beartooth draw on a range of influences and those influences come over loud and clear in their live performances.  I guess punk influenced metal music suggests that beartooth sit in the Metalcore genre.  The reality is so much more and Shomo is the fulcrum around which everything else revolves.  It is angry, personal, painful and intense, it is a tour-de-force and if there is any justice in the world Beartooth will go on to become one of the worlds biggest bands.

The longstanding artist was Frank Turner who headlined the Festival Republic stage, his solo acoustic set was one of the best performances I have seen from him and a fitting closure to a brilliant weekend for me.  It was also Frank’s record breaking 9th year in a row at Reading and he has promised to be back next year to make a decade on the bounce.  Turner’s set was a special one, full of sing-a-long favourites mixed with a few rarities. 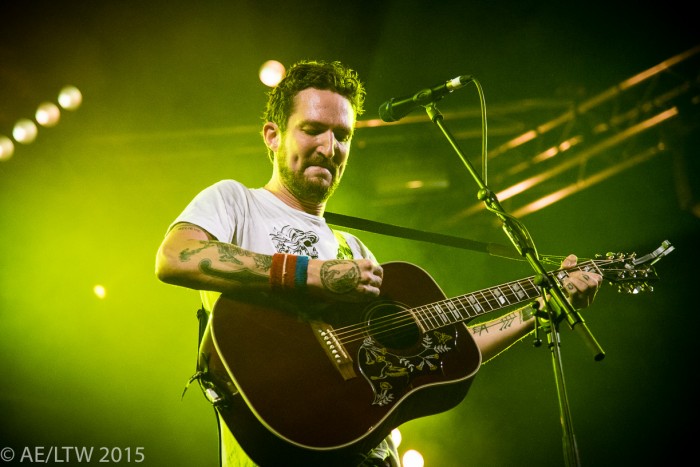 The closure of Frank’s set saw me and the rest of my party wander back to the van for a drink and a little end of festival celebration.  None of us were keen on seeing the Libertines.  I didn’t enjoy them at Glastonbury so I was happy to give them a miss.

Reading Festival this year was simply brilliant.  There is something for everyone, a great balance between established and breaking acts and not a dull moment through the whole weekend.  I can probably sum up Reading Festival in two words.  Reading Rocks!

Thanks Reading, I’ll be seeing you next year.