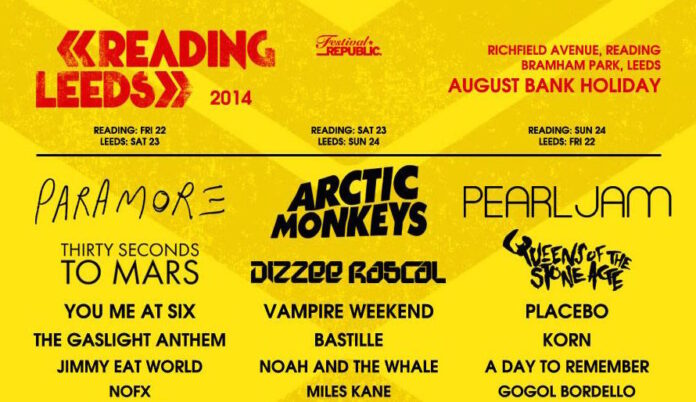 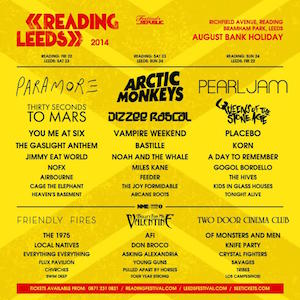 What: It’s that time of the year again; the one where secret sets commence, the one where bottle throwing is completely acceptable in special cases, *cough* Daphne and Celeste *cough*, the mecca for music fans of all shape and size… Yes, next weekend sees the return of Reading. The big one. The end of the year spectacle before we all have to go back to school or college or uni or work or sofa surfing. Heralded as the festival for the music and bereft of all pretension, the spirit of Reading, not including setting tents on fire, has always been that of the true music fan. More than anything, it’s a gathering of like-minded people who also enjoy making bonfires and dancing in silent arenas where only they can hear the music. One of the last few rock and roll fuelled festivals, no one cares what clothes you’re wearing or what cuisine you’re eating here; just whether you can mosh.

Who: Although the headliners have been touted as somewhat predictable, no one’s going to bring bigger thrills to the masses than what this year’s dirty lot have to offer. The palette of tastes painted in the guitar field is a broad spectrum indeed. In the one corner we have the slick, emo-pop offerings of Paramore in a shuffling ascent to the top, joint with rock titans Queen Of The Stone Age in a double headline bill. Add a trio of new school-punkers under the moniker Blink 182, and Britain’s most cherished and biggest current band, Arctic Monkey’s and you have a pretty sturdy round table of headliners.

Of course, the beauty of Reading is that it has always kept the doors labelled taste and audience wide open; its guitar bands will always hold loyal, sturdy and true but it’s roll call of dance and hip-hop artists are just as credible. Aside from Disclosure’s chart friendly hits that have spun the meaning of house on its head in the UK alone, Reading 2014 has greeted the likes of MO, Netsky, Duke Dumont, Pendulum, The Glitch Mob, Lxury and Bondax to its tents. Fresh and exciting hip-hop talent also comes in the form of Batches and Cookies rapper Lizzo, Detroit’s most eccentric MC, Danny Brown, Joey Badass, Vic Mensa, Tempa T and Giggs.

The umbrella of “guitar music” is also a wide family tree of genres that people like to give silly names too, (B-Town anyone?), and no one knows this more than Reading. The main stages have the usual smattering of alternative acts including regulars Enter Shikari, Jake Bugg, a massive leg-up appearance from Peace, Macklemore & Ryan Lewis (?), Vampire Weekend and Foster The People. It’s the radar breaking acts that have pushed through the fodder that are really going to surprise this year though: buzz acts like The Wytches, Royal Blood, Eagulls, Fat White Family, Childhood, Amazing Snakeheads, Wolf Alice, The Orwells and Baby Strange have been dotted around from tent to tent with an almost certified slot for next year too if their rising adulation is anything to go by.

Match this with the NME tent, guilty of drawing in some of the biggest crowd pleasers with a variation of some of the world’s most exciting and entertaining acts. Gracing its stage are the likes of Drenge, big haired psych revivalists Temples, Warpaint and Manchester’s Courteeners. Cage The Elephant will also be joining alongside the soon to be massive Jungle, The Horrors, The 1975 and Ninja and Yo-Landi, otherwise known by their insane hip-hop act, Die Antwoord.

Of course, if you’re looking for a laugh after all the emotional pillaging then you could always head to the Alternative Stage to catch Bill Bailey, Simon Amstell and Chris Ramsey doing funny better than anyone else.

Why: Because it’s bloody Reading, that’s why.

Reading tickets have now sold out but weekend but day tickets are still available for Leeds: leedsfestival.com/tickets.

All words by Harley Cassidy. More work from Harley by checking out her Louder Than War Author’s Archive.