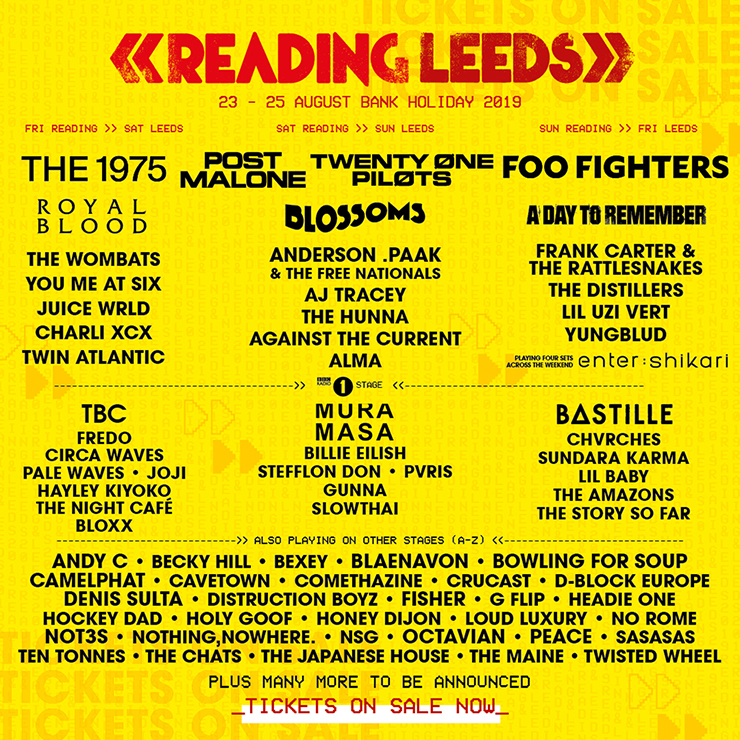 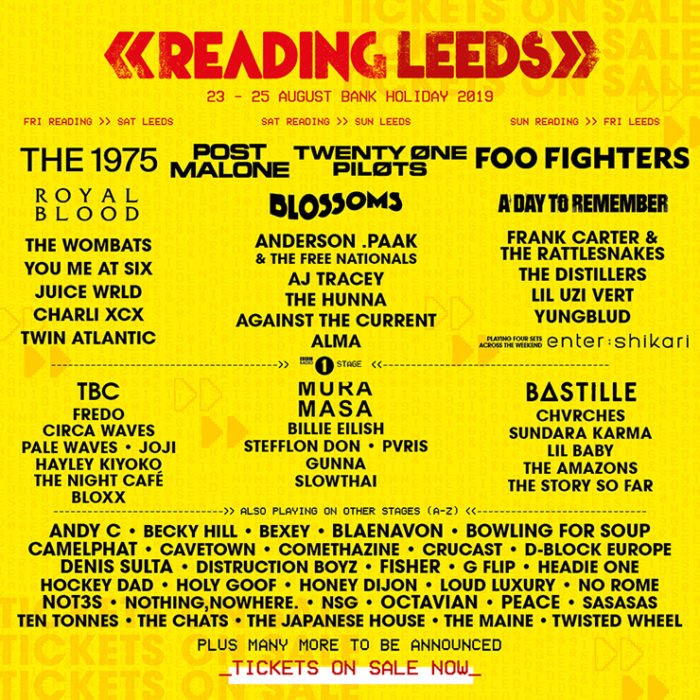 We’re super excited about this year’s Reading and Leeds Festival.

Foo Fighters, will make their triumphant return to headline Reading and Leeds in 2019. With nearly 30 million records sold, and fresh from packing out the world’s biggest venues – Dave Grohl, Taylor Hawkins, Nate Mendel, Chris Shiflett, Pat Smear and Rami Jaffee will bring their three-hour-plus rock marathon master class back to headlining Reading/Leeds, a tradition they began in 2002. Expect every one of the tens of thousands of voices in attendance to be raised with every deafening chorus as Foo Fighters run through dozens of classics spanning their massive catalogue, from their 1995 debut through 2017’s ‘Concrete and Gold’ which went to Number 1 in more than a dozen countries including the UK and US.

Grammy Award-Winning Twenty One Pilots (Ohioans Tyler Joseph and Josh Dun) will be bringing their incendiary live show to Reading and Leeds fresh off the back of their worldwide ‘Bandito’ tour and career-defining show’s at London’s Wembley Arena. The alternative, electro-rockers have inspired a global movement with their flair for dramatic spectacle and world-conquering ambition. The duo, now in their ‘Trench’ album era of their career, have seen fans become super fans and set the bar high for a new generation and definition of pop and rock crossover stars.

Making their Main Stage headline debut are The 1975. The Manchester four-piece have had a phenomenal rise to fame over the past few years, selling out shows across the world and releasing their critically acclaimed second album ‘I like it when you sleep, for you are so beautiful yet so unaware of it’, which debuted at Number 1 in the UK and the US. The album was also nominated for the Mercury Prize ‘Album of the Year’ and was the catalyst to their 2017 BRIT Award win for Best Group, sealing their status as international superstars.

Undoubtedly one of the hottest names in the world right now, Texan superstar Post Malone returns to headline Reading & Leeds on his second-ever appearance. ‘Posty’ has been on an unprecedented trajectory of success, this year drawing some of the biggest crowds over the entire festival weekend and is now the first act since Nirvana to go from afternoon to top of the bill with a sophomore album in consecutive years. Since being catapulted into fame, the post-modern pop star has had hit after hit including the inescapable ‘Better now’, ‘Psycho’ and the aptly named ‘Rockstar’ and is ready to claim the headliner status.

Other names we’re super excited about seeing include The Distillers, Frank Carter, Blossoms, Ghostemane and Royal Blood. The festival literally is filled to the max with a crazy amount of incredible music!