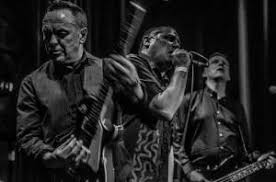 Airdrie garage punks Reaction are playing with The Membranes and The Twistettes on 9/12/17 in Glasgow at the ABC (all gig details are here) . Here the four hoarse-men of the poke-a-chips pick their favourite albums to give LTW a flavour of what to expect……

Reaction are currently recording the follow up to 2016’s critically acclaimed “Accelerator” debut album. Provisionally titled “Keep It Weird”, this second record promises to build on the garage-punk-americana-dub (yes, really!) of the debut and has producer Johnny Smillie from 90’s nearly-famous band Thrum at the controls. Having spent much of 2017 gigging, Reaction will bow the year out with what promises to be a special night with The Membranes and fellow Scots The Twistettes before a final show with Andy Blade of Eater at Broadcast on 19/12/17.

We asked the band members to give us three albums each that mean something to them and have influenced them. We thought it’d be more fun to make it albums that pertain to their particular instrument, so here we go with Reaction’s Dirty Dozen……

Third album by The Damned and their best i.m.o ..   The depth and variety of styles makes it a stand out album . It really brings out the personalities within the band and has a dark humour flowing throughout with an energy you can almost touch

Never heard nothing like it before it but a 1,000 imitators after …  the heavy rhythms and tribal beats are almost hypnotic . Add the vocals with apocalyptic lyrics and its a stone-cold classic.

Beastie Boys 2nd album and I love this because of the lyrics and interplay with the three vocalists . it’s hilarious at times with a dark side here and there. It was also first album that uses samples to the max and they really make the record. Every listen throws up something new and well ahead of the game were the Beastie Boys. These are three albums I will never tire of repeated listening .. love em to bits

It was originally my older brothers album and it was Noddy’s voice that caught my attention; plus the energy of the live sound, fuck is that what live music sounds like? Well, I was only 10 years old when I heard it.

After getting over ogling Debbie Harry which was a long time, I thought this was a brilliant album. The best track is “11:59” for me. My punk friends didn’t agree, plus the band had a secret weapon in Clem Burke. After listening to this album I really wanted to play drums.

This is another great live gig album except for the inclusion of “Johnny Was” which was added from another show. I learned how to play drums with this album, highly influential which I reckon you can hear in my drumming.

“The ideal is that the album won’t be recognisable as having come from any time, having been recorded in any particular year.  And the fact you’re working with acoustics, helps, means, you can’t date.” How right Mark Hollis was…this meditation on addiction, family, love, loss, faith, and hope remains as confusing, hard to grab hold of, warm, and beguiling, as the day it was released. His other comment on how music worked for him at this stage also resonates with me: “Before you play two notes, learn how to play one note, y’know. And that, it’s as simple as that really.  And don’t play one note unless you’ve got a reason to play it.”

Throwing Muses – House Tornado (1988, 4AD)
At age 16-17-18 and getting into indie, alternative, whatever…discovering Throwing Muses was a light bulb moment. It was rock, it wasn’t verse/chorus, it wasn’t boy meets girl, it wasn’t even 4/4 time…it confused me, and then drew me in. Kristin Hersh describes life through the lens of being bipolar, a geek, and very young – their first album was released when they were 17. Hookers, paganism, bad sex, joy rides, old bad ladies, swimming…it’s all in there if you listen closely enough

3. American Music Club – Mercury
Mark Eitzel remains my musical icon, and this is the best distillation of what he does…huge, passionate, elemental and yet he’s a self confessed loser who sucks and hates the sound of his own voice. The battle between talent, confidence, beauty and self loathing wins me over every time…the pathos reaches its peak on ‘Johnny Mathis’ Feet’ where our hero asks JM for advice on why he’s indie obscure and JM is a legend…

I could have picked L.A.M.F.but I’ve bumped on about that so much this month that I thought I’d pick something else. This album was rarely off of my turntable from around 1979 when it came out. I used to play along with it in my parents house with my amp cranked up; they loved it. No, really. I could, at one point, play this album note for note, I probably still could, come to think of it. The interplay between Thunders’ trademark sloppy guitar and Walter Lure’s intuitive playing remains one of my favourite things ever. And I normally don’t like live albums….

The earlier Gun Club albums are probably seen as more seminal, I guess, but this one has the might of Kid Congo Powers playing on it and that takes it in to my top three. I saw them at Strathclyde University around this time (I think they’d been on The Tube the night before) and the sheer visceral danger of Kid Congo’s playing blew me away that night. “Moonlight Motel” has to be one of the most powerful things ever. That slide guitar sounds like the end of the world.

Yet another great and influential album for me and that’s due largely to the legendary Rowland S. Howard on guitar. I saw the BP about a dozen times and they remain the only band that I’ve ever genuinely been scared of! I saw them for the first time at the Moonlight Club in West Hampstead and they were terrifyingly good, the real essence of The Stooges, Beefheart, free jazz and crazed rockabilly.Rowland was unmistakable with that stick-thin figure, the cigarette ash complexion-he was a quite beautiful creature- and that white Jaguar unleashing bursts of star-shell feedback and shimmering treble. It was that sound that drove The Birthday Party and despite “Junkyard” being seen as the seminal album, I reckon Rowland’s guitar playing on “Zoo Music Girl” and “King Ink” was  a huge influence on our songwriting, hence our new record being called “Keep It Weird”.