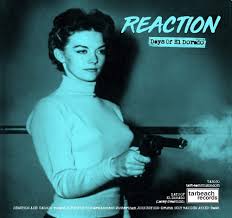 I’m on a mission at the moment hunting down old punk bands, finding exciting vinyl and this release has been pushed my way. An old skool double A side (pink vinyl!!) featuring an original punk band from Airdrie emerging 38 years later,  joined by New Zealand original punks Desperate Measures who can cook up a racket!

Reaction kick this off with a catchy number that will stay in your head for a while. It’s a great track that kicks off with a nice piano intro which builds into a rocking tune with some great riffs, a firm combination of vocals, drums and bass keep it moving up until the refrains of “El Dorado, where did the time go?” whilst retaining that solid standard of old punk rock. It’s all about getting fucked up on Airdrie’s answer to Buckfast which was El Dorado and having a good night out with the crew. This is a band who’ve been away and wanna have fun playing live without trying to impress the big boys. And what’s wrong with that? This is definitely a song you will have on your playlist for some time.

Desperate Measures kicks right in from the start. Rough sounding raw vocals reminiscent of Mark Arm (Mudhoney) or maybe Lemmy, threats of starting a race war in the USA, an obvious rant about Trump and racism in there. It crawls all over with those squalling guitar refrains and DC hardcore noise. They just wanna rock n roll and they do with this blast of a tune which all simmers down towards the end before Eugene blasts back into the raucous chorus “we’re just here to rock n roll.” Loud and kicking.

A nice little split single from two original punk bands that can still cut it and actually enjoy what they’re doing without trying too hard. It’s been out for a bit but worth discovering. Nice one!

Buy the single from here or here