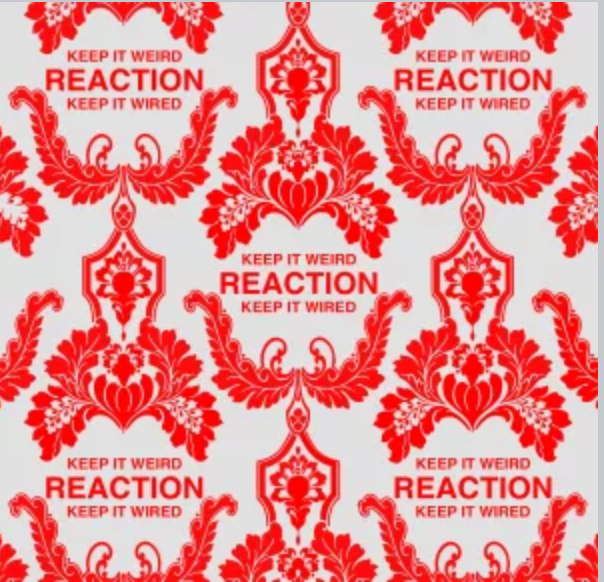 ‘Keep it Weird, Keep it Wired’

From the same Scottish punk rock classic melting pot as the late and great Heavy Drapes, Glasgow based and Airdrie bred Reaction are imbibed with the same spirit of eternal punk rock ’n’ roll. They even did a split single together with the Heavy Drapes back at the start of that much loved late band’s stint and Reaction’s Joe Whyte was a huge champion of the Drapes – pushing them through his duties of being fine rock n roll writer.

Reaction are students of the punk rock. They are immersed in that scientific strata of what makes the magic stuff tick honing it down to a perfection. This is a world of Sex Pistols riffola, Johnny Thunder’s swagger, The Damned’s anarchy chaos and destruction, the Stooges metallic KO, the New York Dolls lipstick kisses, Slaughter & The Dogs street glam,  the Ramones deceptively simple brat beating and the Sonics perfect garage rock.

Formed in the punk days Reaction have remained a defiant island against the onslaught of music culture, the many myriad waves that have crashed on the beach since the two 7’s clashed. There is something deeply admirable about this idea that in your life you find moment so perfect it stays with you forever but then you try and hone down this diamond to a new perfection. This is Reaction’s quest and one that their follow up album to 2016’s Accelerator has achieved.

This is a world that is dominated by classic. There is not a lot of room for manoeuvre and yet that is the reason why this really works. With no distractions and no eye on the main prize this is a world of dedication to perfecting the holy beat and after a few years of serious graft and gigs Reaction have made their classic.

Keep It Weird is an album of rock n roll perfection – full of huge riffs, glorious melodies and terrace choruses that even the most deaf will be swept along with and sing along to and yet it has flavours of all the other musics that have floated around in the ether since the brief moments of classic rock n roll and that’s the key – they have embraced all musics and remanded true to their powerful core.

To make classic rock n roll you have to have the smarts – the Ramones knew this – they may have been playing D.U.M.B. but they had an innate genius. They had studied the form and they immersed themselves inside it. Reaction have done the same in the rainy Glasgow streets. Every detail is covered from the switchblade guitar solos, the snarky vocal delivery, the love of the big tune, the rabble rousing celebration of the high decibel driven by Whyte’s riot guitar and Carson’s distinctive larynx and storytelling prose.

From the opening statement of intent, Welcome to Rust Town the band make a bold old-school statement about the real UK but with a poetry and passion that demolishes cliche with a song that is huge and empowering and has its melodic prowess underlined by stings of brass. This is an album that is about stuff, an album full of these nooks and crannies of lyrical smarts like on Valerie Solanos and Me which references the feminist would be assassin of Andy Warhol. There is a sensitivity and intelligence here and an opportunity to move punk along a bit without being dull and boring but with a dayglo explosion of ideas and action and even some glorious left field wonk on Saints of Tamla Hill.

This is a really a glorious releases – an explosive rock n roll riot where everyone is invited and a purist’s celebration of the form and the kind of album that could only be made by fanatics dreaming of rock n roll perfection and being artful Molotov cocktails surrounded by the grey days of growing up in Lanarkshire.

They have taken their purist punk template and then somehow managed to criss-cross it with a thrilling rush of ideas to flavour their muse and make their songs a long way away from the endless sludge of blokes plonking about on guitars in bands and somehow manage to make something truly special in the most oversubscribed of forms.