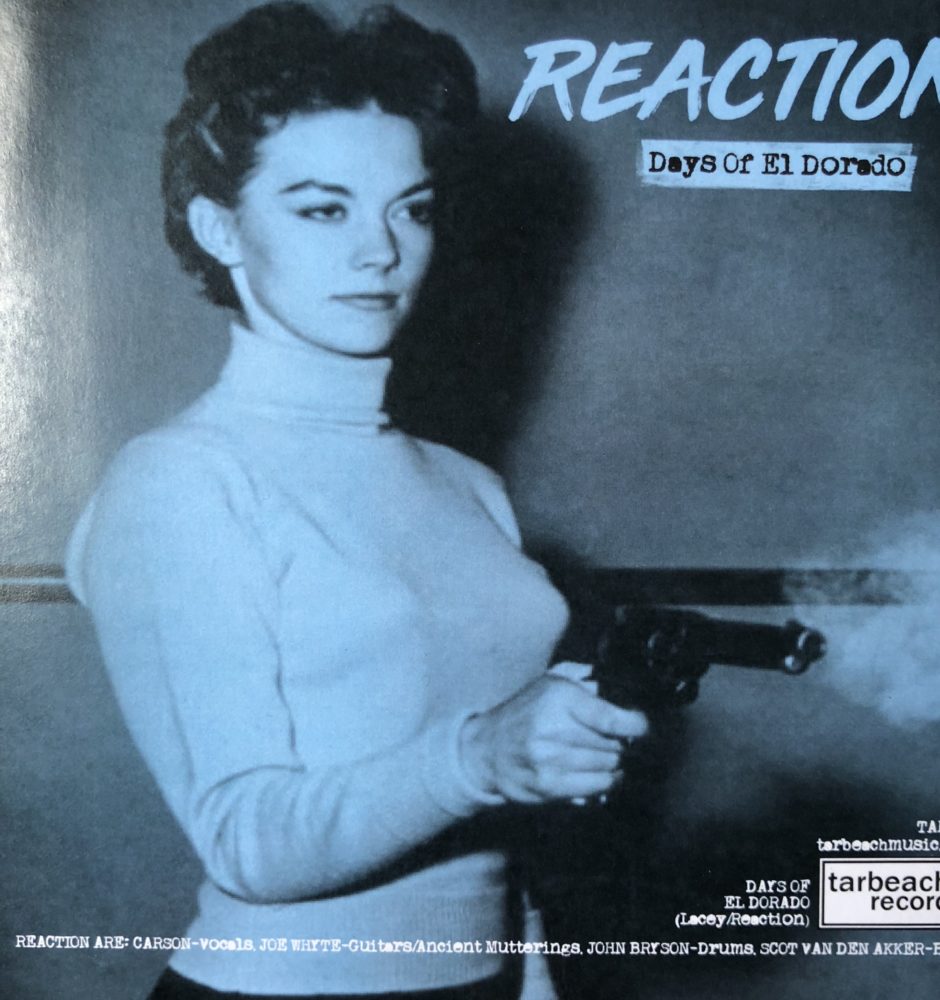 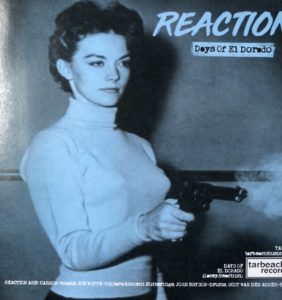 Another collector’s slab of shocking pink coloured vinyl on 7 inch. On one side a new song from Tarbeach regulars, Airdrie’s Reaction and New Zealand’s Desperate Measures, with Vive Le Rock’s Eugene Butcher, featuring on the AA. This is another Tarbeach release to savour and treasure.

Eldorado definition: the name of a fictitious country or city abounding in gold, formerly believed to exist somewhere in the region of the Orinoco and Amazon Rivers or more generally a place of great abundance.

Or in deepest Lanarkshire and Glasgow, a tonic wine to rival that other stalwart, Buckfast. A livener for many a youths weekend travails.

Eldorado – where did the time go? Either of the above definitions works for this song – being as it is a paean to days gone by, a lost youth when time seemed abundant – and so did the supplies of tonic wine. Or to lost weekends…

The sound on this track is distinctly different sound to the debut album but still undoubtedly has Joe’s unmistakable riffing, Carson’s warm distinct vocal and the tight, solid rhythm section from Scott and John. The music is as edgy as you would expect from the band who produced the mighty Accelerator, but with the added keys and backing vocals (courtesy of the talented Johnny Smillie of Thrum & countless other contributions to bands, including on one of my favourite albums of last year, Daniel Wylie’s Cosmic Rough Riders Scenery for Dreamers) the track sees the sound developing and adding elements of alt-country/Americana taking you in different directions.

There is a certain nostalgic feel to the song telling, as it does, a great tale in its lyrics.

“My Cuban heels are worn down, from marching all over town and I hear that you’re looking for me now. I’ll be in that bar you know, so bring the old gang in tow and we’ll raise a glass to the Days of Eldorado”

Engaging guitar hooks, the piano, drum and bass intro (no not that drum and bass, they haven’t changed that much) draws you in. The lush guitar melodies, backing harmonies complementing Carson’s passionate vocal, throbbing bass, crashing drums and cymbals and driving piano keep you engaged and have you reaching for the repeat button.

As a taster for the new album (along with other tracks that anyone seeing the band live will have been treated to), the bands sophomore release is going to be another stormer to complement the cracking debut Accelerator.

Desperate Measures entertain with their brand of punk rock on Executive Order.

As you may expect from the title, there is an element of vitriol aimed at a certain PUSA, and his policies and support from right wing extremists and racists. Their passion for the subject is apparent but while they raise their objections it certainly isn’t going to stop them doing what they came to do.

Kicking off at a rate of knots with no messing screeching garage punk guitars, pulsating bass rhythm and thumping drumbeats the band are certainly here for “kicking up a storm”. Having a gruff vocal to rival a certain Mr Kilmister, no-one is going to ignore Mr Butcher.

The band bring the tempo and volume down a bit for a rich and mellow instrumental break before Eugene brings the pace back up with a few yeah, yeah, yeah’s for one last passion-filled chorus.

Avoid disappointment, get your copy now from Tarbeach Records – Reactions new album Keep it Weird, Keep it Wired is also out now and coming soon in vinyl.