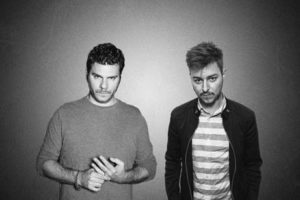 Louder Than War’s Ioan Humphreys gets the first exclusive listen to this exciting new project from a duo called RDTK and is suitably impressed.

RDTK is a collaboration that started fifteen years ago in a small one-bedroom apartment in Rio de Janeiro. It started as an outlet for two seventeen year olds to learn and abuse the intricacies of electronic production, composition and home recording. Its initial aim and objectives remain to this day: combining a hybrid of traditional rock instrumentation and arrangements with electronic programming, sound design and an intricate and sophisticated production style.

Lead single Seal the Chamber starts with a haunting piano which is followed by a gentle electronic throb and manipulated vocoder vocals.  A keyboard riff then starts to run throughout which is very reminiscent of The Exorcist theme tune. Very disconcerting! More noise and effects are added with vocals overlaid that come to a satisfying crescendo at the halfway mark.

Additional percussion is layered on and then the track really gets going. The 80s inspired Depeche Mode-esque vocalisation is ramped up and the drama and passion of the lyrics really come through and connect with the music.

The experimental electronica and layered on sounds is very effective and makes for quite a haunting and effecting piece of music. The final third has all the elements coming together to create a disco dissonance with heartfelt lyrics. There is lots going on in this 6 minutes plus opus that bodes well for the rest of the album. The single is theatrical and impassioned in equal measures as the vocals become progressively more pained and emotional. A very impressive debut.

The album Human Resources is released on 29th June via Denovali Records and marks the first official album by two friends playing together since the age of twelve. The album see the two separated by oceans and time, attempting to reconnect with the same collaborative, exploratory and enthusiastic spirit that they felt fifteen years prior.

Ricardo’s musical vocabulary draws as much from contemporary composition, drone, to techno and noise. Songs like album opener Affective Forecasting contain a mind blowing intensity which is often felt throughout Human Resources. Cinematic textures and progressive rhythms are the very essence of the record as we are invited in to the immersive sound world of RDTK.

There Is Still Time conjures up images of barren landscapes and dreamlike imagery, with a spine chilling tension that is a far-cry from the sounds of Samba and Bossa Nova, while the piercing strength of Surface and Together set against a back-drop of melancholy keys and krautrock electro beats offers a depth and urgency that is strikingly emotive.

Having studied composition at Berklee College of Music and the New England Conservatory, Donoso has participated in a slew of projects over the years, from new music/avant-metal visionaries Ehnahre to scoring for recent documentary features such as Greg Barker’s Homegrown: The Counter Terror Dilemma (HBO pictures 2016) and the Grand Prize short film winner in Brazilian cinema Casimiro Effect. T.K. has been playing and touring in major label signed rock bands throughout Latin America both as a bassist and singer.

As a solo recording artist, Donoso has released music on esteemed labels such as Denovali, Digitalis, Further Records and Hospital Productions, and continues to tour throughout Europe, Asia and Latin America. Outside RDTK, he continues to collaborate with film makers and video artists on commissions worldwide creating immersive environments and performances.

RDTK can be found via their label.