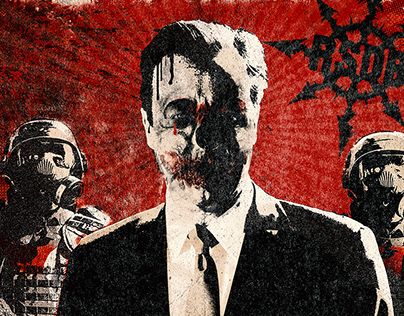 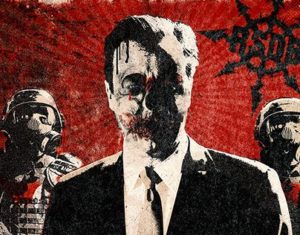 They’re back. And they’re even fucking angrier and heavier than before. Razor Sharp Death Blizzard. Here to kick your arse.  Joe Whyte reviews for LTW.

I reviewed RSDB’s debut EP a few months ago and pretty much raved about it. You can read that here.

I would have to say that thrash-anarcho-hardcore isn’t usually my thing but when it’s done as well as this (and with a huge slice of humour amongst the blitzkrieg of guitars and politicised lyrics) it’s pretty much irresistible. Razor Sharp Death Blizzard are from Hawick in the Scottish borders and are a collective that have seen members come and go over the last few years but have a settled core now and this, their debut album, is really quite something.

The album is a flurry of thunderous drumming, pummeling bass and cut-throat guitar; the vocals of Jamie Clark are murderous and unrestrained and the subject matter is in-your-face, take-no-prisoners and also, at times, rather darkly  funny. The other thing I should say that’s striking about  “You Will Burn” is that the cover art by Sam Hayles is perfect; it matches the mood of the music contained to a tee and is a breath of fetid air to coordinate with the imposing cannonade of power chords and shrieked vocals.

The opening (and title) track is a barrage of chunky chords and drum detonations. Guitars flame and bass-lines rumble as Clark’s sonorous voice calls down the urban blues. It’s controlled and sharp. It’s high in celerity and heavy as plutonium with it’s down-tuned guitars and whip-crack drumming.

“Right Wing Scum” is a song in two parts; the first a lead-heavy blast of prime-time thrash, the second a Discharge D-Beat style fusillade of anger and rage. It doesn’t stop to take any prisoners, either.

“Christian Sun” is another huge, powerful death machine of a song with Clark like a demented presence as he intones “baptized in the holy slaughter” as the band rail and rage around him. Safe to say, RSDB are unlikely to be soundtracking a Rom-Com anytime soon. “Rat In A Cage” starts with a chugging, bludgeoning riff and crunching double bass drum motif. The song’s time signature stutters and the guitar heads off into the ether like a chainsaw. “There Will Be Blood” is the only song herein that deigns to have such frippery as a guitar solo; the band tell me it was done in one take and that they actually worried whether it was “too much”! Said solo is an Eastern souk inspired thing that winds around the song like smoke.

With little creeping over the five minute mark (in fact, many of the songs are just over 2 minutes), You Will Burn is short, sharp and very much to the point. The bands anarcho credentials are never far from the lyrical content; RSDB say it like it is and if you don’t like it, well that’s tough. With this debut album they’ve laid down a daunting marker; few Scottish bands get near to this kind of fury and sheer velocity.

Razor Sharp Death Blizzard can be found on Facebook and on Bandcamp.