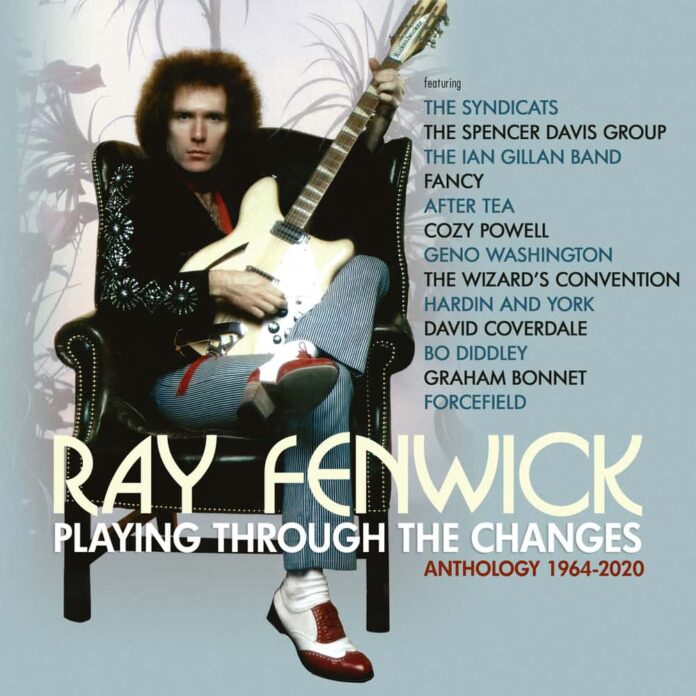 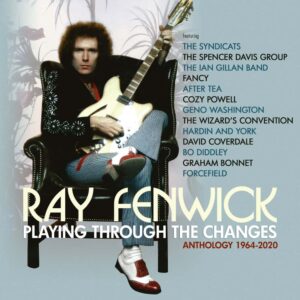 Ray Fenwick: Playing Through The Changes

Subtitled “The Anthology (1964-2020)” this 3CD set is a diverse selection which takes in hard rock, ska, nederbeat, TV theme tunes and freakbeat/mod, with the common link being guitarist/singer/songsmith Ray Fenwick. Bands that he was a part of, like The Spencer Davis Group, Tee-Set and The Ian Gillan Band all feature, along with rock & roll legends Bo Diddley and James Burton. Ian Canty meets rock’s own Zelig Mr Fenwick…

Playing Through The Changes covers a huge 54 years of musical activity from guitar ace Raymond John Fenwick. On examination, it is soon evident that he has kept himself pretty busy during that time in a wide variety of groups plus solo work. A precocious talent, he was only 15 years of age when he joined his first pro outfit, ska/r&b merchants Rupert And The Red Devils. Ray was also a dab hand with his own compositions from the word go, in addition to his six-string prowess. He wrote the Red Devils’ tune Everytime I Do, which is included here, an up-tempo and enjoyable slab of bluebeat.

He was soon on the move though. He struck up a friendship with Dutch guitarist Gerry Rameyn on The Red Devils’ European jaunts and along with two others from that band they formed the short-lived combo The Riot Act. On returning to England Fenwick became part of The Excels, who enjoyed a season on The French Rivera with Brigitte Bardot among their fans. Fenwick’s itchy feet meant from there in 1965 he joined up with a more established outfit, The Syndicats, replacing Steve Howe who was bound for The In Crowd.

Ray wrote and played on the band’s final single, which was produced by maverick Joe Meek at his Holloway Road studio. Their cover of Leiber And Stoller’s On The Horizon made no headway at the time. But in the intervening years the blistering flip Crawdaddy Simone (which is included on disc one of this set), penned by Fenwick and Jeff Williams, has gone on to be regarded as something of the mid-60s classic. Ray’s guitar on this song is crucial to its enhanced reputation today and it has become a popular cover for neo-garage/freakbeat bands.

Even at this relatively early stage, it is clear that Ray was not someone to hang around in any one group for a stretch of time, so it wasn’t long before he was on his merry way again. With his mate Rameyn recommending him, he became part of successful Dutch soul/beat outfit Tee-Set. Another brief stay yielded a couple of single tracks (unfortunately they’re represented by a rather limp re-recording of Don’t You Leave on Playing…), before Ray and some of the players broke off to emerge as psychedelic spin-off act After Tea. They crop up here with a cool live take of Long Ago.

Before too long, in 1967, Ray was enlisted into the then Winwood-less Spencer Davis Group, who cut a sitar-enhanced version of After Tea’s self-named Dutch hit. This tune shows up on disc one of Playing Through The Changes alongside two other SDG gems, excellent snotty rocker The Screw and Hardin/Davis wonder Mr Second Hand, which comes with some fine and furious Hammond. They also show up later on disc three with the great late-freakbeat/r&b wonder Letters From Edith, again proving what a fine outfit they were during this later stage.

In 1971, Ray Fenwick began to branch out with his own solo work. He released his debut album Keep America Beautiful, Get A Haircut in the same year. The urgent and damn funky Stateside (on disc three of this set) is the highlight for me, nimbly going through separate phases in its running time. As was the norm for him, concurrently he was also teaming up with old bandmate Eddie Hardin in Hardin & York in one of his many projects in a busy year. They feature with the prog-pop goodness of Have Mercy Woman on disc two.

Around the same time, along with Spencer Davis and Eddie Hardin, Ray wrote and recorded the theme tune of ITV’s version of Blue Peter, Magpie. Issued as a single under the group name The Murgatroyd Band, it wasn’t a hit, but it is arguably one of the most evocative pieces of music of the period in the UK.

A few years down the line, Ray joined The Ian Gillan Band, a boogie rock aggregation that existed prior to Gillan’s more successful heavy rock tenure with Virgin Records. The best of their efforts here is a gritty and soulful Country Lights, which shows up on disc three of this set. Fenwick also paired up with Roger Glover in 1974 for the charming Love Is All single, with Ronnie Dio on vocals and White Lightning, Ray’s late 1970s act, even appear to make a stab at new wave on a bright and snappy Mail Box.

An unexpected development in Ray Fenwick’s career occurred in 1980 when, having originally started his recording adventures with a ska song back in the 1960s, on a small scale he returned to the style at the time of the ska revival. He played a role in both The South Coast Ska Stars and Tich Turner’s Escalator, who provide the brassy and yob vocal-enhanced Are You Wiv?. The latter part of the decade found him as a member of Forcefield, who here retread a couple of rock classics here rather aimlessly and also their own, marginally better, MOR number Hit And Run.

On disc three Ray teams up with Elvis Presley’s guitarist of choice James Burton, an original inspiration for Fenwick when he took up the guitar, on a spirited Milk Cow Blues and also a 1973 session with Bo Diddley provides Don’t Want No Lyin’ Woman, which is chockful of attitude and soul power. As the years went on Ray racked up a large amount of time on session work and various projects, many of which are present here. The last track of this set is the spacy exploration of We Persuade Ourselves We Are Immortal, an item he recorded with The Amorphous Androgynous, The Future Sound Of London’s psychedelic alias. This goes to show Fenwick, to his great credit, hasn’t stopped going forward even so many years on.

This compilation zooms crazily all over the place with scant regard for both sound and chronology. Perhaps it could have benefitted from at least adhering to the latter, as this makes for what is sometimes a sketchy listening experience. But that I suppose does reflect Ray Fenwick’s every-changing, non-stop journey from ska to beat to psych to heavy rock and back again, with all points in between buzzed through.

At times the haphazard nature of Playing Through The Changes did weary me a little and also the fact is that some of the 1980’s tracks haven’t worn too well does slightly mar this set. There are also quite a few numbers that are well played and sang which are pleasant enough, but not really memorable.

But this is made up for by some unexpected delights. For example, the lovely work Ray did as part of The Purple Aces with Geno Washington in the 1990s, with The Blues Walks With Me on disc two a high-quality cut and Rowdy, a band featuring Billy Bremner that sounds as Rockpile as it is possible to be without actually having Dave Edmunds on speed dial. They impress on the truly rockin’ High Class Baby. Ray’s myriad of 60’s and 70’s bands, in particular The Spencer Davis Group, deliver here on the whole too. Playing Through The Changes acts as a document of a busy career running the gamut of a number of styles and also has some great individual tracks. Together it forms a fitting testament to Ray Fenwick’s restless talent.