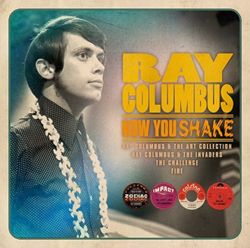 Best of the 60s output of New Zealand legend Ray Columbus, famous for “She’s A Mod” and the Psych classic “Kick Me”

For a relatively small country New Zealand has more than held its own in the popular music stakes. The great bands from the Flying Nun label like the Chills and the Clean, before them the Punk bands that featured on the “AK47” comp such as Toy Love and the Swingers and in the early 70s the proto-new wave of Split Enz. But delving even further back to the dawn of beat Ray Columbus and the Invaders made a massive impact on the Australasian rock scene from their humble beginnings in the city of Christchurch…….

After a spell of local fame they started touring round the larger cities in NZ and immediately set a buzz everywhere they went – their ultra-tough rhythm and blues and wild live show set most rival bands back to their drawing boards. After acting as support act for many major bands touring NZ it was inevitable they would record but no-one could have expected the impact the results of that session would have.

“She’s A Mod” is a frantic beat offering, exactly the kind of number that has one imagining bright young ravers grooving wildly to while bemused old duffers watching nearby removed their flat caps, scratched their bald pates and pondered what was happening with this new-fangled “modern world”. It was a massive success “down under” and hit number one is Australia just as Ray and the Invaders arrived there to support Oz legends Billy Thorpe and the Aztecs in an ill-fated tour (the Invaders got carried away with the wild reaction they received and encored their hit song over and over again whilst the headliners pulled their hair out stage right – this led to the top chart band in the country being stranded and penniless for a brief time).

The Invaders recordings represented here are tough but tuneful versions of the sound of 63, but they are much rougher (in a
good way) than the likes of Gerry and the Pacemakers were supplying. The odd ballad is here (the genius cover of “Til We Kissed”) but in the main its titanic Rock n Roll filtered through a sixties gauze. Columbus had a big voice and could easy carry the material they had (moody blues numbers like “I’m Finding Out” and out and out rockers such as “YoYo”) and the Invaders were the perfect rowdy backing band.

Times changed and seeking success further afield Columbus decided to dispense with his group and try his luck in the USA, cue hackneyed “Columbus discovers America” quips in the press (presumably followed by Basil Brush going “Boom, boom”).
In LA he recorded a song about the City of Angels a decade and a half before X and took in the emergent scene, though his early recordings in the US including a remodelling of “Shes A Mod” seemed to hark back to the earlier beat days.

Coming up to speed with a start in 1967 with the help of the Art Collection (Anglo-Freakbeat sensations also known as Powder – amazingly they played some live dates in the UK last year!), Ray’s next waxing was the incredible “Kick Me” – a true Psychedelic Punk classic (a second slightly more boisterous version is included at the end of this CD). Sadly, though touring with the AC no more recordings were made as the Collection got disillusioned so after that vital single they went their separate ways.

Ray’s later recordings touched on more on Soul (particularly “I’m Good For You” recorded with Fire, but this seems not to be the “Father’s Name Is Dad” pre-Strawbs band) and Pop and bore some resemblance to the offerings of the time by similar grandstanding vocalists like Tony Christie and even Tom Jones, but the instrumentation is always decidedly more “wigged out” than either of these middle of the road style singers. “Travelling Singing Man” is a good example of this, though the grungy guitar and effects always keep Ray far from the supper club and more “out there”.

After this tumultuous period in the sixties Ray went on to present television and manage popular New Zealand band Zed. Last time I heard he was very ill so this collection of his best stuff I hope serves as a tonic of some sorts for him – it’s an excellent compilation and time capsule that spans many styles but always with verve.