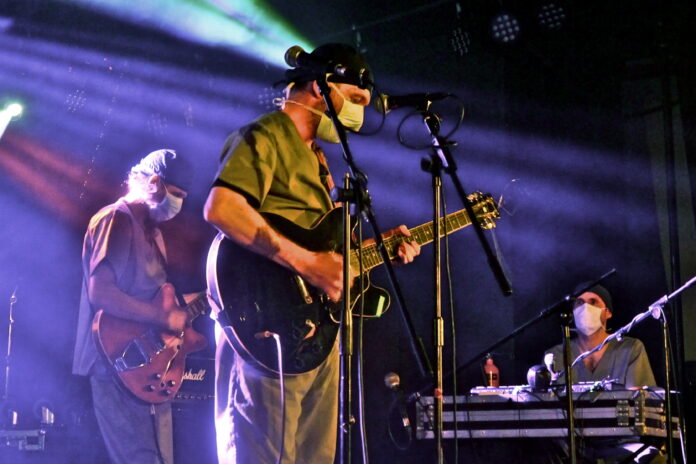 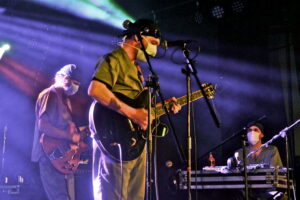 A room thick with fans dancing and headbanging intermittently at a riff’s notice would suggest Clinic the final act of Raw Power’s opening night, are the real reason for anyone showing up at all on this disappointingly damp August evening.

Having withstood the Sonic Youth-cum-Slowdive tidal wave of noise brought by Wiltshire three-piece Thought Forms, as well as the fuzzy, forthright psychedelia of The Oscillation (soon to be found at Reverence Festival), the altogether wackier and weirdly sinister force of four middle-aged men in surgeons’ gear is now freaking out early attendees of this brave new addition to Britain’s already ballooning festival calendar.

The bill, curtailed somewhat on the Friday (presumably to save people skiving off work), is uncompromisingly obscure. The most well-known act would appear to be London via Japan’s Bo Ningen, and even that seems largely due to them having collaborated with the excellent Savages (who themselves are no chart-toppers in any case). It’s in this context that bands who elsewhere would maybe struggle to maintain a crowd are looked upon with unflinching adoration by committed acidheads.

An exception is found the following day, however, in lone signings of the Louder Than War label Evil Blizzard, whose bizarre, horrifying GWAR-esque theatrics would be Clockwork Orange clamps to the eyes of anyone merely curious enough to look up. Their set is an exhibition of something far beyond music (incidentally a thrilling blend of early metal and post-punk) with costume changes, PA scaling and quite literal audience participation – two of their four bass guitars are shared with spectators, one of whom gleefully jams along to closer Whalebomb as if auditioning for membership.

Later, Teeth Of The Sea prove to be nothing short of a revelation. Having sampled their work via the odd MP3 or YouTube clip and feeling little but confusion and indifference, I’m shocked to find their strange mix of trumpet loops and myriad electronics one of the most engaging sounds of the whole festival. Unique, immersive, powerful stuff.

Flamingods too are one of the weekend’s major assets, their enthralling fusion of psych-rock and (for want of a better word) world music trumping the current incarnation of headliners Acid Mothers Temple. Speaking admittedly as someone largely unfamiliar with their recorded output, the latter give not so much a performance as a patience-testing demonstration of just how much you really really have to like psychedelia and all it encompasses to fully justify Raw Power’s entry fee. 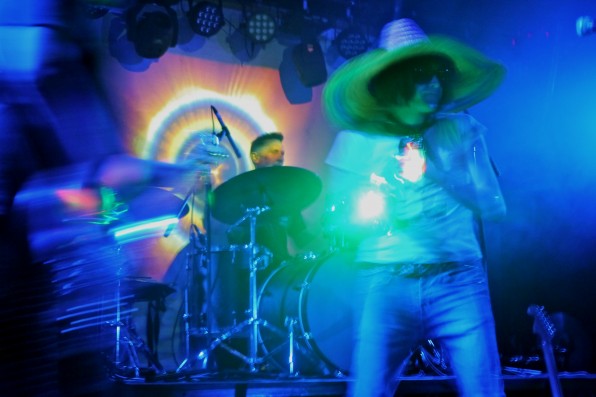 Sunday sees recently reformed John Peel sessionists Terminal Cheesecake rattle a few eyeballs, with about twelve times as many lights as songs on display. Despite twenty-five years having passed since releasing their first record and a change of vocalist, their sound is as bold and otherworldly as it ever was, and appears to reel in a few new fans too young to have caught it first time round.

Meanwhile, Dublin’s Girl Band (who are in actuality four young men) are the last to play the downstairs stage in the Boston Arms’ back room. They give it an appropriately ear-shattering send off, with strident, noisy outings of singles Lawman and De Bom Bom, as well as a bizarre but brilliant, faithful in running time only, cover of Beat Happening’s I Love You. 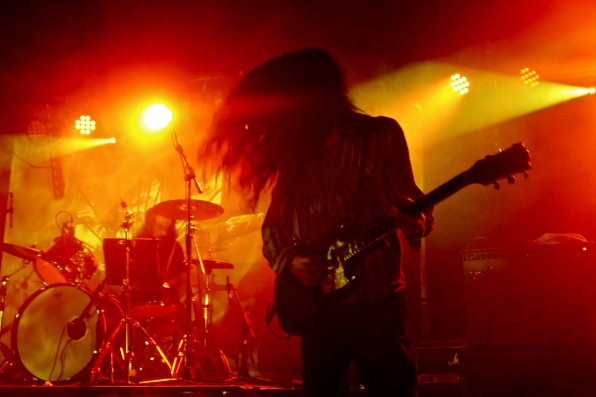 Upstairs, the hair-raising antics of Bo Ningen are responsible for bringing the weekend to its rightfully frantic, mind-melting close. The Japanese four-piece are one of those acts that simply nothing can prepare you for; the volatile mosh pit that forms from single Henkan onwards seems, considering the average age of those within it, more an involuntary reaction than any conscious expression of appreciation. Their set encompasses the bulk of what a festival named something as black-and-white as Raw Power would profess to be: loud, raucous, uncommodified and aversely so.

Rarely do you get the impression at festivals that everybody there is there primarily for the music. Granted, the setting of a north London pub/gig venue is hardly conducive to 24-hour sessions of getting lashed in a field while documenting the entire event on Instagram. But even so, it’s to the infinite credit of promoters Baba Yaga’s Hut that they appear to have struck upon a gap in the festival market that nobody even thought existed. Here’s hoping it returns next year to unite and deafen us all once again.