Generally, a band has a collective visual identity ”â€œ you will see everything from The Residents collective disguise of their identity which in-turn became their own visual trademark, to the dungaree clad Dexy’s and the be-suited Godfathers and beyond.

Clearly nobody bothered to tell Liverpool based Raw Bones, or if they did no-one was listening ”â€œ this ramshackle bunch of misfits clambered onto the Mello Mello stage to open the recent Free Rock ”Ëœn’ Roll Festival in Liverpool; dreadlocked front man Bazzy Dave, backed by guitarist Danny, the most unlikely hook slinger ever seen, Rex onÃ‚Â guitar looking like a English country gent in an exquisite tweed suit, Phil Hartley slapping a bass hog and Bongo Mark crouched over his Cajon drum ”â€œ the sound that Raw Bones create is perhaps best imagined as a car crash, but the car involved was a 59′ Dodge with The Trashmen playing on the stereo; its primitive and organic, its stripped bare, just the essentials.

Opening with Cro-Magnon’ and it’s clear that Raw Bones are set to deliver another blistering set ”â€œ akin to the sound of a creature that has crawled from the primordial slime, raised its head and spat the residual gloop from its mouth. Raw Bones pilfer riffs from the past 50 years of rock’n’roll, Ronnie Cook & The Gaylads Goo Goo Muck’ becomes ”ËœMore Gravy’ which has just been released as a mini CD on the bands own Bonesman Records. Twenty five minutes later, having walked roughshod over the sanctity of rock ‘n’ roll we took the opportunity to chat to frontman Bazzy Dave.

LTW: I was particularly taken with your comment immediately after your recent Basement 20 gig when I described the band’s sound as being primitive, you responded by stating “Were taking this back to the Cro-Magnon era”Â…Is that the ethos of the band, the name itself indicates as much; watching and listening to Raw Bones it’s apparent that you are attempting to strip away all the unnecessary crap linked to much current music…

BD: Stripped down is what it is…Nothing to interfere with the tune too much. Using basic instrument sounds. There’s no need to understand much about music to enjoy a basic tune.

LTW: You have somewhat lazily been compared to The Cramps; I guess opening your set with a mangled cover of Buddy Holly’s ”ËœRave On’ will lead to this sort of comparison… I think there is a link in that you are drawing inspiration from the same era, but Raw Bones seem intent on interpreting these influences as opposed to paying homage…

BD: We LOVE the Cramp’s and rare tracks from the past should be heard we reckon.

LTW: How did the band come together; I recognise a couple of the faces ”â€œ Liverpool has always had an incestuous music scene, so who have you got?

BD: It started with Vince, and Dave three plus years ago, then Jim on double bass, Brengun and Carl (Urban Strawberry Lunch) on box drums and then stayed that way for ages. Marko Bongo joined a year and a half ago, and the current line up is well… flexible! We have a rehearsing core of five, and regular members join us as and when they can, as they are in other bands it’s not possible to fix a line-up; at the moment we look like – Basketball Dave (vocals), Vince Vine (guitar & vocals), Marko Bongo (cajon), Rex Monday (bass), Phil Hartley (Dbl bass &vocals ”â€œ also in Space), Ben Fingerbone (cajon ”â€œ also in Zombina & The Skeletones, El Toro, and currently Longfinger Bandits), T-bone (toms ”â€œ also in Dead Class & Vermin Suicides) and lastly Al Jones (cajon ”â€œ also in Space) 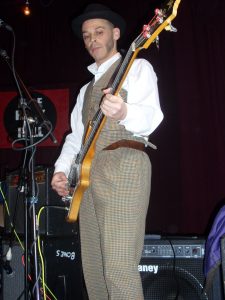 But then there are the guests!! We have our own all girl soul review on harmonies ”â€œ The Ribettes; which is a mishmash combination of some or all of ; Roxie Moon Unit, Kitty Ford (also in Pete Bentham & The Dinner Ladies), Jezebel Freya Halewood Leagas, Jessica West and others have made guest appearances…

LTW: I guess it was a conscious decision to go with the double Cajon drummers ”â€œ that has to be integral to the idea of no excess…

BD: Indeed it is… we have no set number of drummers, though. Marco Bongo is the main one. We’ve just finished recording Psycho Micro last week ”â€œ we had 4 drummers. The energy of bare hands on drums seemed logical ”â€œall you’ve really got left must be something like when the earliest people started beating out rhythms. Also, we started in Vince’s kitchen so there wasn’t room and drum kits are harder to transport and set up, anyway.

LTW: Each time I have seen you it’s the very visceral nature of your sound that elevates the band above all others

BD: bloody hell mate, you tryin to get us battered! Dunno about elevate”â€œbut it seems like the intellect can take a rest if the tune flows without much fancy adornment.

LTW: There is honesty to the band; that said there is nowhere to hide, there’s no effects, no guitar solos ”â€œ people do seem to react to that… What has been the reaction up to now?

BD: Folks seem to like it. Bonesmen don’t have to fret much about technical stuff and effects to enjoy a good bash, and the sound s of the early records we like didn’t use them either. The 50’s was the first time a youth hit mushroomed via the double edged sword of mass media, paving the way for such homemade joys as garage, punk and rave ”â€œ damn fine fun; see no reason not to carry on in that vein. 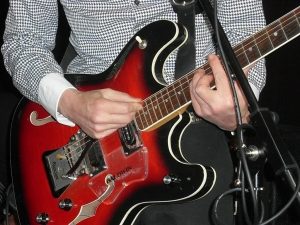 LTW: What’s the creative process behind a Raw Bones song?

BD: Up to now Vince has come with words and starting tune. Bazzy D helps, he’s co author of the groove! The core four get it together, other members learn, and then Phil adds a cherry on top. Most tunes are stolen ”â€œ we are not giving them back ”â€œ so they are ours now.

LTW Is there a political side to the band ”â€œ were not talking left/right etc ”â€œ has Raw Bones got a message?

BD: Please have fun when you can. Vince and Dave have fun with minimum modern techno interference. All the bones are different (except one).