Home Music Reviews Album Reviews Rats From a Sinking Ship (with Markus Kienzl): We Are Heathen –... 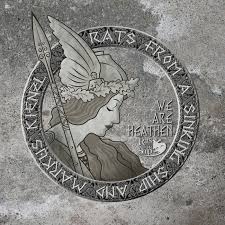 Rats from a Sinking Ship – We Are Heathen

As we enter silly season in the world of UK politics in the run up to the hastily arranged General Election, Rats from a Sinking Ship team up with previous Lusty collaborator, Sofa Surfer’s Markus Kienzl, to unleash their own blistering manifesto. Unlike the dysfunctional world of Westminster politics in which there seems to be a lack of direction and clarity, Rats know exactly what they want to say.

The core of Rats from a Sinking Ship has always been the dynamic duo. The prolific Alex Lusty on rapping/vocal duties with trusty sidekick Jamie Price on electric guitar. Having Kienzl guest on this, their fourth album, is an inspired and most welcome addition. His beats, loops and samples adding layers of interesting textures. Not being a band who stand still, the sound on Heathen is somehow fresh and new. The familiar signature Rats rock/punk/rap crossover is present. However, to these ears, the production and sound is sharply crisp and clear. A vigorously refreshing and pure sound. The slick glossy production giving Lusty’s vocals the platform they deserve.

As a major part of the glorious racket the band make, I can’t pass up the opportunity to comment on Jamie’s guitar riffs. It appears he has consciously ramped things up a few notches here. There is a sparkling vitality to his cutting and incisive guitar lines that add a dangerous edginess to the overall package.

Preceding this release with the superb single Looney Left, featuring inspirational poet and activist Benjamin Zephaniah, was a genius move. The song hits out at the right-wing media and commentators who attach “that” label to anyone who has principles and values that don’t match their own. There can be no doubt where the bands allegiances and belief system lie, and it sets out the agenda perfectly for the album.

We Are at War

As such, the left leaning band don’t miss their targets. “We are at war” the sample warns, as the album kicks off literally with a Diatribe, Lusty picking his subjects carefully. The dystopian direction the world seems to be heading in this current political climate ensures there are plenty of marks for them to set their sights on. Lusty ensures not one of them is missed. Perhaps the analogy here is remiss of me, given the target of the albums final assault on Monkey Gun.

The right wing is in for a battering throughout. Politicians, the press, the US president, no-one is safe. Self-proclaimed persecuted individuals who parade themselves as “journalists”, yes you Yaxley-Lennon, fascism in all its forms. Though not mentioned by name, there is an implication of the disappointment felt by Lusty towards one of his own musical inspirations, a certain Stephen Patrick Morrissey, due to his recent outbursts and political leanings.

There are many confrontational moments on the album, that reflect the times we live in. Lock Horns is a vital and energised example of this. Its manic introduction sampling Jim Jones “I’ll fight, I’ll fight – oh, I will fight…” instilling a frantic energy. The pace shifts down on a few gears on the effectively understated Change is Coming, no less powerful for its more lowkey vibe.

No strangers to denigration and scorn from various fronts, Rats are up for the fight in their penultimate album track. On Rats Never Sink, they speak out against their critics and those who seek to ridicule their message and silence them.

Don’t just take my word for it, go out get this album and hear the manifesto for yourself. Whether you are political or not, don’t accept the status quo. As That Petrol Emotion once said; agitate, educate, organise. “Just ‘cause they say that’s how it is, don’t think that’s how you should live”

Rats From a Sinking Ship – shop