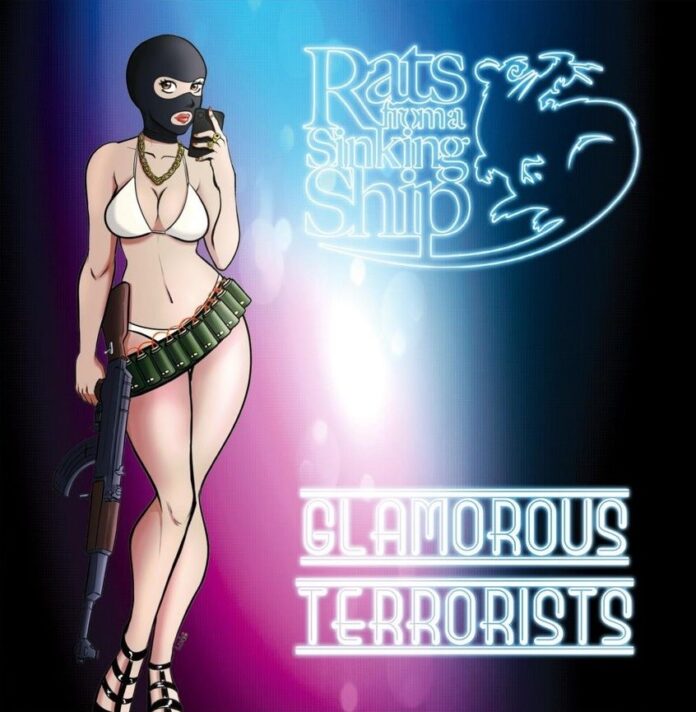 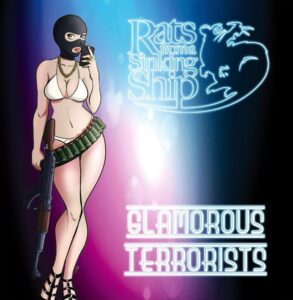 Not only does these Rats never sink, they don’t sit still for long. Following hot on the heels of an EP released during lockdown featuring an appropriate cover of Del Amitri’s Nothing Ever Happens and within a year of their last album We Are Heathen, Rats From a Sinking Ship launch their new album Glamorous Terrorists on Halloween.

The last album was a collaboration with Markus Kienzl and saw a slight change in the direction of the band’s sound as a result of his beats, loops and samples. Glamorous Terrorists sees the Rats return to the sound we have all been used to since their debut Rise as One. Gritty and grungy with crunching punk/metal guitars and several songs with a heavy dose of venom directed at certain targets in the lyrics.

They certainly know how to choose their times for releasing albums. Last year it was in the run up to a hastily convened General Election, this year it is on the eve of a US election which could conceivably see Trump in office for another 4 years. Interestingly, there aren’t too many direct hits towards the PUSA. Possibly because there is no need to point out his obvious failings. There are plenty of songs that do point a finger at the types that follow Trump and his likes, the type of individuals that seem to be on the rise across social media.

Now I am Become Death

The album opens with Oppenheimer’s famous quote “Now I am become Death, the destroyer of worlds” which kind of sets the tone for the album, but also for the current world climate in 2020. The quote gives way to a thunderous drum roll overlaid with heavy riffing, the song title “Give Roses to the Living” referring to the grief culture that has grown exponentially over the years since the death of Diana. From Oppenheimer to Zimmerman. The gruff hoary rasp of Bob Dylan introduces The Loneliest Man in Rock, a public service announcement with guitars warning of the pitfalls of a career in music.

We all love a good list song, don’t we? Lewis Collins as Bodie is a head rush of memories for people of a certain age. Kicking off with Lusty singing the famous line from the start of the A Team as Jamie paraphrases the theme tune on his weapon of choice. Jamie’s omniscient guitar line reacting to the lyrics as we get snippets of the likes Rocky and Iron Maiden as Lusty runs through his lists.  There are some wow moments as you remember things from your youth that you’d forgotten about and other moments in time you wish you had never experienced, Thatcher’s Britain, Hillsborough and the fear that pervaded your life for months (years!) after watching Threads.

The first single released from the album was Wuhan Calling (watch the video below). There is no need to explain where the inspiration for the lyrics for this one came from. The structure of the lyrics here is based on the similarly named classic from The Clash.

Lusty directs his anger and ire at several targets on the album, perhaps most deservingly in the current times on Dedicated Follower of Fascism. I, like many others, have been whittling down my “friends” list on social media in recent months with the number of racist, xenophobic, homophobic, sexist meatheads who are coming out of the woodwork. Most recently I was shocked by the number of “fans” of The Specials who spouted ugly diatribes on their page after they posted about their song BLM. This coming from people who purport to follow a band that is part of the two-tone movement. Unbelievable.

This Rats song hits out at these types, pulling no punches, Jamie’s guitar work on this album being among the strongest of all the Rats albums. Lusty targets holocaust deniers and Blood and Honour among others. Unfortunately, as the lyrics suggest, we all know of at least one of these people…

Elsewhere you’ve got The Price of Freedom is Not Free making comment on the state of 21st century Brexit Britain, Bastards Lament taking on more of a hip hop/funky drummer feel and the album’s closing track, an ode to toxic relationships, Death to the Ex, with its eerie instrumentation building into some mouth-watering riffage.

Rats are known for an interesting line in cover versions, the aforementioned Del Amitri one, Iron Maiden’s Run to the Hills and Lusty’s much loved Half Man Half Biscuit and their classic Trumpton Riots. (Fact fans – both Iron Maiden (Live After Death) and HMHB’s Dukla Prague Away Kit is referenced in Lewis Collins as Bodie) Anyway, their penchant for an interesting cover continues here with, wait for it, Girls Aloud and their number 2 smash, No Good Advice. Almost unrecognisable, it was only when it got to the chorus, I realised what song it was. Love it.

For me, the penultimate track on the album, Out in the Woods Where She Finds Peace, is the most powerful. And I don’t mean that in an in your face guitar and a spat out lyric manner, I mean in the power of the lyrics and the story told in the song and the atmospheric arrangement. This song is based on a real-life story and tragic suicide of someone close to Alex. The first half is backed with lamenting piano and string squalls, the lack of guitar makes it all the more powerful. As the story reaches its climax the full band kicks in for its dramatic clamouring conclusion including some sympathetic licks and riffs from Jamie. Be kind to others, you don’t know anything about their internal struggles.

Get the album from Rats From a Sinking Ship website