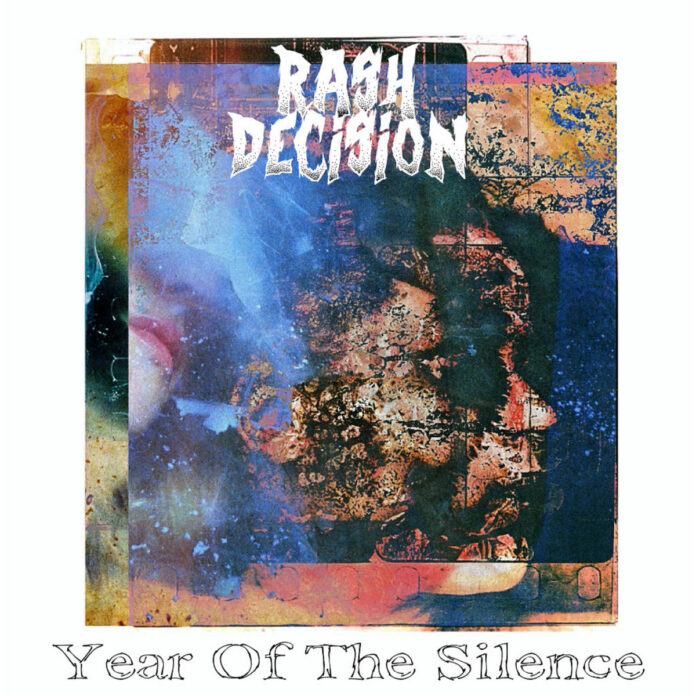 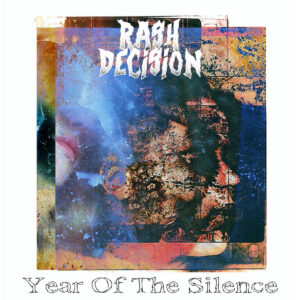 Rash Decision – Year of The Silence (Dead Invoices Records + 11 others)

The latest album from Rash Decision was written during the lockdown – Year Of The Silence.  Inevitably this is one of the issues of the day that inspired their angry lyrics, but they still manage to inject some humour into this collection of hardcore songs with the odd metal twist.

Lockdown meant different things to different people. For a few it meant a hectic schedule of cheese and wine “work events”. For most of us it meant isolation and discombobulation from our family, social circles and live music -it was Year Of The Silence.

For Rash Decision it meant a stop to their gruelling touring schedule – and they usually cover a LOT of miles! It also provided time for them to write a new album, despite the fact at least one member of the band was still working his bollocks off for the NHS. And this is the result.

Driven by punishing drums and a rattling pinging bass with a duelling twin guitar attack the Rash vocals range between New Yawk Hardcore style shouting to a guttural zombie pirate drawl. And there are plenty of crew vocals – youth crew or pirate crew, you decide. It’s not music for the faint hearted, me hearties.

For the most part the Rash Decision machine is high octane hardcore with some cheeky metal licks and damping that gives a bit of a crossover flavour.  Breakdowns, drop outs and slow build ups always come back to the full gallop.

Lyrically, the album is reflective of the times in which it was written.

For example, Graveyard Upside Down provides an honest insight into the mind of hard working health workers in the middle of the pandemic when faced with ineptitude and corruption at cabinet level:

“I wonder what’s really going on, inside their heads and how little they value us.
What are we to them? But coins and clowns, an excuse to be heartless.
I wonder how they sleep at night? they laugh at the body count, does it really get them off?
They know what they’re doing and they’re laughing to the bank”

This theme about how workers are under valued reappears later in Sarcaustic: “Attack on the working classes. Keyworker safe? Fuck the masses”.

Rash Decision have no truck with fascism. War You Won’t Believe takes a look at the rise of redneck far right in the last few years across the pond. Meanwhile, in a similar vein, Beasts of England takes its name from the anthem of George Orwell’s Animal Farm

I know I’ve seen Holiday In Cambornia performed live when gigs first opened up because you don’t forget a title like that. The frustrations of Cornish Little Englanders (or are they Little Cornwallers?) are clear “700 million bucks per annum ploughed into Cornwall by the EU. Fucking thrown away by the Brexit morons. Severing their own racist throats”. Prodigal Son tells of breaking this cycle of hate within a family context.

Rash Decision aren’t just angry about shit though. They also like to indulge in idocy and laugh at life a little. For example, Tale of Two Tomahawks and the swearfest that is
My C***’s C***ing C***ed. This song is loosely based on a true tale of a woman in 18th century Russia who gave birth to 69 kids. I say mostly. Whether “her final words before she died was My C***’s C***ing C***ed you C***” is probably not detailed in the monastery manuscript. Bound to be a favourite to sing along to at gigs though.

The album closes on Butler and Cooper (Deceased) – a warming tribute to 2 Sick Monkeys. The adaptation of the Rash sound gives you an idea of how NOFX would sound if they were from the Westcountry rather than the West Coast. “Wiltshire’s favourite sons, Swindon’s number one. Westcountry legends Best 2 piece bar none. This is goodbye. This is the fucking end”. The end of 2SM and the end of this album. And it’s a corker. 18 frenetic songs in 35 minutes with all manner of twists and turns. It’s like the longest downhill run you’ll ever do on a skateboard.

Buy and Listen on bandcamp.