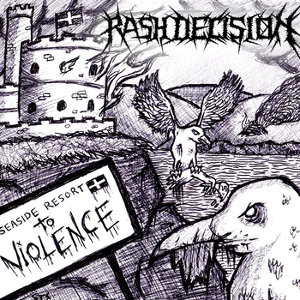 Rash Decision blend hardcore punk with speedmetal to create music for shitehawks to steal your arm to. Nathan Brown reviews

Formed in 2007 in Cornwall I would hazard a guess that Rash Decision are the result of the boredom and anger that can only come from living in a west country seaside town.  As I grew up in one myself I get where they are coming from … the image of a shitehawk with a grockle’s arm (translation: seagull with a holidaymaker’s arm) in its mouth speaks volumes.  The title Seaside Resort To Violence is the sort of wordplay that you come up with when you spend too long sitting a seafront shelter drinking local scrumpy. And while there is an anger throughout this record, I get the feeling it’s not real hatred, it’s fairly tongue in cheek with 2 fingers in the air.

14 songs in 19 minutes is always good in my book.  Musically they play in your face hardcore punk with a little injection of speed metal.  What used to be called “crossover” in the late 80s when no-one was sure if the metal kids had gone punk or the punks had gone to metal.  Some great fast guitar chugging on here.  I guess you might call this Power Violence but I’ve seen that label lazily applied to anyone who can play with a bit of speed and anger.  Gives you an idea, though.

The stand out moment for me is the 37 seconds of Seabiscuit’s Revenge, based around the sentence “What the fuck are you doing to my horse you fucking cunt?”

There’s elements of some great bands like Doctor & The Crippens, Heresy, Concrete Sox, Attitude Adjustment and Nausea.  The vocal performance, heavy guitars, a few choice samples and crew vocals put this in the territory occupied by Cro-Mags and Citizens Arrest.

Although there is a limited run of CDs available, this is primarily a digital release removing the need for pressing plants, horrendous postage costs and charging people for it.  I don’t understand why more bands aren’t doing this.  Maybe because of format snobbery?  I really like the physical artifact of a record but when the technology is there why do some music lovers turn their nose up at it?

I even had the urge to shout “mosh” and “metal militia” while listening to this.  Recommended to be played with the volume turned up, as should be the peak on your baseball cap.

You can find Rash Decision on Facebook and BandCamp

Words of West Country solidarity by Nathan Brown. You can read more of his work at his Louder Than War Author Archive.