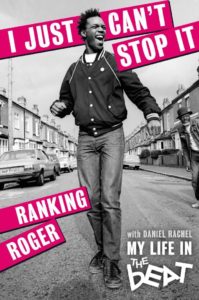 March 2019 saw the shock news of the passing of one of the UK’s most distinctive musicians Ranking Roger. Not long before his passing came the news of an official autobiography entitled I Just Can’t Stop It. Published via Omnibus Press in June 2019 the legacy of Roger will not to be forgotten in a hurry with this marvellous publication. Matt Mead reviews for Louder Than War.

Late 70s gave birth to a plethora of bands embracing Ska music like never heard or seen previously. 2 Tone records, masterminded by Jerry Dammers, had a multitude of these bands signing to them including Birmingham’s The Beat, or The English Beat as known in U.S.A. . Some of the best loved songs of the period include chart successes Mirror In The Bathroom, Tears Of A Clown and Save It For Later. Admiration for this material has never faded after 30 odd years.

Named after The Saint Roger Moore, he grew up in Coventry through the Windrush generation, his Dad was a big fan of the sophisticated suit wearer as well as being an accomplished saxophone and guitar player. His upbringing sounds a cosy affair, where he heard the sexy sounds of Ska for the first time with Desmond Dekker plus Dave and Ansell Collins being the preferred flavours.

Roger certainly tells a heart-warming tale or two. Spinning a yarn on many a tale including thieving from shops before politely saying goodbye to the salesperson. Equally cheeky when The Beat became successful he went back to school to show off some of his spoils including a new car. A favourite teacher Mr O’Sullivan was there to see his prodigy float gracefully amongst the school grounds. He also took the opportunity to see those teachers that thought he would be nothing, a dreamer, a nobody, but Roger knew he had won the battle.

The book actually starts with an in your face description of the skinhead movement. All bands associated with the Coventry label, including Madness, Bad Manners and The Specials, denounced their following of such. A clear narration of an early gig where Roger was confronted by said audience member is shocking to read, but Roger was firm in standing his ground on stage, unmoved, unnerved by the experience, this was the start of Roger’s eyes becoming opened to the world and everything it had to throw at him.

Rogers rise to fame initially included UB40 but then when he joined The Beat, that was his destiny, helping them conquer America playing huge gigs along the way without seemingly getting a leg up. The story hereon-in sounds like he was on a high speed train, without stopping, a whirlwind ride that included sharing stages with the biggest acts in the world including Talking Heads and R.E.M. The latter they saved from getting a hiding on stage due to them playing weird slow psychedelic music as Stipe and co were their support band in the 80s plus he got to kiss the Queen of Pop Madonna with tongues he adds, no doubting he was living in a material world.

I Just Can’t Stop It can be purchased from The Beat website.