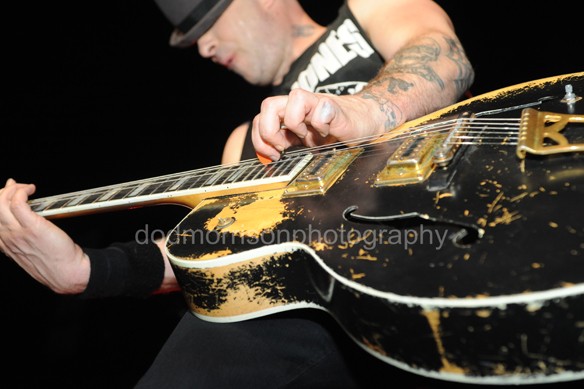 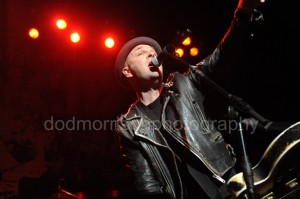 Cock Sparrer Conquer San Francisco’, would be a most appropriate headline, however my story starts last Tuesday, where despite a two and a half hour delay, due to air conditioning problems, our flight touched down in SF, birthplace of the hippy era, but no flowers in our hair! The next couple of days were spent bracing ourselves for the forthcoming aural onslaught by indulging in some serious retail therapy ”â€œ cheap Levis in Macy’s, before heading up to Haight Ashbury with the smell of dope forever present (something that seemed very difficult to escape at times).

The Haight is synonymous with the flower power era, former residents including Janis Joplin, The Grateful Dead & Sid Vicious (?!) among others. Today, tourists still cluster at the intersection of Haight and Ashbury, where a two-faced clock seems frozen at 4:20 and “high noon”Â ”â€œ nudge-nudge references to dope culture. And although you will still find the odd hippy paying their respects to Jerry Garcia et al, today the area seems to be full of the great unwashed ”â€œ maybe the blow is for taking the smell away. And so we came to the first night’s show. Moving towards the waiting queue of expectant concert-goers, past the tables of dope-addled chess players (can we now expect to see this as a sport that is subjected to drug testing?), the Warfield beckoned.Ã‚Â

This venue puts me in mind of the old music halls with the splendour of the interior dÃƒÂ©cor, covered from wall to wall with posters and pictures of various performers (Robbie Williams next to the Cramps anyone?). The gig itself was full of anticipation, for bandsÃ‚Â and crowd alike.Ã‚Â 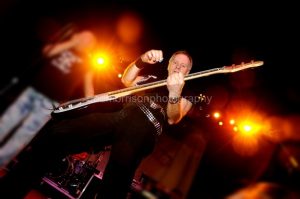 After a support slot from Noi!se it was time for the dual-headliners to take to the stage. The lights went down, the intro kicked-in, the crowd roared and the weekend properly started. Sparrer steamed into ”ËœRiot Squad’ and from the first note to the last on ”ËœWe’re Coming Back’, the band and crowd were as one. In all honesty I am probably biased towards Sparrer, however in truth Rancid struggled to follow them and didn’t achieve quite the same crowd reaction. However the second night was a different picture; whilst the first show was good, this turned into an exceptional evening.Ã‚Â

Following a set by Factory Minds, and having thrown off any sense of nervousness, Sparrer went about their business with a sense of real enjoyment. Blasting through a similar career-spanning set to the previous evening ”â€œ including ”ËœWatch Your Back’, ”ËœRunning Riot’, ”ËœBecause You’re Young’, ”ËœSussed’, ”ËœTeenage Heart’, ”ËœWhat’s it Like to be Old?’, ”ËœTough Guys’ and a rare outing for ”ËœA Price Too High to Pay’. Cock Sparrer certainly did Take Em All!

As a consequence, Rancid had to seriously up their game and were well aware of this. Fighting hard to reach a similar peak. Lars gnarled and snarled like his life depended on it, Matt & Branden so accomplished with drums and bass, respectively, providing the backdrop for Tim Armstrong to swirl round the stage like a demented Frank Spencer. Again, the set was another career perspective, ”ËœIf I Fall Back Down’, ”ËœTime Bomb’ being major highlights.Ã‚Â

Cock SparrerÃ‚Â wasÃ‚Â pulled on stage for a sing song of Happy Birthday, before finishing on ”ËœRuby Soho’. Everyone finished with a smile on their face, due to what was a truly memorable evening. So, let’s do that math (It’s maths ”â€œ Ed): 1 x band celebrating 40 years, 1 x band celebrating 20 years + 2 x sold out shows (1 in 12 minutes) = 1 big party! The weekend finished for us the next morning with a breakfast party with those very fine chaps (& chapesses), Pirates Press, at their HQ. Several Bloody Mary’s and portions of French toast (is that an euphemism? ”â€œEd) later, we headed for the airport, tired and delirious, oh yeah and a tad merry. This carried on until we boarded, although this reporter’s jolly demeanour did not go unnoticed by those fine pillars of virtue at BA, who raised their concerns with my fellow travellers. Voice of reason Steve Bruce later commented, “You weren’t that bad, although we’re used to seeing you like that.”Â Thanks mate!