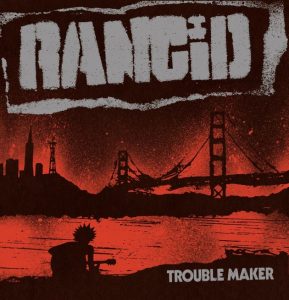 Kings of Californian punk return with their ninth studio album, a record that trots more than it gallops.

It’s difficult to know where to begin with Trouble Maker, the ninth album from Californian punk stalwarts Rancid. On the one hand, it’s everything we could want from a Rancid record. Organs and upstrokes? Check. Buzzsaw guitar solos? Of course. Tim Armstrong’s breathy drawl juxtaposed with Lars Fredrikson’s biting bark? Naturally. On the other hand however, it’s also everything we’ve come to expect from a Rancid record and as such, does little to break a framework the band established albums ago.

Of course, that doesn’t mean to say that there aren’t stand out tracks present. Telegraph Avenue bristles with the energy and melody of the band’s Indestructible era, while Where I’m Going recalls the two-tone influences of …And Out Come the Wolves. The issue is that much of the notable material comes in the record’s first half, with the latter half left feeling somewhat neglected. The exception to that rule is I Kept A Promise, its Ramones-eque guitars and rousing hook lifting the album out of a late-in-the-day slump fantastically.

Going off comments so far, it would be easy to suggest that it seems Rancid might have lost their way. But that simply isn’t the case. It’s that their way is so well-travelled, that tropes that once felt fresh and exciting have become now all too familiar.

It is, however much a double-edged sword, also a testament to the band’s legacy and longevity, and there’s still plenty of evidence that the spark behind the band is still burning strong, though perhaps not as fiercely as in their younger days.

Trouble Maker, though unlikely to contend with the likes of …And Out Comes the Wolves or Life Won’t Wait, is a fair edition to the band’s canon, and a good entry point for the uninitiated given its accessible nature. That said, fans of the band’s harsher and heavier output might find themselves pressing ‘next’ on more than one occasion. A not bad effort from punk oldhats that unfortunately seems to trot rather than gallop.