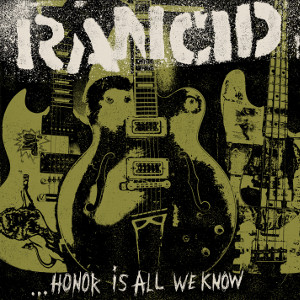 Rancid – …Honor Is All We Know (Epitaph)

Louder Than War’s Nathan Brown finds Rancid still standing as the Last Gang in Town on their most recent offering.

For three weeks this review simply said “It’s like …And Out Comes The Wolves only more so”. I realised that wouldn’t cut it with the LTW team but I didn’t want to waste anyone’s time describing Rancid. I reckon people will know if they like them or not already. And if you like Rancid at their best this album won’t disappoint.

Since they made it “big” and the mainstream music press noticed them last century (!!!!) Rancid have oft been likened to The Clash. It’s easy to see why: stylistically, in their music and from a punk’s point of view, in terms of the arguments they can provoke about whether or not they have “sold out” with all their media exposure (the verdict, incidentally, appears to be that they haven’t). One thing is for certain – the production and playing on this latest LP was always going to be good. Given the prolific work of Rancid as a band and as individuals with all their side projects (Old Firm Casuals, Transplants, Tim Timebomb, etc) and in particular Tim Armstrong’s work as a producer they know what they are doing.

The LP itself is more killer than filler, although there are no particular surprises. It’s delivered according to the Rancid formula combining shoutalong chorus fist punchers, skanky dancey numbers and reggae groovers. Rancid by numbers is okay as long as you are Rancid. As I said in my introduction, this could easily pass as a continuation of “…And Out Come The Wolves”, which in my view was always their stand out release. “Evil’s My Friend” is a bustin’ ska number complete with Hammond organ. Some of Jimmy Cliff’s genius in the reggae stakes rubbed off on Tim Armstrong when he produced the reggae legend’s Rebirth LP.   If you replaced Tim Armstrong’s vocals on “Everybody’s Sufferin”, it could easily have come from that LP.

The songs occasionally veer towards the naff lyrically with the fixation on violence and portrayal of a street gang mentality but I can forgive them this. Their love of Oi, street punk, call it what you want, is no secret and they have forged friendships with the likes of Cock Sparrer and The Business. It’s only right that they reference Sham 69 on “Collision Course”.

As I said above, die hard fans of Rancid (usually easy to spot courtesy of back patch) will like this, but so will those who are more choosy about Rancid’s back catalogue.