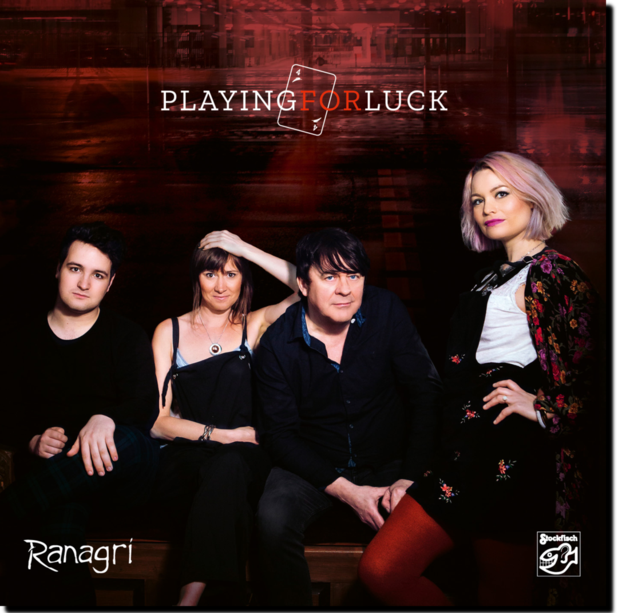 Fourth album from the folk quartet who mix their traditional influences with some contemporary musical and lyrical bite.

An album  too that introduces what Marjorie Dawes from Little Britain’s Fat Fighters would call a ‘neeeewwww member’ in harpist Ellie Turner making her Ranagri recording debut and one that also sees a greater percussive emphasis at the hands of Joe Danks.  Their ‘new direction’ doesn’t quite hit the heights  of the bizarre qualities of  Spinal Tap’s Jazz Odyssey but for sure sees them aiming to live up to what they’ve termed as  “progressive, poetic and vibrant.”

While we at Louder Than War might have referred to their last release, Voices, as an album where you’re  “unlikely to hear anything more folky this year”, from the off,  Playing For Luck suggests quite the opposite. The ominous sounding The Strangler opens proceedings, displaying a darker and more chilling side via an ambience of a Parisienne dusk and a blend of Guy Garvey and  Hawley style crooning,  before Eliza Marshall’s flute work significantly enters  the fray halfway through Devil’s Need to confirm that there’s a lightness at the end of a short tunnel.

The coating added by  Ellie Turner’s glittering harp belies the “back to the days of black and white” and (shock, horror “two fat ladies off their tits” – well, really…) and tongue in cheek realism  on The Medication Show  – we premiered the video last August (view here) yet  their folk roots aren’t abandoned. The Thief’s medieval vibe combines with  Falling Down which could easily pass as  pure bucolic Tull cross bred and fused with some Celtic embroidery while the gentle acoustic trundle that flows and permeates  through  a dreamy Sometimes Home offers a mellow and pastoral alternative.  The thought that we might have been anticipating  jigging and chair dancing along to some new Ranagri has to be parked in lieu of arrangements and writing that seems much more mature and meticulous.

Coming full circle, Out There makes its own  case for the album highlight as it pleads and ponders with a simple yet understated but strident piano figure and finds itself typifying the Ranagri  healthy dose of realism that awaits most notably in  Waiting For The Rain and the “wild, wild world” described in Trees. The album’s  gambling motif that suggests Ranagri are taking a few chances seems to be one that pays off. With a few aces up your sleeve, there’s no point in hedging your bets as they sign off with a song of freedom and barely disguised jibes with  mention of  “building big fences in far away places.” Not a ‘B’ word  or a ‘T’ word in sight but more than enough of  the promised progression, poetry and vibrance.