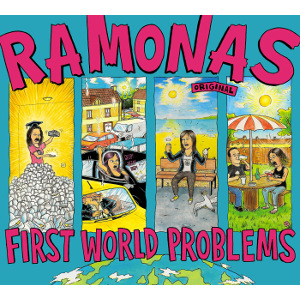 The All Girl Tribute to the Ramones (who else?) have brought out an album of original material and it’s more diverse than you might expect says Nathan Brown

The Ramonas have made a name for themselves as a tribute act. But this – their first full length release of original material following on from a debut EP – is not a reworking of Ramones numbers masquerading as originals.

There is evidence of The Ramonas years spent emulating the Ramones, notably the dropping in of floor tom beats for accent and the overdriven Marshall guitar sound. However, the buzzsaw is not as ubiquitous as you might expect and there is some twang in there. At times the guitar, in particular, brings to mind Jello Biafra and the Guantanamo School of Medicine or the garagey punk stylings of Dee Dee Ramone’s solo output (nope, NOT Dee Dee King). But in truth it’s roots are probably back to basics rock’n’roll channelled through the Cramps. While “Tearaway” sounds like it could have come from the “Too Tough To Die” era and “Cotton Wool Kids” has an
uncanny similarity to “Havana Affair” as it kicks in, The Ramones are not the first band I would compare The Ramonas to. They have a solid polished punk sound, the sort of production and tempo that we have come to expect from the likes of the UK Subs (more of them later). There is a definite Sub Pop, grunge vibe going on here and fans of Hole or L7 will dig this shit. There is also something of the upbeat rock’n’roll exuberance of early Girlschool or The Runaways.

What they do have in common with The Ramones is that they are singing about what is going on around them. Underneath the bruddas “dumb” image was a snapshot reflection of the everyday concerns of NYC’s freaks and junkies. Similarly, the sistaz here sing about things that concern all of us in 2017. The title track “First World Problems” is one of those rockin’ tunes with a hint of Blondie. The lyrics take their cue from the social media hashtag #firstworldproblems and make a clear point: “I’ve got too many clothes, I can’t charge my phone but all you did was moan when they bombed your home. You run for your life, You swim or you drown. I can’t
get out of bed I’m feeling down”. Add to that songs about road rage and self-absorbed posers they paint a picture of what a fucked up society we are living in at every level. And with “Cotton Wool Kids” taking aim at how middle class kids are protected from the reality that their privelege is based on someone else’s suffering, I think it would be fair to say the central thread of this album is to stop thinking about yourself and look around at what is going on. On album opener “2016 (F**k Thi$)” with Trump and Farage in their sights they sing “Nothing shocks us anymore. The rich get rich, the poor stay poor. Money holds the power. Look down from their tower”. The “The Daily Fail” is also on the hit list of bad guys. Republican card carrying Johnny Ramone would not have approved, but I’m sure kind hearted Joey would have.

The Ramonas really know how to use crew/football terrace choruses to great effect – plenty of woah woah sign along moments. Charlie Harper joined them in the studio to play harmonica on “Tearaway” and even gets name checked in the song. Who benefits most from that mention is open to debate!

The cartoon cover befits a bunch of Ramones maniacs, and they share an appreciation with the bruddas for less serious matters: “Zombie Crawl”, “Ramonas go to Freiburg” about tour fuckups, and “Microwave Mandy” in which our eponymous victim’s inability to cook backfires: “Her insides melted ’til there was nothing left. She zapped herself to death”. It was bothering me for ages who this last tune reminded me of and then it hit me – the B52s! It kinda makes sense.

CD and downloads are out now. Vinyl is due in November.