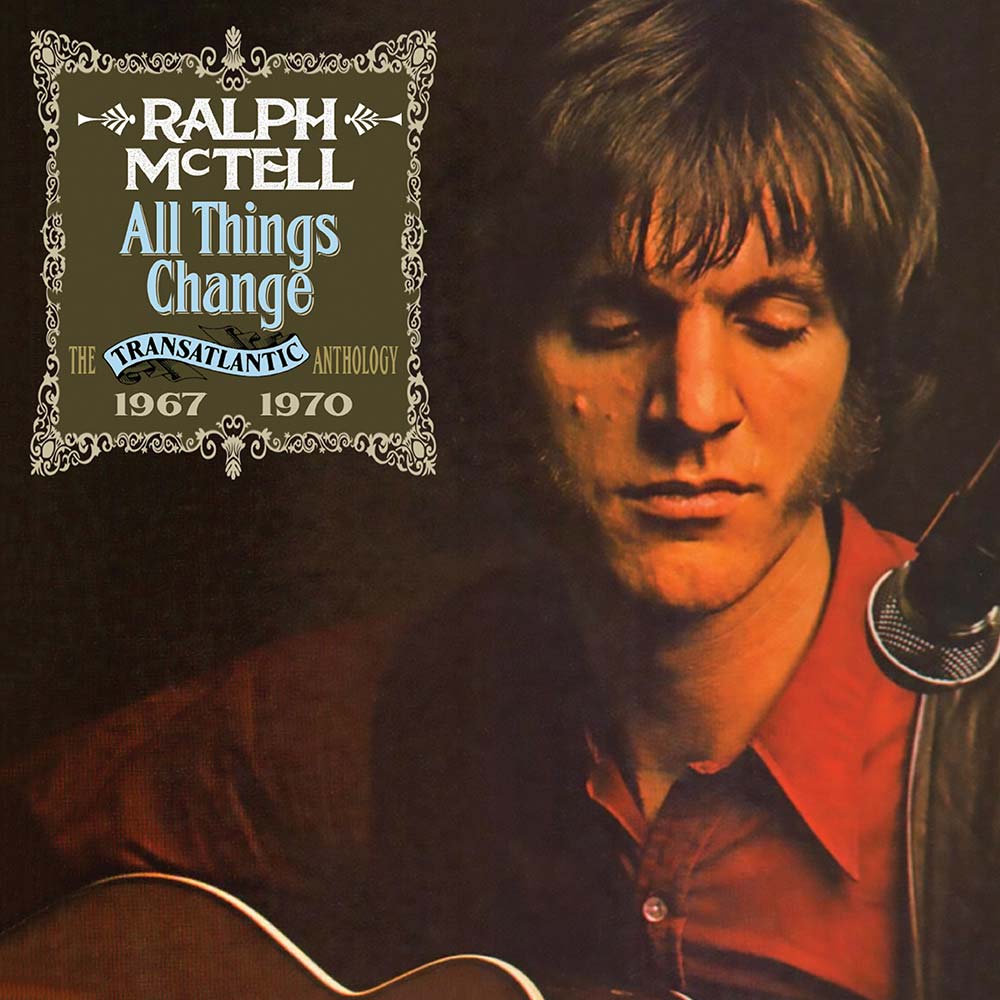 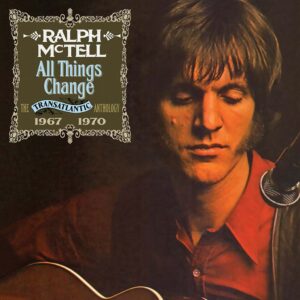 All Things Change ~ The Transatlantic Anthology 1967-1970

One thing that is certain is that McTell certainly wasn’t idle during the three years he spent on Nat Joseph’s Transatlantic label. Three albums in three years plus a compilation of re-recordings originally destined for the American market are squeezed on this double CD compilation. Ralph spent several years honing his songs and busking in Europe so material wasn’t an issue when it came to recording his first LP, “Eight Frames a Second” in October 1967. Featuring two future luminaries of the music biz at the helm (Gus Dudgeon and Tony Visconti), the album saw Ralph try to wrestle back creative control on his own LP. He managed to get his own guitar playing on the record but had to concede defeat on the request of the label to include two cover versions (“Morning Dew” and the rather lame “Granny Takes A Trip”). Unsurprisingly these are the two weakest tracks on the record, lying miles behind Ralph’s own compositions. The production is surprisingly sympathetic and Visconti’s arrangements show great care in letting the songs breathe, from the accordion on “Nanna’s song” to the string arrangement on the title track, for a first try it is a home run. Ralph’s picking skills are put to good use on “Hesitation Blues” (where he shows his mastery of ragtime) and on the instrumentals “Willoughby’s Farm” and “Blind Blake’s Rag”. His jugband roots show on the bluesy “Louise” while “I’m Sorry – I Must Leave” would have made a good single.

The follow up “Spiral Staircase” released barely a year after starts with what would be come Ralph’s signature song to the point of actually obliterating the rest of his catalogue in the ear of the general public: “Streets of London”. Surprisingly it took a lot of persuading from Gus Dudgeon to get McTell to record the song for the LP. The album stylistically doesn’t stray too far from the boundaries set by its predecessor. The songs might be a tad poppier, the bouncy title track being the perfect example but Ralph’s songwriting deepens as illustrated by songs such as “England 1914” and “Mr Adlam’s Angel”. His knack for crafting catchy instrumentals is displayed again on “Wino and The Mouse”. Often on the record you can see that Dudgeon is trying to push Ralph towards the charts. a quest that would stop on Ralph’s third LP “My Side Of Your Window” where Ralph produce himself for the first time. This album sees Ralph finally in full command of his recording destiny, the sound is sparser, acoustic guitar at the fore on most of the tracks. McTell’s writing reaches new heights particularly on the chamber-folk of “All Things Change”. Opener “Michael In The Garden” starts things off in an upbeat manner, immediately offset by the lament of “Clown”. “Blue In More Than 12 Bars” is a delightful slice of storytelling a-la-Dylan while the delicate “Kew Gardens” features the only female backing vocals on the album.

The closing set of songs on CD2 belongs to a compilation entitled “Ralph McTell Revisited”. Initially envisaged as a straightforward best-of, it  then became (thanks to Ralph dissatisfaction with the original recordings of the songs)  a collection of re-recorded songs from his second and third albums. The album was supposed to be used to introduce him to the American market but ended up never being released over there. It nevertheless enabled McTell to show the songs of his second album how he intended them to be.