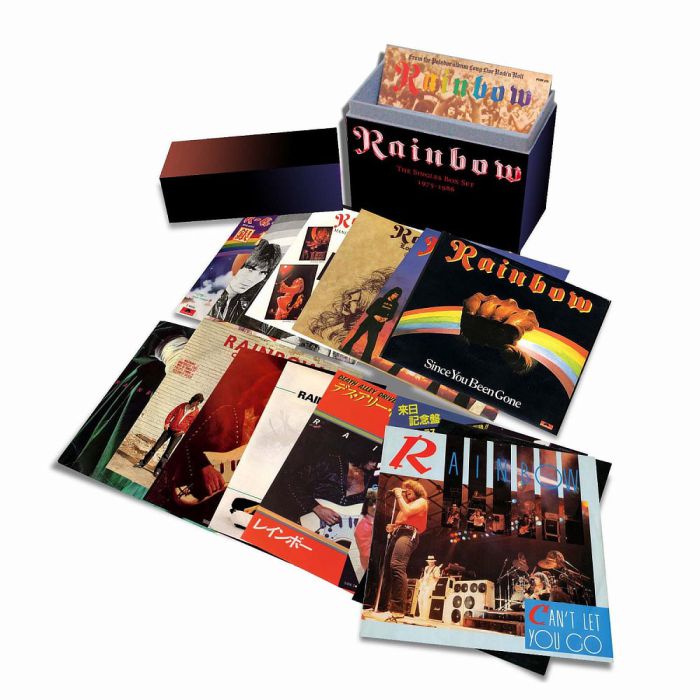 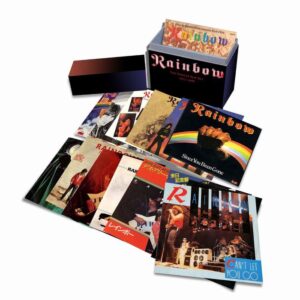 Rainbow was a band that had their place in rock history stitched up. Though the line up of the band was constantly changing and evolving, the output of the band was remarkable. With Richie Blackmore leading the group, such luminaries as Ronnie James Dio, Roger Glover, Cozy Powell and Graham Bonnet all bolstered the ranks at one point or another during the bands two stints as a going concern.

This singles box set pulls together the bands singles from their first stint together from 1975 – 1984. The box contains 19 singles in replica sleeves. The tracks have all been remastered and the box contains a 32 page booklet featuring detailed annotations on each release written by Rainbow expert Andy Francis. Each single is presented, along with the original B-Sides. The quality of some of the B-Sides would put many bands to shame in their album output.

An early example of this is Snake Charmer, which originally backed Man on the Silver Mountain. The wah-wah guitar that shimmers in the background of the track sounds superb and Dio’s vocal style and energy goes without saying. The track is a hard rock affair that is steeped in the blues. The honky tonk thump of If You Don’t Like Rock’n’Roll still sounds vibrant, and Run With The Wolf’s plodding, foot tapping beat is majestic and the guitar work in the soloing is second to none. Dio’s singing is soaring and shows why he is probably the greatest hard rock singer ever. As you move through the set, a collection of live tracks from 1977 make up Disc 5. All the tracks, including Kill The King and Man on the Silver Mountain show how tight the band were as a live outfit.

Following Dio on vocal duties was Graham Bonnet. In 1979, the band brought Argent’s Since You’ve Been Gone to the public conscious. It has been a staple of classic rock radio ever since. The German version of the single was backed with a great little track called No Time To Lose. If there was ever any doubt that Bonnet could follow Dio, they were completely allayed.

Next single, All Night Long was backed with a German track entitled Weiss Heim. This is an instrumental track, and the band again used the same formula on the B-Side to I Surrender with another German language instrumental track. Difficult To Cure has a great track tucked away on it called Jealous Lover. The song was released in America has part of a 4 track EP. The song features Joe Lynn Turner on vocals and it is a track that is reminiscent of Bad Company, certainly in the vocal style. Stone Cold is also in the same vein. The more hard rock side of the band moved towards a more blues rock oriented style.

Overall, the collection of legendary work is comprehensive and contains the releases as they were issued from various parts of the world. Some songs are replicated on different releases so some songs are here multiple times. As with many boxed sets, how much new material does this offer the die hard fan? This collection will not be picked up by the lay fan, but the hardened fan might feel slightly aggrieved that the set does not contain much in the way of exclusives to convince them to part with their hard earned. For a collector, this is a great addition. The physical product is always a joy to listen to, look at, read and enjoy. If you purchase this, you will be getting some of the greatest rock music ever, as well as a lavishly presented product.