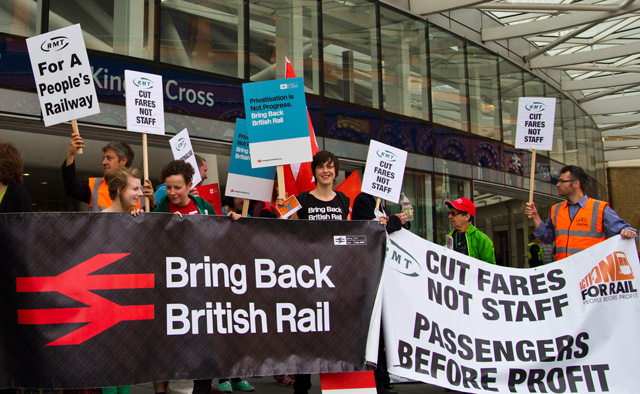 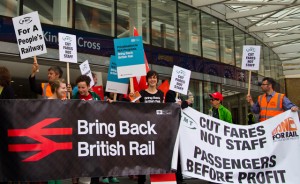 Too many protest singers, not enough protest songs. So sang Edwyn Collins on A Girl Like You in 1995, around the same time as John Major’s Tory Government were privatising British Rail. We can debate the current state of protest singer:protest song ratios but one thing is for certain, the effects of rail privatisation in the UK have been horrendous for ticket prices.

As of 2nd of January 2014 fares are going up by an average of 3.1% with annual season tickets to London from places such as Bedford and Reading now over £4000. The north doesn’t escape either with even a short commute between Leeds and Wakefield now costing close to £1000, at £992 a year.

But campaign groups such as Action For Rail and Facebook group Bring Back British Rail are fighting back and have adopted The New Fares, a song from Rotifer’s excellent new album, to accompany their Kings Cross station protest as the fare rises kick in tomorrow.

Robert Rotifer says he wrote the song in reaction to a poster he saw at his local train station at the end of 2012, tauntingly announcing “the new fares” like some kind of special treat. It’s full of great lines like ‘We’ll pay what you say, if you take us to work’ that are full of agitation and sometimes resignation but always contain Rotifer’s trademark, keen sarcastic wit. The guitar lines skip along like a train on the rails and there are stops and starts evoking the crowded stations of disgruntled passengers and the physical and mental fragmentation of travel.

Ever get the feeling you’ve been cheated? I don’t know about you but when it comes to travelling by rail I feel like that all the time and the sale of Royal Mail made me feel just as sick. Labour MP Peter Hain has today called for Royal Mail to be re-nationalized by a future Labour Government. We are now less than 18 months away from a General Election and it’s time for us to make our voices heard on our rail network too. I don’t think there could be a more appropriate anthem for the times we are living in now than this.

You can buy the track and make it the first number 1 single of 2014 here.

There is also a Tumblr page for Rotifer gigs and releases.

You can join the Action For Rail Campaign as they assemble at Kings Cross Station tomorrow –  Thursday 2nd January from 0730 to 0830 and let our hard pressed rail passengers know they have a voice and a campaign that stands up for them – See more at the Action For Rail site .

All words by Willow Colios. More writing by Willow on Louder Than War can be found at his author’s archive. You can follow him on Twitter @ShootTheSinger.