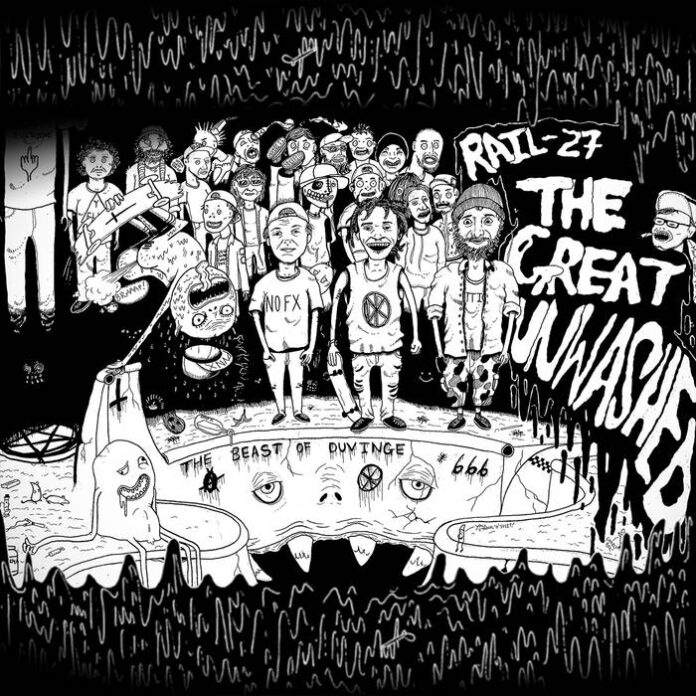 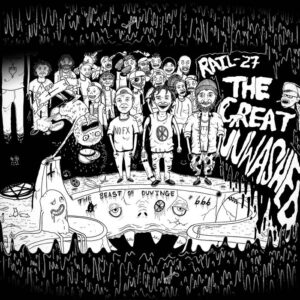 Rail-27 are not just formidably raucous and vibrant, they’re politically on point and only give a f*ck about the things we should give a f*ck about. And showering isn’t one of them. The pent up frustrations and humour of a new generation have used political awareness to replace the classic themes of nihilism and narcissism.

The great unwashed is a big mix of tracks that often appear very short, as if bursts of attention deficit energy peak and peak and peak until slowly mellowing as the album goes on.

The much more angsty and isolated feelings of tracks like Small Talk, Skab and 96 hours are welcome. In a world of false online representation and ultra social connection, it’s good to hear people being honest in saying we really don’t want to f*cking talk to you. These tracks all speak to the weirdo in us.

One of the most fantastic songs on the album is ‘Be a man’, spelling out misogyny to the ‘not all men’ crowd and beyond:

“Because emotion is the enemy,
Find comfort in misogyny.
Feelings are a female trait,
Suck it in, stand up straight!”’

The vocals are really on point on this track, which needs to be blared all summer and thereafter. This lot detest the OBEY wannabe skater crowd and the inherent sexism that the ultra fashionable bring. They’re sick of growing up, clocking in and upholding sexist, racist and capitalist quotas. They say things that actually mean something, which is in and of itself a prize.

TDD keeps the pace up with angry rants which are poignant and accurate:

“All the fascist propaganda,
Got you head strong.
Don’t want no,
EDL.
Promoting ignorance,
Because tolerance don’t sell!”

It’s utterly exhilarating to have raw chords you can throw your elbows around to, with content matter that isn’t a flat-line of drugs, misogyny and having a good time. Unless, of course, your idea of a good time is dismantling the class system. Which it really should be.

The harder hitting songs lie at the beginning of the album, really mellowing out by the time you reach the Woah Man Dub, a post modern stoners collection of samples that, of course, include The Dude. Not to be outdone by the Love Dub, a cheesy keyboard rhythm with a voice repeatedly screaming ‘fuck you’. It’s like they stripped down all the popular music of the last five decades and saved women the trouble of having to work out what the message was toward them. Now that’s efficient.

Some contradiction lies in the ongoing structure and ethos of the band and the lyrics, which is a natural occurrence when considering The Great Unwashed is a collection of old songs and new. Many of the works seem to have been hobbled together as the band itself formed, and some created when they had hit more of a stride and found their voice.

All in all, this is a great work, and not just for a bunch of kids hashing out their musical ability. A lot of care, passion and spades of talent forms the bands output. There’s no pretentious leanings or tedious generic pulp. This is an angry mob, but an articulate one, which takes on the different forms of fascism head on as well as its own confused demeanour.

Rail-27 can be found on Facebook and you can hear and buy the album here.

All words by Halima Amin. More writing by Halima on Louder Than War can be found at her author’s archive. You can also find Halima on twitter as @MaceWindude.