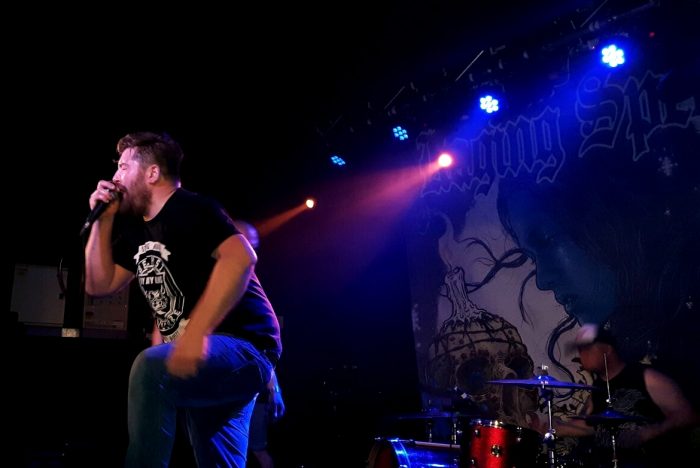 Back in the early nineties, Raging Speedhorn were quite the proposition in the British Metal music scene. I remember going to one of their gigs to promote the debut album, back in 2001. I took a stoner friend with me who had been partaking in quite a session prior to me picking him up. It was on that fateful night that Raging Speedhorn almost scared my stoner friend to death, as one of the dual vocalists, John Laughlin, seemed to spend the entire night screaming directly at my friends terrified little face. It was, for me at least, unintentionally hilarious and subsequently earned the Speedhorn a place in my steely heart.

Skip forward Sixteen years later and there’s a new Speedhorn album hitting the shelves. ‘Lost Ritual’ is the first Speedhorn album in over a decade to feature the bands original vocalist Frank Regan back on duties with Laughlin. It has already earned its place within my top five albums of the year to date list.

As Speedhorn hit the stage it becomes apparent that they are encountering some serious sound issues. During the first few tracks nearly every band member is frantically pointing up or down at the scary looking sound guy who is doing his best to sort out the problem. Whatever the problems the band was fighting against, they won out easily, as the Speedhorn brutally tore through an hour and a half of intensely sludgy, riff heavy brutal metal. If you hadn’t have seen them pointing up and down furiously in the manner of a disco band with rage issues, you’d have never known, such was the tightness of their sound.

New tracks such as ‘Halfway to Hell’ and ‘Motorhead’ (which is not a cover of the classic Lemmy & Co track, but a tribute as subtle as a drunken punch to the larynx) came across every bit as impassioned and relevant as anything they played from their first two sterling albums, and were lapped up by an audience that whilst vocal, didn’t hit the floor in as heavy a fashion as the band played. This may well have been down to the fact that the venues floor was so awash with spilt beer that it was as if we were watching Speedhorn on Ice, if you will.

As set ender ‘Ten of Swords’ reached it’s guttural conclusion, the band leave the stage to a rapturous applause from an audience who no doubt will agree that the Speedhorn are a great British metal institution.