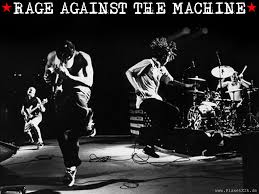 It was an audacious and brilliantly funny set piece of very modern media wars.

The battle for the christmas number one – once a moment of gonzoid fun had become the annual X factor romp of dull singers stuck through pitch machines attempting to stay in tune to some rank ballad for consumption and then forgotten by the near dead to buy in their millions.

Bored the predictability of this John Morter and his then wife Tracy, started a facebook page to get Rage Against the Machine to number one with the fantastically unseasonable ‘Killing In The Name’.

It worked. and the the most unlikely christmas number one of all time sat at the top of the charts.

The fact that it’s also a great song was a huge added bonus and the band fulfilled  promise to play a free show at Finsbury park on June 6 2010 – a momentarily reformation that is now getting released on film.