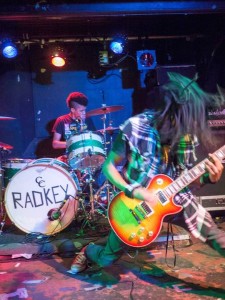 Just up the road in Manchester Academy, scores of punks, mods and rude boys are enjoying the nostalgia of From The Jam, The Undertones and The Beat. As part of the Academy 25 Years celebrations, there’ll be some seriously classic tunes belted out tonight, much to the delight of the 2000 strong crowd, with only the fantastic Louise Distras representing the here and now.

Meanwhile, not far away in the downstairs room of Sound Control, no more than 100 people turned out for the latest visit from the Missouri punk rock trio Radkey.

There’s no bigger lover of the 70’s and 80’s Punk and New Wave scene than me and on any other night, you’d have found me getting my Teenage Kicks In The City before staring in that Mirror in the Bathroom…but not tonight.

Radkey are today’s definition of punk rock power, giving us that raw passion and energy that at times, reminded me of The Clash and The Ramones and even Discharge in their punk rock prime. Brothers Isaiah, Solomon and Dee Radke formed the band in 2010 and only played their first live gig a year later…now though, they possess the ability and drive to deliver an hour of undiluted punk rawness that we normally associate with those heady days in the 70’s and 80’s.

Showcasing their new album Dark Black Makeup, as well as older material from Cat & Mouse and Devil Fruit, Radkey were straight down the middle, in your face and uncompromising. That’s what we came for and that’s what we got – surely it’s only a matter of time before Radkey are playing in front of 2000 instead of 100?