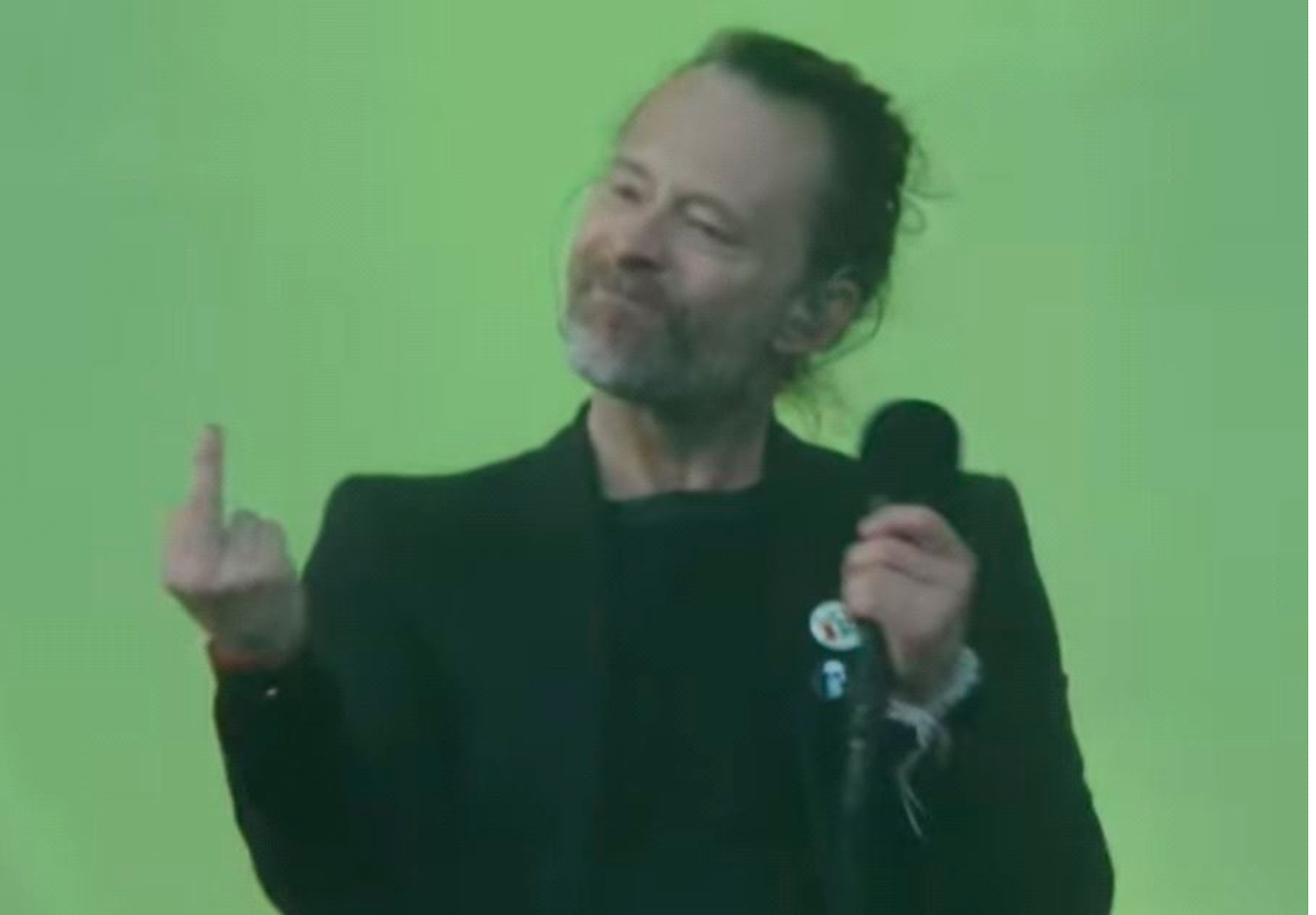 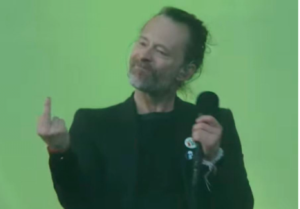 Radiohead’s upcoming gig in Tel Aviv has run into lots of controversy. Whilst their recent UK shows have been astounding, with rave reviews here and here, the proposed show in Israel is causing all kinds of protest – from Palestinian flags in crowds, demos outside stadiums by the BDS campaign and online protests.

For some playing a gig in Israel legitimises the state and its oppressive treatment of the Palestinians and it’s created a big online debate. The band have so far kept out of the row apart from some remarks from Thom Yoke on stage at their recent Glasgow gig and some quotes in Rolling Stone where Yorke described the situation as “offensive” and “an extraordinary waste of energy,” saying: “I don’t agree with the cultural ban at all, along with J.K. Rowling, Noam Chomsky and a long list of others…
There are people I admire [who have been critical of the concert] like [English film director] Ken Loach, who I would never dream of telling where to work or what to do or think.”

Yorke called it “patronizing in the extreme” to presume Radiohead is unfamiliar with the Israeli-Palestinian conflict, pointing out that guitarist Jonny Greenwood’s wife is an Israeli Jew.

What do you think? should the band pull out of the show in Israel and uphold the boycott or should they play like John Lydon, Jello Biafra, The Fall and the Stranglers all recently did? Or do you disagree with the boycott along with Naom Chomsky and JK Rowling? Should bands not play any countries with oppressive regimes or is Israel a particularity bad one? Will the band not playing make any difference or if they did play would it inspire the more liberal citizens of that nation? Or do you agree with the campaign that if all bands didn’t play Israel it would create an isolated South Africa type situation and help contribute to big changes?

Ken Loach: Why won’t Radiohead meet me to discuss the cultural boycott of Israel?

Award-winning film director Ken Loach writes in The Independent to ask why Radiohead won’t meet with him and Palestinian artists to discuss the band’s “ill advised” concert in Tel Aviv, scheduled for 19 July.

Loach also contradicts earlier comments from Thom Yorke given to Rolling Stone, that critics of the group’s decision to play in Tel Aviv despite the Palestinian call for the cultural boycott of Israel are simply “throwing shit” at the band in public without attempting to engage privately.

“This is both inaccurate and – even if it were accurate – quite irrelevant. Whether in apartheid South Africa in the past or apartheid Israel in the present, when an oppressed community asks renowned international artists not to lend their names to their oppressors’ attempts to whitewash their human rights violations, it is our moral obligation to heed their appeals. It should be about them and their human rights, not about us and our sense of pride.”

The I, Daniel Blake director continues: “I approached Radiohead’s management with an offer to meet, along with Palestinian artists. That offer was repeated several times over the past three weeks. To date there has been no response at all from the band or their management.”

“This is deeply disappointing. I don’t know who is advising Radiohead, but their stubborn refusal to engage with the many critics of their ill-advised concert in Tel Aviv suggests to me that they only want to hear one side – the one that supports apartheid.”

Ken Loach also writes that, “Thom Yorke chides us for ‘throwing around’ the word apartheid. The definition fits, all too well. Palestinian men, women and children are forced from their homes only to see Israeli settlers move in, they watch their homes being demolished as illegal construction of Jewish-only homes proceeds on confiscated Palestinian land, they travel on racially segregated roads and face humiliation at Israeli checkpoints and roadblocks.”

Loach again repeats his offer to meet with Radiohead, writing, “I and others are still willing to meet Thom Yorke and his colleagues, together with Palestinian artists.”

He concludes by paraphrasing Desmond Tutu: “There is no neutrality in situations of grave injustice. Radiohead need to decide if they stand with the oppressed or with the oppressor. The choice is simple.”

One of the petitions, launched by US group Jewish Voice for Peace, says:

“Palestinian civil society, in an effort to bring worldwide attention to injustice and inequality in Israel/Palestine issued a call for cultural boycott in 2005. We ask you to honor that call.”

In April dozens of artists including Ken Loach, Thurston Moore, Roger Waters and Young Fathers, as well as anti-apartheid veteran Desmond Tutu, signed an open letter calling on Radiohead to cancel the scheduled show in Tel Aviv, which read: “Please do what artists did in South Africa’s era of oppression: stay away, until apartheid is over.”

Israeli musicians wrote to Radiohead last month urging the band to cancel their Tel Aviv show. They said: “Every international artist who plays in Israel serves as a propaganda tool for the Israeli government. International performances in Israel serve the government’s agenda of whitewashing its war crimes against Palestinians by creating a ‘business as usual’ atmosphere wherein the status-quo, a reality of colonization and military occupation for Palestinians, becomes normalized.”

Protests have been held in cities across Europe during Radiohead’s recent tour, including in Paris, Dublin, Manchester and Florence. During Radiohead’s set at the TRNSMT festival in Glasgow, Thom Yorke could be heard repeating the phrase “some fucking people” and was seen on camera giving the middle finger towards the crowd, apparently in the direction of fans waving Palestinian flags.

One of those fans, Struan Mearns later said, “When Thom Yorke swore at us I was shocked but given that they’re willing to break the cultural boycott and help the state of Israel whitewash its crimes, that kind of arrogant attitude is actually not that surprising”.

Many Palestinian flags could also be seen in the crowd during the band’s headline set at Glastonbury Festival last month.