Following on from LTW’s head honcho John Robb’s 10 Thoughts About Seeing Radiohead (which can be found here) our man Simon Tucker (a self confessed long-term fan of the band) gives us the full review of a gig that threw up some pleasant surprises.

Forced into a change of venue due to the tragic event in Manchester earlier this year, Radiohead combined the two planned dates into one and changed the venue to the Old Trafford Cricket Ground. The last time I saw the band play here was in 2008 on the In Rainbows tour and the thought of seeing them here again did fill me with a slight case of trepidation as at that show the band, whilst delivering a stellar set, suffered with poor sound and a crowd more interested in drunken conversations. Obviously this change of venue was not what the band had wanted but when it comes to these things it is important to put things into perspective. The fact the Radiohead machine managed to get all of this sorted so soon was to be applauded and whilst those previous gripes were present again (for the first thirty minutes of the set the sound was dipping in and out spinning with the wind and throughout the entire show the selfie junkies were out in force) they were soon squashed by a band who not only delivered a blistering set but displayed to any doubters why they are arguably the best band in the world right now working on such a large scale. 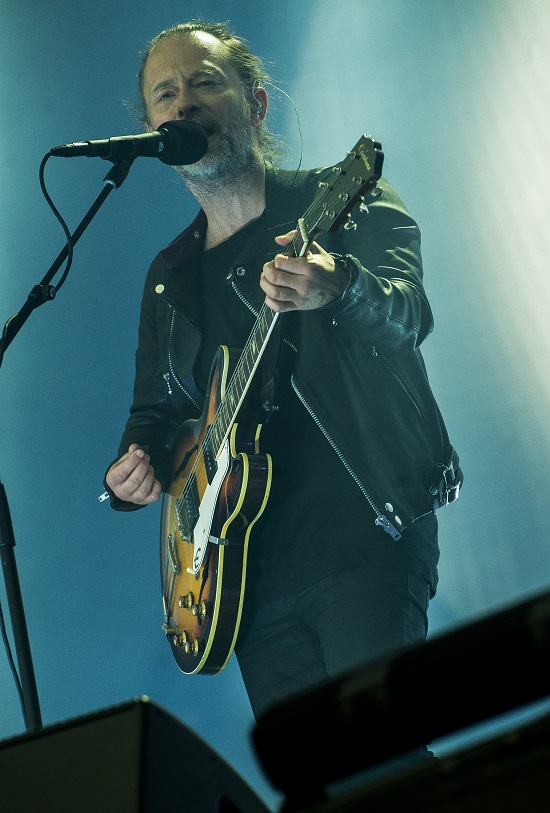 The moment you realise something special was about to happen was from the opening, glistening intro to Let Down from OK Computer (the first time the band have opened a set with the song). As its parent album is getting the full anniversary treatment it is a treat to see this song take its place at the head of the table with Thom Yorke in full committal to the words he wrote all that time ago. Normally it takes a while before we get to the tear jerking moments in a Radiohead set but as soon as he lifts the “one day/I am gonna grow wings” lyric up to the cloud covered skies and the triple guitar  harmonics of Yorke, Ed O’Brien and Jonny Greenwood lock into modern-psych spirals people instantly get to peak emotion. Following Let Down with the equally stunning Lucky we are now aware that tonight the band that were so adverse to looking back are now comfortable in their own skin at at ease with their past works. Nothing from OK Computer is delivered in a give-em-the-hits-because-that’s-what-they-expect fashion. They all (six in total, seven  if you include I Promise recorded during the same period and recently unearthed for the anniversary reissues) are delivered with love and with purpose.

The first swerve to the now occurs when the motorik acid wrench of Ful Stop slowly snakes around the ground building and building until the blitzkrieg breakout at the end, powered by the beating heart (and still criminally underrated) rhythm section machine of Philip Selway and Colin Greenwood and who are joined for the live shows by the brilliant Clive Deamer. Live is where you really see what each member brings to the overall sound of the band with Colin in particular shining live as he snakes through the slinky bass of Nude, the newly nasty as fuck Lotus Flower and the swirling void of There There.

Nothing the band play conforms to static, note-for-note renderings of songs. Everything is morphed into a new with a standard like Fake Plastic Trees starting in a subtle and faithful version before the band climb higher and higher with Jonny again looking like someone who not only loves playing these songs but revels in attacking them with vigor, creating new shapes from the pre-prepared canvas. Identikit is also a revelation as it becomes an anthem right before our eyes with Yorke at the lip of the stage lifting his arms and singing “broken hearts/make it rain”.

So what of the lead singer? Radiohead gigs depend on the frontman’s mood and tonight we are treated to the rock star that lies within him and gets aired from time to time. These changes in Yorke’s on stage persona started around the Hail To The Thief tour where he seemed relaxed, smiling and joking as opposed to the intense artist during the end of the OK Computer tour and during the Kid A/Amnesiac tours that followed. Tonight Yorke is on a mission to connect with the crowd, dropping a lot of the falsetto he used during the Glastonbury set instead  singing right into the minds of those in attendance. Yorke never mentions the terrorist attack directly but he doesn’t have to when the song choices do that for him with You and Whose Army? being the devastating peak. Sat at his piano with a camera trained on his one eye (Big Brother is watching you) and which is beamed on the screens above and to the side of the stage, Yorke delivers lyrics that were once aimed at Blair but now could relate directly to ALL those who have tried to terrify us into submission. Never has a crowd singing “Come on if you think/you could take us on/….we’re out tonight” sounded so pointed, angry, and defiant. He is still of course able to go from vitriol, spit-fast wordplay to the straight narrative aching beauty of songs like Nude, No Surprises and the gorgeous Roy Orbison aching heartbreak of I Promise. 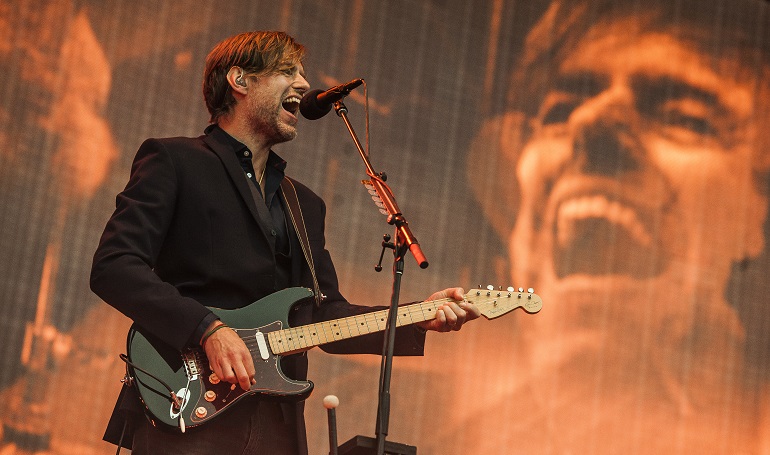 Tonight under a cloudy, threatening sky in Manchester Radiohead showed everyone why they are rightly considered to be one of the biggest bands on the planet. A band that doesn’t compromise. One that can travel  from the gonzo acid freak out of songs like Idioteque and Bloom to the in-your-ear intimacy of Nude, Fake Plastic Trees and Daydreaming. Tonight they touched every part of their career (post Pablo Honey) and created a celebration of their entire zig-zagging legacy without a hint of running-by-numbers. They even surprised us with a run out of The Bends. The band also put paid to the myth that they have forgotten to rock. With songs like Bodysnatchers, Airbag and Myxomatosis Radiohead display a ferocious energy that tells us their love affair with guitar driven sonics and heavy riffing is still present and correct.

Radiohead are in the form of their lives and I for one look forward to what surprises they have in store for us in the future.

Let Down
Lucky
Ful Stop
Airbag
15 Step
Myxomatosis
All I Need
Pyramid Song
Everything in Its Right Place
No Surprises
Bloom
Identikit
Weird Fishes/Arpeggi
Idioteque
You and Whose Army?
Bodysnatchers
2 + 2 = 5
Encore:
Daydreaming
Nude
Lotus Flower
Paranoid Android
Fake Plastic Trees
Encore 2:
There There
I Promise
The Bends
Karma Police
~
All words by Simon Tucker. More writing by Simon on Louder Than War can be found at his author’s archive. You can also find Simon on twitter as @simontucker1979.

Live photography by Mike Ainscoe. You can find more of Mike’s writing on Louder Than War at his author’s archive. He can be found on Facebook and his website is www.michaelainscoephotography.co.uk