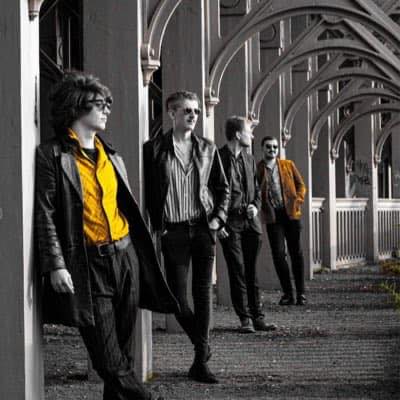 Newcastle-based garage-psych punks Radio Silence announced their arrival in dramatic fashion with the launch of their critically-acclaimed debut EP Isolation earlier this year. Keen to find out more about the influences that inspired the most exciting rock & roll group to emerge from the North-East since The Animals, Gus Ironside asked Jack, John, Andy and Rob to compile a Top Ten for Louder Than War readers. With choices ranging from quintessential ’80s blues-punk to cutting-edge contemporary garage-rock, this is a fascinating glimpse into the group’s formative influences.

There was quite an internal showdown between Fire of Love and Miami, the latter revels in the embellishment of better production quality that really shines through to create that southern tropical soundscape that The Gun Club do best. However, F.O.L. boasts some of my all-time favourite songs; Sex Beat and She’s Like Heroin to Me, although they aren’t dripping with the tactile sound of the sophomore album, they prove that if a song is good it is just good. We tried to invoke this ethos with our debut single Crank Bugs, and sonically akin to the sawn-off punk blues shotgun in your face sound of these early Gun Club singles.

The Cramps – Smell of Female (Jack)

This live mini-album really captures the shambolic psychobilly rock & roll spirit of The Cramps. The crunchy fuzz whirlpool of Ivy’s guitar riffs, the horror operatic voice of Lux along with the rhythm section and the interludes between songs that are almost as good as the songs themselves. Together, they paint a very vivid retro sci-fi meets horror b-movie imagery, which has inspired our songs especially The Hanging Tree and Crank Bugs in this sort of sonic aesthetic.

I’ve always been a fan of Cave’s tenebrous lyricism and this album is embedded in this cloud of morbid humour. When writing the songs Repo Man and Heads Will Roll, The sleazy basslines and swaggering tales of Stagger Lee and Crow Jane were something I tried to envision at the time.

This album, consisting of new recordings of their earlier singles embodies the raw and explosive energy of the band. Songs like We Had Love and Nitro drive throughout with their thunderously heavy guitar riffs overlayed with howling vocals that inspired the sound for Isolation. The first track on the record is also one of my favourites Swampland, a song that sounds exactly how it’s named, dripping in a swampy reverb-laden post-punk brilliance. This idea of a song title reflecting how the song sounds is something we have consciously done with some of the songs on our EP, as well as purposely contradicting this. On The Hanging Tree probably our most ‘happy’ sounding sound we decided to juxtapose it with a title and theme that was completely in contrast to its sound.

Guitarist/Keys Player John: Carrie Brownstein and Corin Tucker have a really inventive approach to playing guitar, and album opener The Fox is possibly one of the heaviest things I’ve ever heard. Together with Ozzy-era Sabbath, they were my main influence to start detuning my guitar (see the sounds at the end of our song The Hanging Tree).

John: A live album taken from two nights in Blackpool that captures the White Stripes at the height of their powers. The band charges through the best of their first four (and best) albums here, and the covers are gems too. Meanwhile, the unusual choice of the Super 8 film format gives everything a slightly otherworldly, ethereal feel.

SLF’s Inflammable Material for me is the blueprint of a punk album. Despite being released in the final years of the punk movement in Britain (1979) for my money there aren’t many other albums that stand close to it. Songwriting wise it has everything, Jake Burns songs of sectarian violence, murder, racism, oppression from authorities and general teenage boredom. Fast, full of energy and anger and those themes are reflected in songs like Suspect Device, Wasted Life, Alternative Ulster and an expertly covered version of Bob Marley’s Johnny Was.

There’s not much that can be said about this album that hasn’t already been said. A post-punk masterpiece exploring vast soundscapes and more dark and dramatic tones. Themes of death, misery and fear underlie the genius songwriting. Songs like She’s Lost Control, Day Of The Lords, Shadowplay and Disorder almost reach out and grab you. The unflinching (and chillingly foreshadowing) lyrics cement why Ian Curtis would become such a cult icon of British music and the post-punk scene even all the years after his passing.

The beauty of bass drum of death, especially with this debut album, is that they continually prove that music succeeds through feeling regardless of complexity. John Barrett’s vocals and guitars have a pure rock and roll swagger. The almost abrasive fuzz on every aspect of these tracks should be too much but it’s not, you feel cool listening to this album and that’s how rock and roll should be.

It’s probably quite obvious at this point to cite Royal Blood in a conversation about today’s mainstream rock scene, especially as a bass player, but their impact was unavoidable with their debut album and this second album and its darker side is the perfect evolution. Mike Kerr’s bass lines are smooth like silk but ooze venom and certainly the fact my bass is driven to an inch of its life through most of our tracks owes a lot to this album.