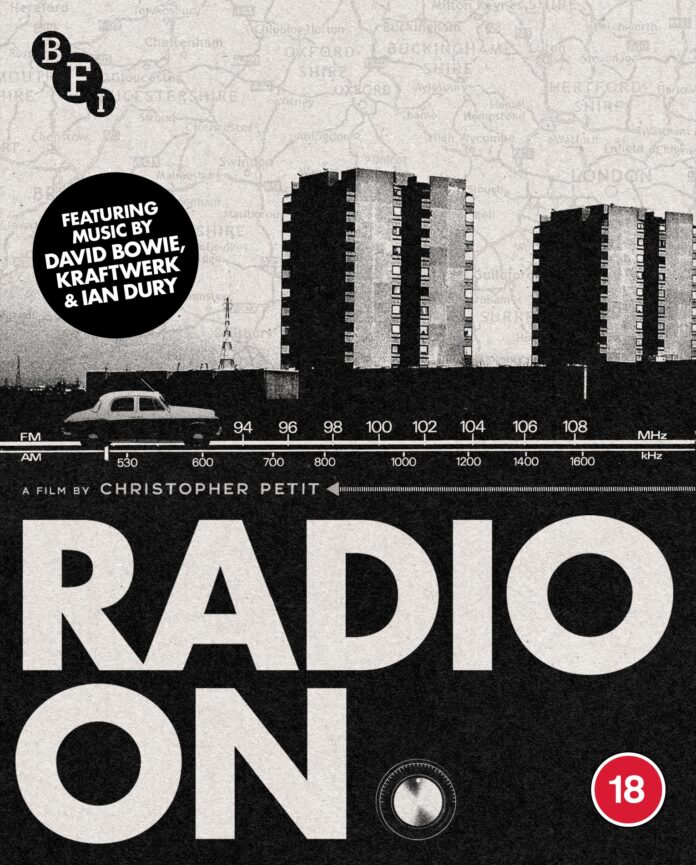 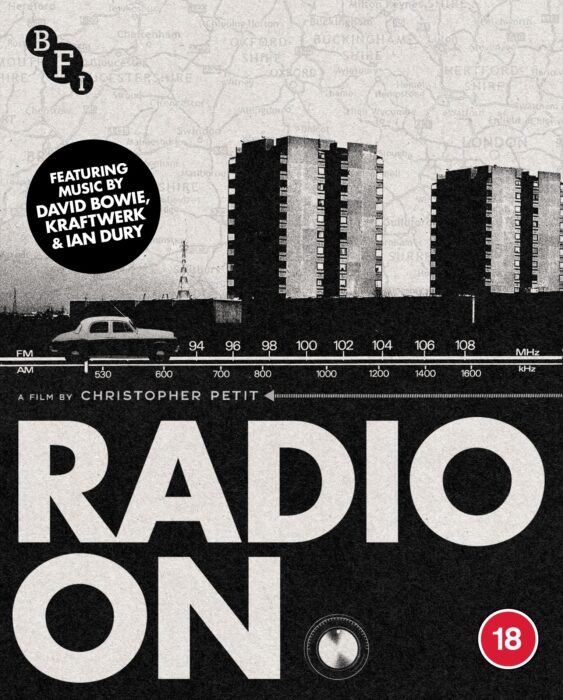 Jamie Havlin takes a look at Chris Petit’s existential road movie Radio On, a film with maybe the best soundtrack ever assembled in British cinema.

While in American movies like Two-Lane Blacktop, souped-up Chevrolets and Pontiac GTOs can rack up the mileage on huge stretches of interstate highways for days on end, here the lead character Robert’s clapped-out Rover only travels from London to Bristol and then onto nearby Weston-super-Mare.

It shouldn’t be surprising that the British road movie is a rarity. The A4 not only lacks the sweeping grandeur of Route 66 (which is over twenty times as long) but it lacks the mystique too. Not that this put off director Chris Petit. His main inspiration was German director Wim Wenders’ Road Movie trilogy of the mid-1970s anyway. Petit even invited him to become involved in the film and Wenders agreed to act as an associate producer. 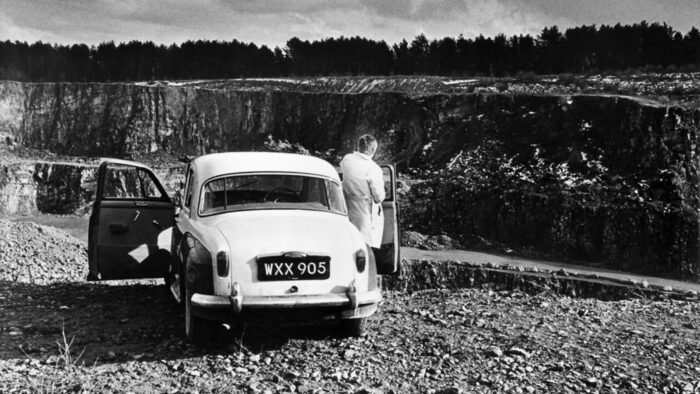 Radio On was shot during what the press dubbed the Winter of Discontent. Unemployment figures were shooting up, strikes becoming increasingly commonplace and the spectre of Margaret Thatcher becoming Prime Minister looked ever more certain as the Labour government’s poll figures spiralled ominously downwards during the coldest winter in years.

Conservatism at the cinema was taking a grip too in Britain. With audience figures on a historic downward trend, a safety-first policy was often being implemented in an attempt to maximise box office returns. Radio On’s experimentation stood in stark contrast to the glossy extravagance of The Bitch, the feelgood frolics of The Music Machine – a third rate British Saturday Night Fever – and Yesterday’s Hero, a Rocky rip-off with football replacing boxing.

Robert, played by David Beames, lives with an uncommunicative woman who is likely suffering with some form of mental health disorder. His drab journey to Bristol comes about as a result of him learning his brother has committed suicide. He sets out to discover more but if you’re expecting an elaborately plotted crime thriller with Robert playing detective, then forget it.

He visits the flat where his brother had been staying, unaware that he lived with a woman. She isn’t keen on answering his questions. ‘There’ll be an inquest,’ she insists, hoping to cut off the conversation. She’s been hassled by cops, who at one point even brought dogs to the flat. Is it a coincidence that over twenty men have been arrested locally in the last few days in connection with a pornographic films ring? Why would the police need to bring (presumably sniffer) dogs to investigate a suicide? 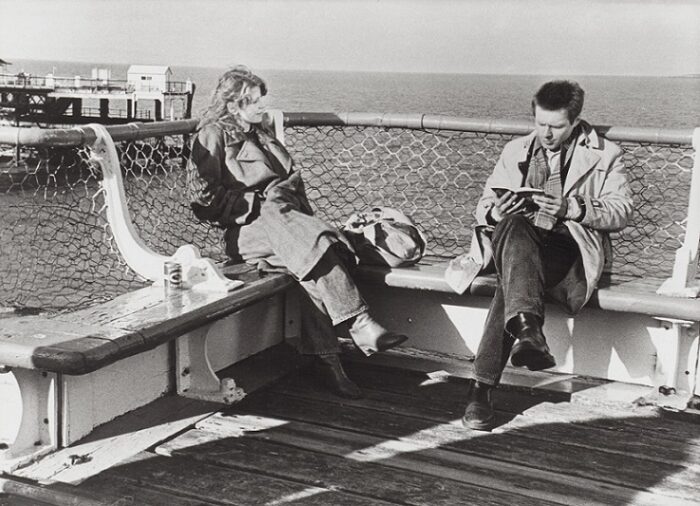 While in Bristol, Robert meets a German woman Ingrid (Lisa Kreuzer), who is hoping to re-establish contact with her young daughter. There are clues that she has been connected to a Red Army Faction style organisation but this is only one reading of why her former husband is denying her access to the child.

Much of Radio On’s minimalist plot is unclear. Petit isn’t big on dialogue either. Or action.

But he is a fan of music.

In one of the special features on this release, he talks about Radio On being ‘a film of sounds with pictures’ rather than the other way round. He goes on to explain: ‘Whatever kind of visual or dramatic deficiencies the film might have, I thought if you can actually create an interesting soundtrack then, in a way, you can take people with you, especially if you’re not conforming to expectations.’

Attracted by its cover, which prominently listed all the acts assembled on the soundtrack rather than any of the actors involved, I picked up a beaten-up VHS video copy in a secondhand shop back in the 1990s. I had heard of the film, otherwise it would have been easy to assume it was a music video compilation rather than a feature film.

Named after a lyric from Jonathan Richman’s Roadrunner, Radio On’s soundtrack is superb. The film opens with David Bowie’s Heroes/Helden, with his vocal arguably sounding more emotional while singing in German rather than English. Always Crashing in the Same Car from Low is also featured while three Kraftwerk tracks are utilised. There’s an ambient track by Heroes guitarist Robert Fripp and Devo – one of Bowie’s favourite new bands of the time – contribute their dislocated disco reworking of (I Can’t Get No) Satisfaction. Stiff Records are well represented here too. There’s Ian Dury and the Blockheads, Wreckless Eric, The Rumour, and Lene Lovich, whose Lucky Number began its climb up the British singles chart as Radio On was being shot. At one point she was joined there by a member of the Radio On cast.

Sting made a cameo appearance as an Eddie Cochran fixated garage attendant, just as his band The Police were becoming increasingly popular in Britain. A re-release of their second single Roxanne was about to give that band their first big hit and before 1979 was out, The Police had scored two number ones in Britain with major stardom beckoning. The rise and rise of Sting failed to put many bums on seats, though. Many years later, in his autobiography Broken Music, the singer spoke of going to see a midnight screening of the movie in London with his girlfriend. They made up half the audience. As the end credits rolled and the lights came up, he was amused to see that the other two attendees were its director and leading man.

The Evening Standard slated Radio On as ‘Restless and zestless, full of yesterday’s zombies!’ while NME also put the boot in. It was better received at festivals and some critics did praise it. ‘The work of a man with a real feeling for film,’ Philip French declared in the Observer.

Its stripped-down narrative was never going to appeal to everyone but while watching it again I did find it strangely hypnotic at times. Shot in luminous black and white it looks great too and if anybody can think of a better British soundtrack, please let me know.

Extras include a new audio interview with the director; a new interview with film writer Jason Wood; Radio On (remix) a 1998 digital video essay with radical disruption of the original soundtrack by Wire’s Bruce Gilbert; complementary films including Coping with Cupid (1991) by musician and author Viv Albertine and a collector’s booklet with new and archival essays by Chris Petit, Ian Penman and others.