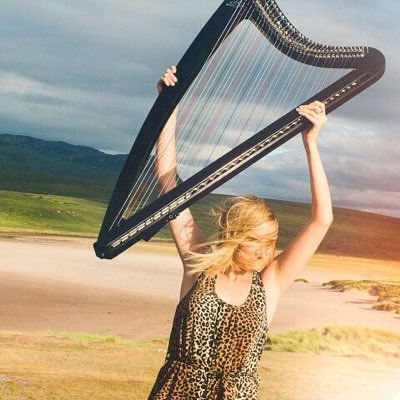 Regularly getting the nod from the broadsheets and the glossy folk magazines, the 2017 Folk Awards Musician of the  Year goes solo. Literally.

She’s turning out to be quite a prolific musician is Rachel Newton. She’s not only a vital part of The Shee and The Furrow Collective, she has  own trio work and solo career to juggle but now emerges as she does on the album art: enjoying  the  freedom all decked out in animal print fabrics she waves her harp around in abandon in the open spaces around the expansive surroundings beyond the  recording location of an old croft in Wester Ross (not the Westeros of GoT by the way, but the one perhaps made more famous by The Proclaimers).

Setting herself up for a totally solo outing she concentrates on the spacious sounds created by just her voice and acoustic and electro harps – spacious yet intimate, personal  and typically glass fragile,  beautifully arranged and recorded, with Matty Foulds literally knowing exactly which buttons to press.

Inspired, as many of us are, by her surroundings, there are calm airs and soft improvised pieces on harp that punctuate the flow; the obligatory smatterings of Gaelic  and the influence of Peggy Seeger and Walter Scott play their part and suddenly up pops  a nod to her beloved C&W with Jolene. Delivered with harp accompaniment naturally it’s a cover that adds a different, hard to define quality to a song perhaps adding  brings an further element of sadness to the well-known lyric.

Yes we could wax lyrical about how her exquisite playing crafts what seems like a perfect  soundtrack to solitude and how it conjures up visions of wild yet friendly highland vistas, but that would be over egging a cake that’s impeccable in its simplicity, like Rachel Newton herself, unassuming and modest.  West feels like a privileged glimpse into a private world.

Listen to Gura Muladach Sqith Mi from the album  here: