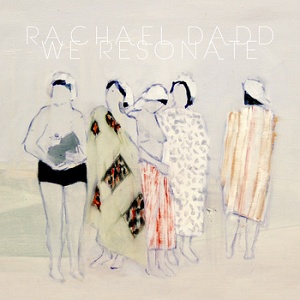 If there was a problem with the joint release of Rachael Dadd’s Make A Sentence single earlier this year it was that it’s pairing with ICHI’s Go Gagambo tended to overshadow it. Not because of any non-musical merits, but because her husband’s madcap but undoubtedly genius track caught the attention before the beauty and simplicity of her stunning track could seep into one’s ken. We Resonate redresses the balance easily.

Two years in the making, We Resonate is a triumph. Rachael’s often sweet angelic voice is encapsulating and wholly listenable. Taking folk as a base, she fuses it with Japanese influences and African rhythms to concoct her own very unique style.

To write pop successfully and then dare to mix with slightly off-the-wall contradictions displays confidence, but also a wanting to add an edginess and an inimitable slant lifts songs from good to excellent.

Album opener and single Make A Sentence is lovely. Typewriters tap away in the background as the upward strum of ukulele used as percussion combines with an orchestra of backing vocals of varying styles. Eventually, radio realised that the track was coupled with Go Gagambo and quite rightly started to play with affection being championed by Radio 6 and Folk Radio UK.

Current single Strike Our Scythes carries on from the opener in a similar style. The incredibly infectious choral line is sweet, peculiar and organic as it too utilises the voice as an instrument.

Bounce The Ball concentrates on one repeated line only and instead of sounding repetitive, its layered recurrence generates a wholly enjoyable experience as a clarinet joins the proceedings and takes over. Aside from typewriters, the album also features a steel drum, homemade xylophone and a box of matches – and even the heartbeat of Rachael’s baby in the womb!

Our Arms is nothing shortly of beautiful and anyone would be challenged to find a more charming song this year. How Dadd reaches some of the high notes that she does is a mystery, but they are stunning and majestic.

Travel has certainly inspired the song writing and the twelve tracks on We Resonate are all equally capable of standing up for themselves in their own right. An album of unparalleled beauty and quality ends with Let It Rise, a track which often threatens but avoids the temptation to overcomplicate and lose the moment.

All words by Paul Scott-Bates. More of Paul’s writing on Louder Than War can be found at his author’s archive. Paul’s website is hiapop Blog and you can follow him on twitter both as @saveonthewire for all On The Wire news, or as @hiapop. His blog is also on Facebook.