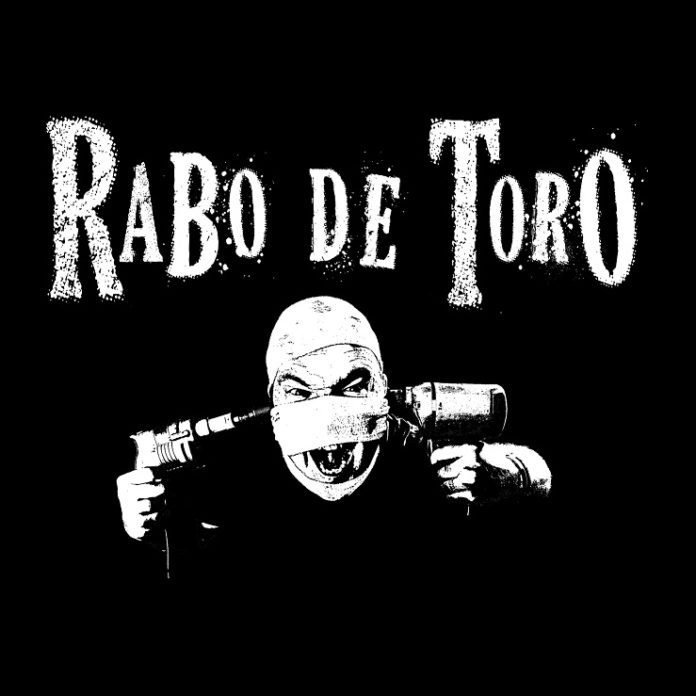 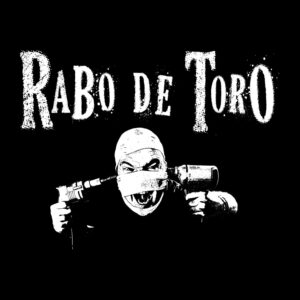 Rabo de Toro crawled out of a toilet in a disused spam factory near Rhyl in 1987.

Founded through a shared love of Russ Abbot and the Simon Park Orchestra, the band secured a live slot on Esther Rantzen’s That’s Life and Charlie Garlic was prosecuted by the DPP on 3 obscenity charges.

Debut single Violence HA HA HA reached number 57 in the Balkan Islands. The band are all keen arsonists and have been nominated for the Mercury Music Prize 5 times.

All of which is utter bollocks and was nicked from the bands home page; they actually escaped from some sort of Dr Evil music laboratory hidden in the hills overlooking Bangor, North Wales; whether the experiment had reached its conclusion is open to speculation but it’s clear the warped boffin responsible had been brought up on a diet of The Cravats, The Dead Kennedys and might have heard a Sleaford Mods recording.

This eponymous debut is a genuinely off kilter collection born of a love of Dadaism, each track a statement, a rejection of the traditional rock n’ roll format, as such it sounds like everything… and nothing else.

Opener ‘Fake News Knobheads’ is the nearest thing we get to a recognisable genre, a semi-hardcore thrash… until we get to the Fleetwood Mac “tell me lies, tell me sweet little lies” lyric delivered in a slaughtered soprano, before spinning headlong back into the thrash complete with proper Northern , not Welsh intoned lyrics which direct us to the twisted time signatures of ‘Bound By Woodbines’ complete with coughed lyrics, and a raucous guitar solo.

Tracks like ‘Fast Fake Pisstake’ is a headlong rush that arcs back towards Jello’s finer, more deviant moments, and deviant is exactly where we find ‘Big Swingers’ a unique mix of propulsive rhythms as we are treated to the genius line “the warm spray… speckled in my own faecal scat” in an address to male machismo.

‘Hello Stupidity’ takes a very personal swipe at Theresa May utilising the “strong and stable” retort, as the Rabo de Toro craft a musical collapse to match the hopes of the country.
‘Nurse’ is perhaps a bit too close to The Cravats, so much so I suggest The Shend should he hear this will think he has been burgled, however as Charles Colton stated “Imitation is the sincerest [form] of flattery.

By the time we arrive at ‘Nurse’ Rabo de Toro have really got their targets in their collective sights, within the taut fault lines, and mangled guitar textures we get the Rainbow kids TV theme reimagined on mescaline as the child abuse crimes of 70’s TV presenters are bundled up with a yelped tirade against fascists and Nazis.

Rabo de Toro have created a sardonic crackpot album, a collection of sound littered with absurd riffs and structures; there really is nothing like album closer ‘All I Want To See’ which were it possible to desecrates Russ Abbotts ‘Atmosphere’.

Rabo de Toro have assembled their own musical influences, they then proceeded violently kick them into their own mutated take on everything that came before them, and probably following them.

It’s a joyous, and frankly insane escapade that melts unconventional song-writing, elements of hardcore punk with cacophonous jazz, and against the odds results in an intriguing and genuinely challenging release.

January 17, 2013
We use cookies to ensure that we give you the best experience on our website. If you continue to use this site we will assume that you are happy with it.Ok