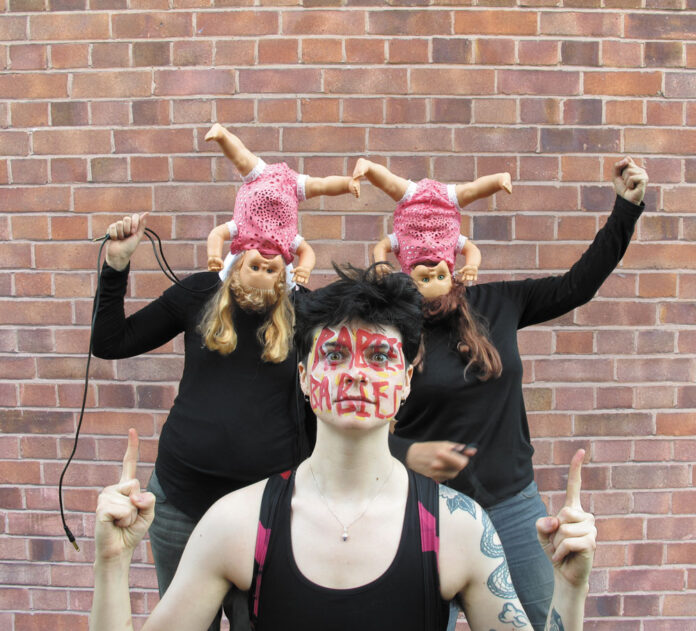 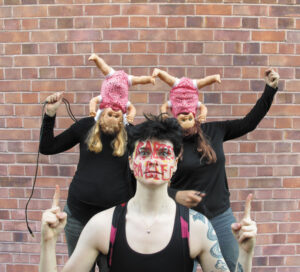 One or two of us can hear a noticeable difference between simple shouty three chord thrashy Punk Rock made in the early 80’s and Punk Rock made in this century by the same people. For a start, a lot of the Punk Rock stuff that 40 and 50-somethings are making today never seems to sound as thrilling as the results made by the same speed freak teens who were just starting to find their Doc Martin filled feet in the world three or four decades earlier. There are a few exceptions. Rabies Babies are not one of them. Rabies Babies weren’t making any kind of glorious racket at all before 1999 but what they’ve provided us with here is quite thrilling and could well have been made by a trio of speed freak teens high on life with an ability to jump over tube barriers without touching the sides.

They may not have been around in the early 80’s (on stage that is – but one or two of them may have been standing next to us at all the Anarcho Punk Rock gigs) but introduced themselves with instrumentation just over two decades ago and have since been appearing at the odd old-school Punk Rock gigs we still get in London, the odd DIY shows arranged outside of London, have paid the odd visit over to mainland Europe (in France they once had the stage invaded by a goat) and in 2004 turned up in the U.S with numerous scraps of paper, a modest sized MySpace page and played a tour of the East coast that included CBGB’s. They’ve not stopped playing for any noticeable amount of time during their existence either. No hiatus, no long breaks to write new tunes and concentrate on the next album. Rabies Babies simply just turned up and played and the paying public would whoop, smile, applaud and dance. Up until now the band have never released anything and no one (including the band) has ever seemed to care about anything other than enjoying a bit of a shout, making some noise whilst having a good night out and being lovely to one another at the bar or whilst stamping punters hands at the door.

Therefore, some people’s opinion of the band was just that of a bunch of people having a bit of a laugh before the main band came on. One or two may have forgotten about them by the time the key began turning in the front door only to be reminded again when they’d turn up again (and again and again and again with a few weeks off in between). Rabies Babies probably don’t care too much about that either we imagine. An evening out where Rabies Babies have been on the bill means a good night out, a few beers and some people have got to have a little dance whilst always being aware that someone else is quite often no more than an arm length away from helping lift anyone off the floor once the going gets tough.

We’re living in the latter half of 2020 and Rabies Babies have finally made a record after being together for twenty-one years then?
It’s been well worth the wait.
It’s a corker.
A real Mother Fucker crack your head open on an open fireplace UK Punk Rock racket (featuring the odd American).  They’re as much fun as Amyl and the Sniffers or Sufbort and they live in East London  (I haven’t read the press release so I’m sure one of them probably lives in Amsterdam or somewhere equally as exotic just to confuse matters even more and I should have mentioned the odd line-up change over the years but the current line-up features Lorna and Laura and Tabi).

This hits the spot. It’s a 10″ that displays some anger mixed with excitement and a wry smile. Any nerves they may have had recording this have eradicated any smugness. They’ve taken advantage of the opportunity to do what they do with decent people (recorded and mixed by Tim Cedar of Part Chimp) in a decent studio and you can hear the adrenaline flowing right throughout the EP. By their own admittance they may still have been without a release had Damaged Goods not invited them on board and they’ve risen to the occasion like a bunch of fifteen-year olds having just swallowed a six pack of smarties and a big bottle of fizzy pop.

This is also the sound of a band who still don’t give a shit (there’s nothing worse than any band who you can tell are trying too hard) but sound tight and relaxed, ticking all the right boxes. It’s fast, furious, short and sweet yet bitter too at times. The band seem to be fitting in more comfortably in 2020 than they may have done in 2000. They’ve done a great job here with the recording and performance and it’s available on white vinyl. You get a sticker, a postcard and a fanzine which contains the lyrics, there are 5 different coloured sleeves but there are only 300 available.

It may have taken a long time to arrive, but this debut Rabies Babies release is a fabulous collection of music the band have given us that does more than compliment the gigs they have played during this time. The personnel involved have simply just got on with their lives over past couple of decades, making costumes, making cartoon fanzines during major football tournaments, tending the allotment, bringing up children, looking after their friend’s cats, rabbits and budgies and generally being good people whilst not really considering releasing their music until now. However, the nudge from Damaged Goods was all that was needed, and these details all contribute to this an EP being as fabulous as it is.

Most people that make music can’t wait to show off any results of their hard graft and this is what makes this trio stand out from pretty much any other band on the planet at the present time. We hear the anger of Discharge, Hagar The Womb, Dead Kennedys, Kleenex, Discharge, Bad Breeding, Beastie Boys, the Slits and they’re the band we’d imagine Pussy Riot to sound like if anyone played us any Pussy Riot’s music. It’s the sound of a band that are reacting to the result of everything suddenly all coming together at the same time and it’s more than a decent snapshot of what Rabies Babies have always been doing.

The fun does stop for a while once the music kicks in though. The Angry side (don’t run away the flip is called ‘The Fun Side’)  opener Rape Is Rape Even If The Rapist Is In A Band That You Like is the band’s response to hearing awful things regarding sexual assault within the punk rock scene. On Yer Bike is Rabies Babies’ response back to other road users who are being dickheads towards people cycling to work or the pub in London. The lyrics are basically the responses the trio wish they’d have come up with at the time they were experiencing these events and live in the hope that the listener may be able to use one or two of these responses whenever applicable (for example GET THE FUCK AWAY FROM ME!).

Madhouse was once a song about the end of the world that over the years has morphed more into a song about leaving a party because it sucks (as far as we can work out), while Party House tells the story of the seemingly never-ending parties that the band have found themselves immersed in over the years. La La La  (we’re onto the second tune on the ‘Fun Side’ now by the way) exists so anyone around the world can sing along (in any language) and finally  I Fought The Floor And The Floor Won is a song that sums up the feeling many of us experience after a long weekend on the lash.

‘Waking up on Monday with bruises on my knees, I wish I could remember what I said or where I’d been’.

Most of us have been there at one time or another and those of us know that this feeling doesn’t need any more than three minutes to explain.

Job done – Now the waiting begins for the follow up in 2041.